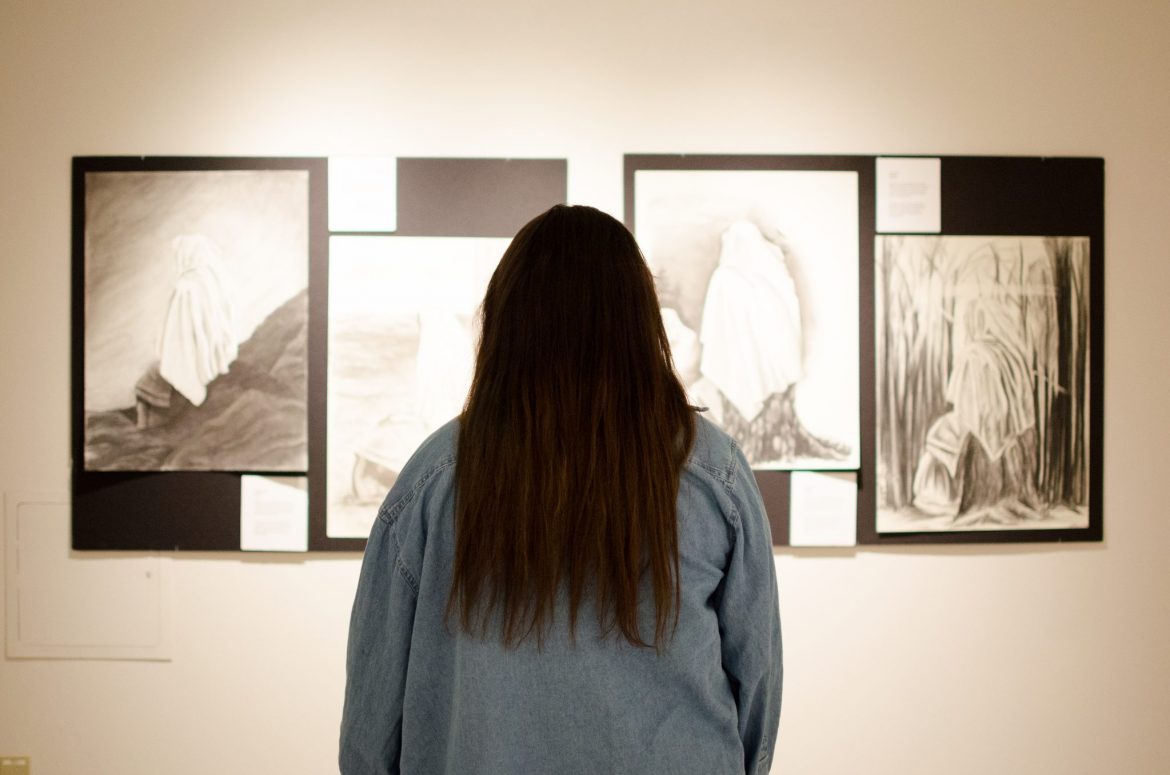 Senior Darci Flatley admires art in the Stephens Art Gallery. The gallery will host “A Town Known as Auschwitz: The Life and Death of a Jewish Community” beginning in October Photo by Macy Pate

The Stevens Art Gallery will feature a photography exhibit titled “A Town Known as Auschwitz: The Life and Death of a Jewish Community” for the month of October.

Fitting with the theme of this year’s Harding read, “The Hiding Place,” by Corrie Ten Boom, the traveling exhibit originates from the Museum of Jewish Heritage — A Living Memorial to the Holocaust.

The exhibit contains 61 framed photographs and multiple written stories of Jewish families and is meant to educate the audience on how the town of Oświęcim, Poland, looked and functioned like before, during and after it was renamed Auschwitz.

Dr. John Keller, professor of art and gallery curator, emphasized that this is not an art exhibit, but history. While photography can be art, Keller said this exhibit’s purpose is more geared toward documentation.

The story of Ten Boom and her family’s experience in the concentration camps is ultimately one of faith and forgiveness, according to Keller.

Junior Morgan Taylor had the opportunity to visit the first and largest concentration camp, Dachau, during her free travel while attending Harding University in Greece. Taylor said that visiting on Easter Sunday gave the day even more sentiment.

“It related so much to the fact that these Jews are holding onto something; they’re holding onto the fact that somebody’s going to save them,” Taylor said. “For me, getting to sit there and know that the God that I serve has already overcome something so horrible as a Holocaust, through the hope that we have in him that gives it a different meaning.”

Taylor was accompanied on the trip to Dachau by her friend, junior Madison Ramsey. Prior to their visit, Ramsey said that most of what she knew about the Holocaust came from movies.

After seeing the sites up close, Ramsey isn’t quite sure she can emotionally handle the exhibit.

Keller, Taylor and Ramsey said that remembering this part of our history is still relevant today.

“This was an act of hatred, racism and division. I think it is so relevant still,” Taylor said. “We have these sites like Dachau or Auschwitz that we have kept as the world and as a human group, and I think we keep them because we know that we need to be reminded of how easily we can be manipulated into performing these grotesque acts against each other. You cannot forget that. When we forget that, we’re lost again.”