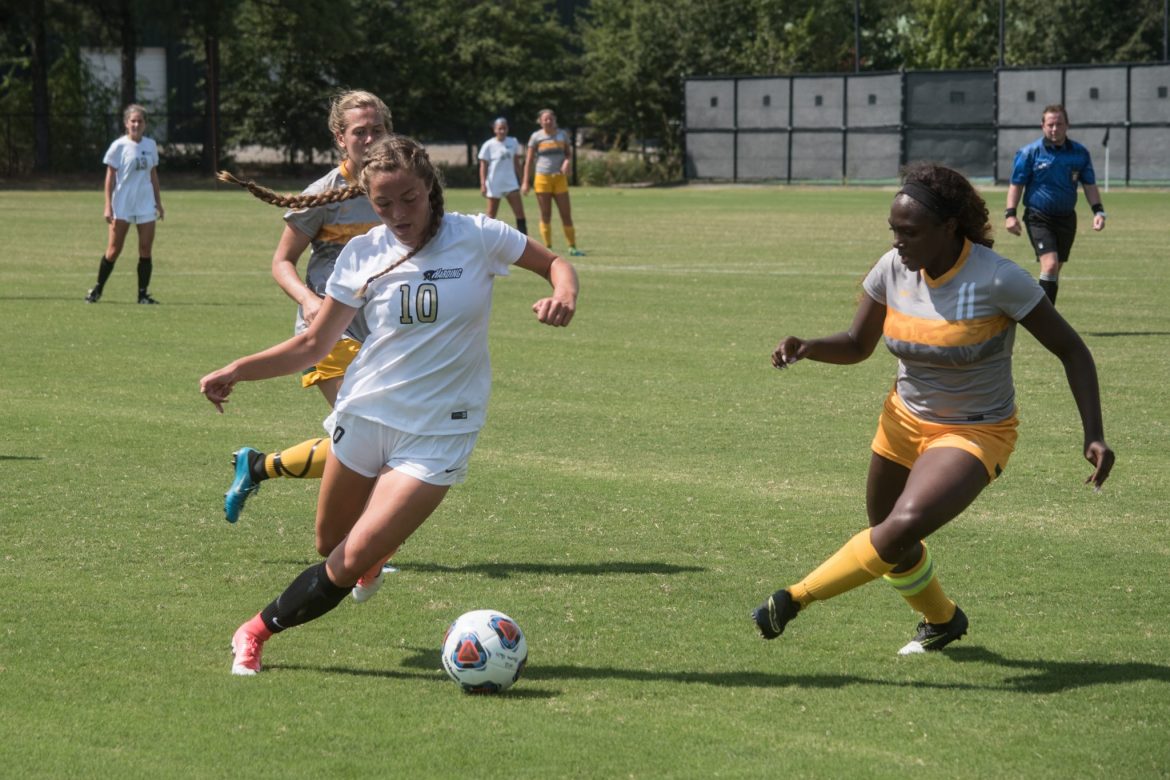 With 11 upperclassmen and 14 underclassmen, the older women have to pass on their experience. After losing key seniors last year, they have been adjusting to their new roles on a young team.

Starting the season 0-3 might have some people questioning their ability as a team.However, having won the Great American Conference championship the past two years, the Lady Bisons know what it takes to be at the top, and are working to get there again this year.

Their game Sunday showed some disconnect between play-making and passing. Even though Harding had more shots on goal, they were not able to convert them. Despite this, senior midfielder Emma Chilton was not too worried.

“Despite our record and this past game, we’ve honestly been doing pretty well,” Chilton said. “We’ve been passing and connecting well overall. It’s just a matter of putting it all together now.”

The Lady Bisons have been playing more physical teams compared to those they will face in conference play, which will benefit them in the long run.

Their first conference game is not until Sept. 21 against Southern Nazarene University (SNU), who was picked fifth in the GAC preseason poll. As of Wednesday, SNU is 2-2. This game will be the first of many for Harding that will be crucial to win in their quest for conference.

“We’ve been trying to keep a positive attitude from game to game,” Chilton said. “Getting our mindset before the game starts is how we can prepare for the next game and really focusing on our intensity.”

Rigorous practice and early mornings are just a part of women’s soccer at Harding and is what makes the difference in games.

“We have a lot of good moments in the game. Once we get the finishing touches in, we should be fine,” Reeder said. “The new girls have all come in ready to go and are really in shape. They have been doing well in fitness and early mornings; they’ve been a really big part of our offence so far.”

The Lady Bisons are incorporating a few freshmen into the lineup this season including goalkeeper Anna Claire Lewis.

“This is a whole different team. The pressure to me really is about how we take this puzzle, these pieces that we have, and form a puzzle that works for all of us,” head coach Greg Harris said. “I think we’re still trying to do that. I think when we figure this out, we will be OK.”

Having two young goalkeepers with sophomore Jessica Woessner and Lewis, there is still growing room for them to improve.

“I’m not saying we’ll win conference; I’m not saying we won’t. Right now we’re just focused on the puzzle,” Harris said. “If you look at last year’s team, they didn’t look like they could win conference until there was about six games left in the season. Each puzzle takes some time to figure out.”

Bisons ‘Hungry’ for Match up against SNU Tomorrow