Home Have you Heard About the Herd? 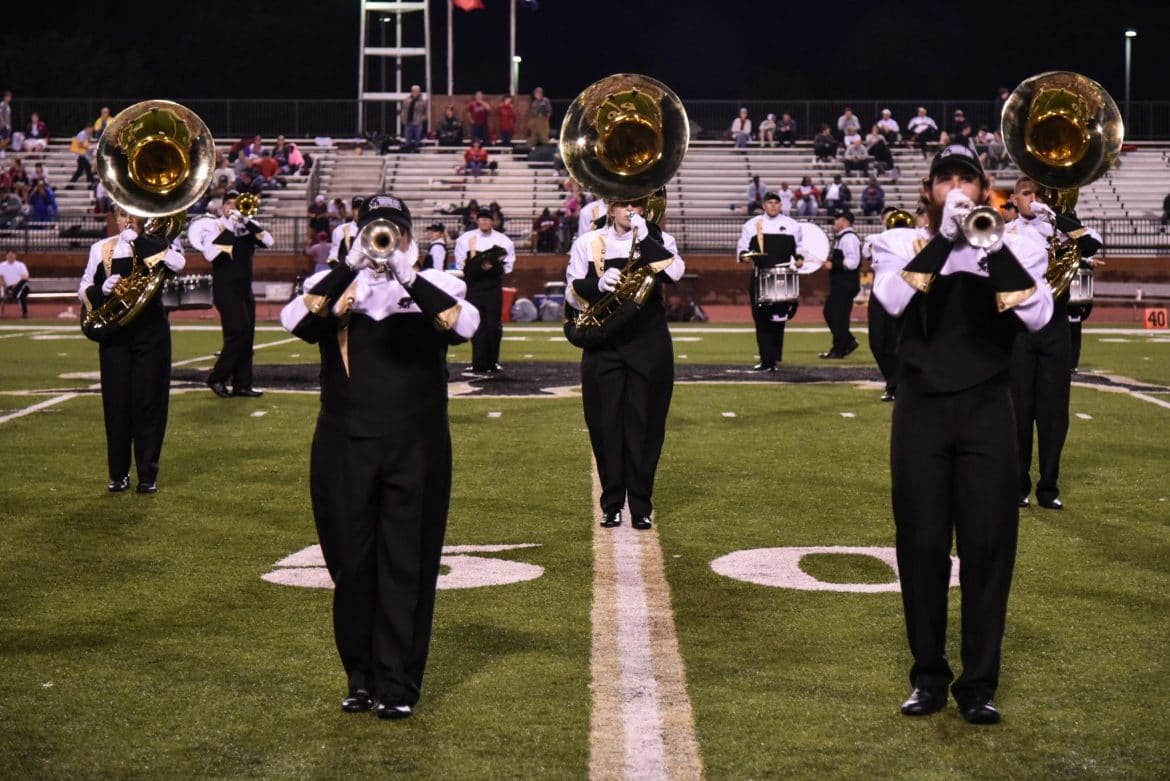 Sophomores Emma Erwin and Jessa Heavin, and seniors Kyle Alison and Devin Daniel perform at home Aug. 31 during halftime of the first football game of the season. The Thundering Herd has 93 members and performs at every home football game. Photo by Sterling McMichael

The Thundering Herd Marching Band is the largest and loudest spirit organization on campus. Every week they aim to promote the spirit of collegiate athletics and entertain the crowd while supporting Harding’s teams.

“I believe that this year will be a very special one,” Parker said.

On Aug. 31, the first half-time show, ‘Show of Champions’ was featured during the first football game, acknowledging the Athletic Department’s previous season of triumph and hope for another successful year.

“As a band, we wanted to collaborate with the Athletic Department on congratulating our sports teams on such a monumental 2016-2017 season,” Parker said.

There was a lot of excitement for that first game, sophomore Emma Erwin a tuba player in the Thundering Herd, said.

“I actually cried the first time I took the field at First Security Stadium this year,” Erwin said. “I was overwhelmed by positive emotions witnessing the amount of joy and excitement that was coming from the stands.”

According to Parker, this energy is one that is mirrored in the band itself.

“I love watching our band perform, seeing them smile and have fun playing music, and I want everyone else to see it too,” Parker said.

Parker and Erwin said the Thundering Herd is a close-knit group.

“We’re all one big family and God is the center of our family,” sophomore bass drummer, Lew Knapp said. “Everyone is accepted for who they are, regardless of their faith, color or looks, and we all come together in harmony.”

According to Parker the band is more than just a group of performers.

“It’s a big family get together each time we rehearse or perform,” Parker said. “They genuinely care for each other, celebrate with each other’s successes and help each other in times of need.”

Erwin said this support is part of what makes the Thundering Herd so unique.

“Compared to my high school, the herd spends a lot more time growing together emotionally and spiritually,” Erwin said. “I have made the best friends I’ve ever had through this program, and I often joke that all my bridesmaids will be in band uniforms.”

The Thundering Herd is making strides to strengthen this dynamic through community outreach and inviting past generations of band members to return this season. On Saturday, Sept. 16, the band will be hosting high school students from a variety of local high schools during the halftime show.

“They will join us on the field as we create a ‘mass band’ at First Security Stadium,” Parker said.

Later in the season, for the Homecoming game, Parker is working to put together one of the largest alumni bands in Harding’s history.

“We have a lot of momentum from that group and I am looking forward to seeing some great former students and band members join us on that field,” Parker said.

The band performs at all home football games, in addition to parades and other events.