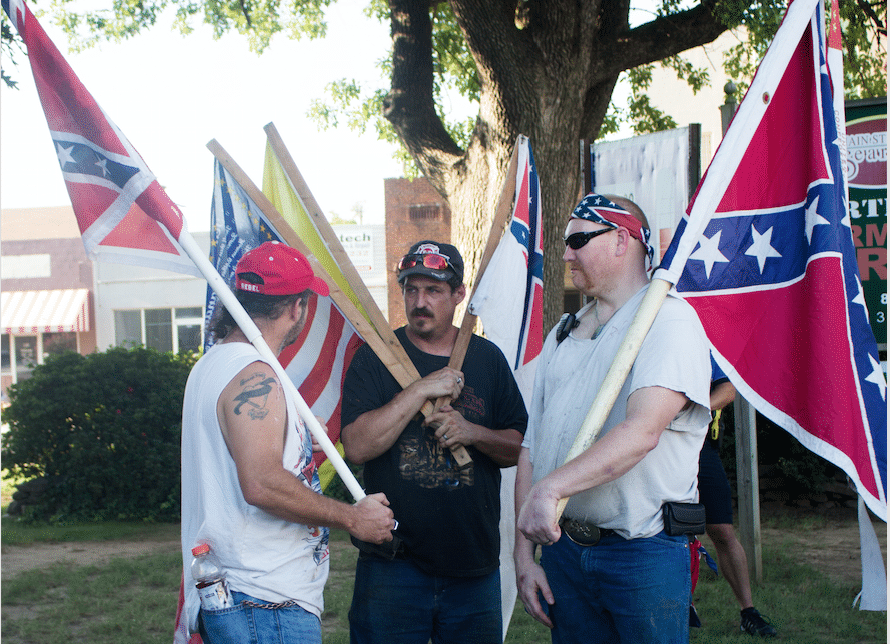 On Friday, Aug. 18, Arkansas residents gathered in front of the White County Courthouse in Searcy in response to an alleged threat by computer hacker group Anonymous to tear down a monument dedicated to Confederate soldiers of White County. Several monument defenders carried Confederate flags.

Stone County resident Billy Roper attended the gathering representing the ShieldWall Network, a white Nationalist group that strives to “think racially, take a stand locally.” Roper was strongly opposed to the alleged threat to the monument and came out to defend it.

“I’m here to stop whomever would like to take down the Confederate monument because they’re trying to destroy our people’s culture and heritage and history on the way towards white genocide, on the way to extinction … They’re working on making the people who founded this country a minority in it.”

During the demonstration, Roper was wearing a red “Arkansas Engineering” T-shirt similar to that of former University of Arkansas (UARK) student, Andrew M. Dodson, who was photographed at the white nationalist rally in Charlottesville, Virginia, on Aug. 11. Roper, along with UARK engineering professor Kyle Quinn, was misidentified as Dodson and received threats following the release of photos from Charlottesville.

“I got dozens of death threats — threats to rape my wife, to kill my family. … I’m completely fearless because the alternative, allowing our country to be destroyed and my people to become extinct — I’m willing to die for that, and more importantly, I’m willing to kill for that,” Roper said. “And so I wore this shirt because they accused me of being in Charlottesville, and I wasn’t. But I have a lot of friends who were, and I respect the guys who were there.”

Quitman resident Chad Fielding arrived at the Courthouse to defend the monument. He grew up near Searcy, where several of his relatives attended Harding. He said the monument, like the statue, represents his heritage.

“That statue represents everything America stands for… I have to come defend my statue,” Fielding said. “I believe ‘heritage not hate’ … (the Confederate flag) represents the South; I am from the South. You can’t try to erase my heritage because people will still remember it. This is us out here reminding you that when you try to erase our heritage you have to peacefully divert their attention to something else. That’s why we’re here.”

“(The statue) is a part of history just like the Malcolm X monuments or Martin Luther King monuments — that is a part of our history. We don’t want to tear down those monuments … that is what has turned us all into what we are today. Americans need to all stop fighting each other and realize there are a lot bigger fishes to fry than to worry about a little statue at a little courthouse in the middle of Arkansas.”

Junior Coleman Branum visited the protest, but said he believed the statue should be taken down in respect for Americans who are offended by the Confederacy.

“I understand how (the monument) relates to people’s ancestry here, but I also feel like a lot of what it stands for to a lot of people today is mostly negative.To anyone who wanted it to come down, it would be a race issue.”

Dr. Katherine Dillion, associate professor of English, visited the courthouse gathering with a similar perspective.
“I believe that just like in the Bible where it says if something is a stumbling block to your brother then you should give it up, and if this were stumbling block, which it is … It’s not about denial (of the history), it’s about celebrating it, and if you’re standing there in the shadow of that as a celebration that the South tried to defend slavery and keep people down, that’s the shameful part about our heritage,” Dillion said. “It’s one that has to be addressed but not celebrated, and I think it needs to be taken down, but I do believe it should be taken down in a peaceful manner.”

Despite the alleged threat, no actions have been taken to destroy or deface the monument, and the demonstration remained a peaceful one. Local law enforcement kept watch as protesters shared their views on the courthouse lawn.