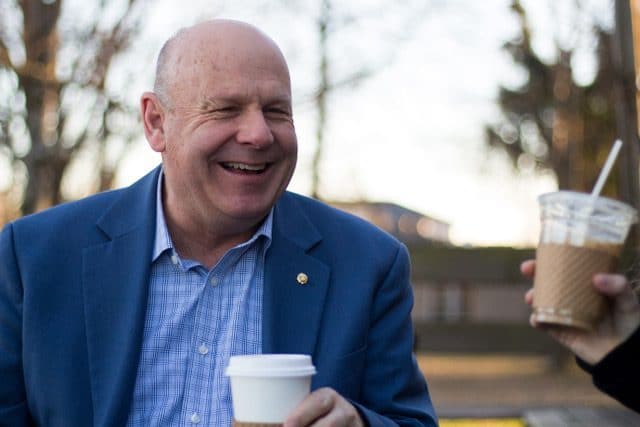 The 2017 Petit Jean yearbook, “Found,” announced this year’s dedication recipient to be Dr. Ross Cochran, professor of Bible, on Thursday.

Each year the dedication recipient is determined by nomination from the student body from among the university’s full-time faculty members. All students are encouraged to nominate a faculty member who has made an impact on all aspects of their lives and education at Harding.

“There probably isn’t anyone more deserving than Dr. Cochran,” sophomore Julie Plunket said. “He was my first Bible teacher. He knows a ton about the Bible and the New Testament, but he taught me more about how to live a Christian lifestyle. … He is a man of very good character who lives out his Christian faith, and it has been very cool to see, especially with Nita, after she passed away — the way he handled that and the way he did chapel. He is incredible, and I have learned a lot from him.”

After battling the return of her cancer for 21 months, Nita Cochran, Cochran’s wife since 1981, died on May 31, 2016. With the support of many friends and family, Cochran spoke to the student body about his loss in chapel on September 9, 2016. He spoke about grief, hope, trust and comfort as well as the blessings of his experiences with Nita and how she impacted his life.

“Dr. Cochran found home and comfort at Harding, and that’s what this book has aimed to capture,” Kaleb Turner, editor-in-chief of the Petit Jean yearbook, said. “He has dealt with incredible loss and struggle, but through it all, he has embodied the faith and perseverance of true Christian character. He’s found his people in his struggle, and that’s something that all students can connect with during the years at Harding. … His students care about him and he cares about them. It’s as simple as that. They’ve found each other as strongholds during struggle and life, and they cherish that community that has been established here at Harding.”

“It is very humbling,” Cochran said. “We sometimes as teachers honor our colleagues, but what teacher doesn’t what to be appreciated by their students. And when you think about the high character of the student body, I don’t know of a greater honor. This has been a hard year, and I remember I started the year pretty early talking about Nita in chapel, and when I first heard this I thought, ‘This is partly Nita’s.’”