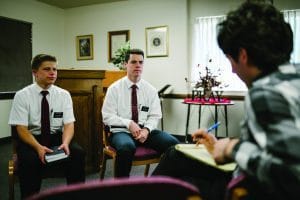 According to Elder Karter Ockey, one of two Mormon missionaries serving in the Searcy ward of Latter Day Saints, young Mormon men are encouraged to embark on the traditional two-year missionary journey, though they are not forced to.

“It’s a priesthood duty that you are just asked to do,” Elder Ockey said. “We have a mission president over all the area, and his calling is to pray and seek revelation and seek out where missionaries are needed.”

Elder Ockey, 20, is from a small town in southern Utah. His companion, Elder Austin Smith, 19, is from Spokane, Washington. Both are currently in the nineteenth month of their two-year mission. Elder Ockey has been serving in Searcy for five months; Elder Smith for only two weeks.

“Definitely long before a missionary leaves home, they have places they want to go and places they would like to go, but ultimately it’s up to the Lord where they will be sent to accomplish the most work,” Elder Smith said. “Actually, I love Arkansas. It’s pretty great, I guess.”

Mormon missionaries are sent out two by two, and according to Elder Ockey, they do everything together because of Christ’s calling for testimony to take place in the presence of two or more witnesses.

“Don’t get me wrong, it takes some getting used to,” Elder Ockey said. “Elder Smith just got here … so in the first couple days, you have to try to get to know (the) other, see how each other works, things like that. Pretty much the only time we aren’t together is when we are in the bathroom. Other than that, we are always together.”

According to Dr. Shawn Daggett, professor of Bible and director for the Center for World Missions, there is something to be admired in the Mormon’s dedication to sharing their faith. Daggett returned this week from Boston with a class of students studying the history of mission work, where they met with 11 young Mormon elders and sisters, as well as one of the mission presidents for the area.

“(The Mormon missionaries) we met (this week) in Boston have been working harder at being patient, kind and gentle in the face of rejection,” Daggett said. “That is what Jesus taught us to do, after all: if someone strikes one cheek, turn the other also.”

Every day, Elder Ockey and Elder Smith wake up at 6:30 a.m. and plan out their work for the day. Their daily proselytism generally consists of door-knocking and handing out copies of the Book of Mormon, but they also take advantage of lesser known outlets for missionary work, including pick-up basketball games, frisbee golf and various service projects.

“(Rejection) can be pretty discouraging,” Elder Ockey said. “I know for the first two or three months of my mission, the thing that really got me was being seen as the weird Mormon guy walking around in a shirt and tie while people look at me and go, ‘Hey look at those Jesus people,’ or whatever.”

However, what he sees as little miracles get Elder Ockey through each day.

“The Lord will always give me the boost I need, even if it’s just someone offering us a glass of water, or something like that,” Elder Ockey said.

Both Searcy elders said that their desire to serve in the mission field is rooted in a desire to share the Book of Mormon with others. However, according to Elder Ockey, this desire is often roadblocked by a generation that does not have an open mind.

“A lot of people are not willing to receive answers from different places and look for answers in different places,” Elder Ockey said. “Mormonism and Christianity agree on one important thing, and that is that Jesus Christ is the son of God. I definitely think this generation in general is trying to find the answer to that question. But one of the things we talk about is that once a person is ready to answer that question for themselves and finds out for themselves that Jesus Christ is the son of God, they have to also be willing to change their life because of that knowledge. … I think people today just want to know things, but they don’t want to have to do things.”

According to Elder Smith, everything that Mormons teach comes down to one question: Is the Book of Mormon true? But even for a young man raised in a household of Latter Day Saints, this is not necessarily an easy question to answer.

“I really had to take time and learn for myself if (the Book of Mormon) is true or not,” Elder Smith said. “I had a small testimony when I came out. I could say the words, ‘I believe this is true,’ but I hadn’t been tested, and I hadn’t learned for myself yet.”

Elder Smith said that it took the first year of his two-year mission to find the conviction he had been seeking.

According to junior Bible and missions major Emily Reid, she is amazed at the fact that there are 79,000 Mormon missionaries preaching their message around the world.

“Are we taking as seriously the task to go into all nations and make disciples through the spirit of Christ?” Reid said. “In comparison to the proselytism of those of us young adults at Harding, I do believe it is a wake-up call.”

Reid said that although it is impressive for young people to spend two years on a mission, missionary work can take on many different forms.

Daggett said that, with missionaries of all faiths and backgrounds, he admires their willingness to step out of their comfort zones.

“It’s impressive that so many Mormon young people dedicate two years of their lives to missions,” Daggett said. “But it’s even more effective and Christ-like for our Harding graduates who spend three or four years preparing for a specific field and learning what they can about that culture and language, to be able to share with them not just for two years, but for a lifetime. Paul says in 1 Thessalonians 2:8 that we ‘not only shared the Gospel with you, but we shared our lives as well.’”

As their mission prepares to come to an end, Searcy’s elders said they are excited to return home, attend college and find spouses. According to Elder Ockey, these last two years have been an adventure he will never forget.

“I’m pretty sure, for the next 10 years, most of the stories I tell my friends and my family will be stories from my mission,” Elder Ockey said.