Home Sports ‘A Team of Destiny’

‘A Team of Destiny’ 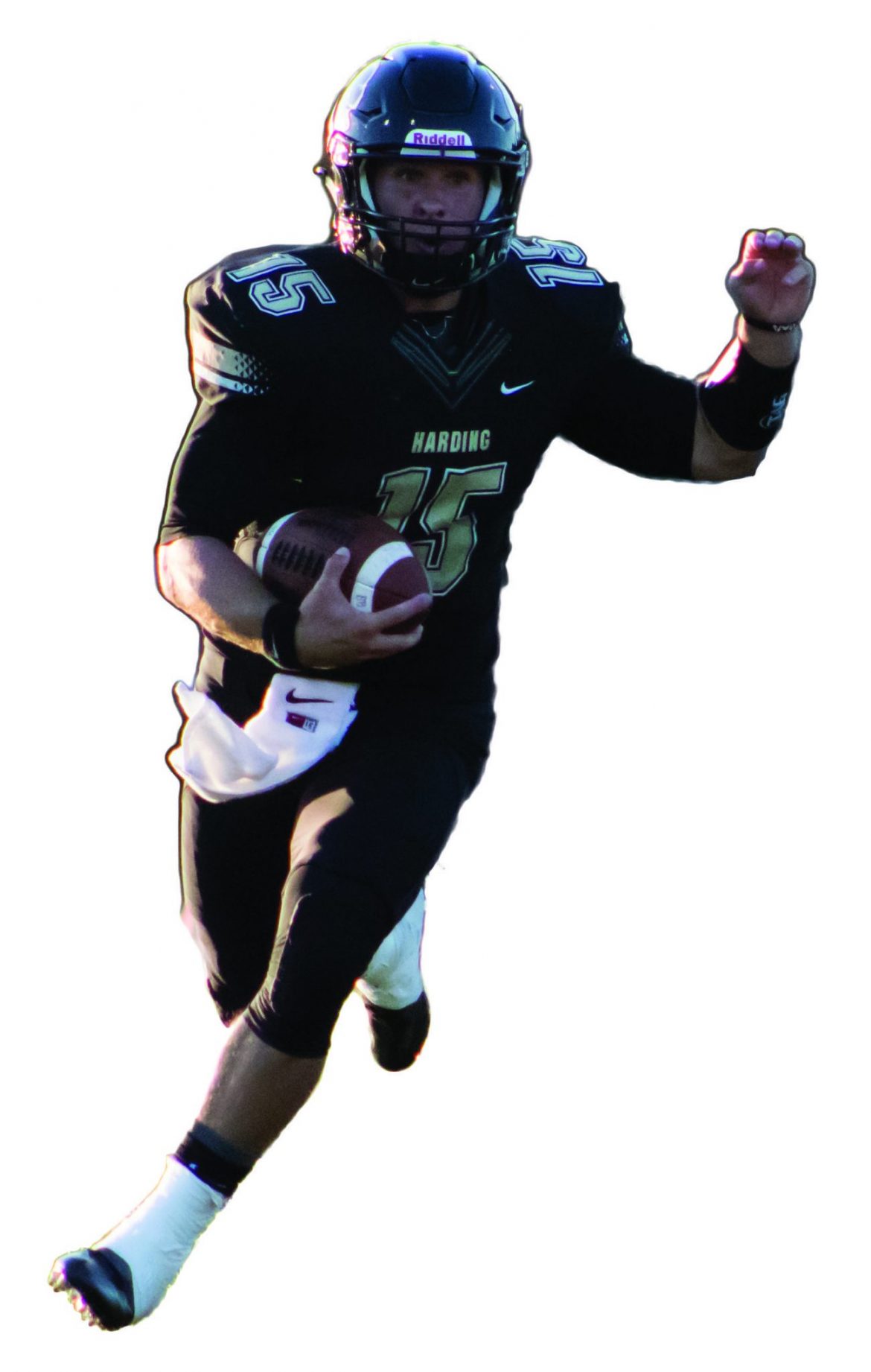 The fifth-ranked Harding football team rallied from 10 points down in the fourth quarter and kicked a game-winning field goal in overtime to beat the University of Sioux Falls (USF) 27-24 in the second round of the NCAA Division II Playoffs on Saturday, Nov. 26. With the win, the Bisons improved to 13-0 this year and reached the NCAA Division II Quarterfinals, extending head coach Ronnie Huckeba’s final season another week.

“This is a team that knows how to win,” senior quarterback Park Parish said. “I think in every championship run, in every run that you see — whether it’s basketball, whether it’s football or whatever — there are some close games where you look back and say, ‘man, they were really close to losing it.’ The thing about those teams is they find a way to win, and that’s what we did.”

Parish led the offense, rushing for 121 yards and throwing for 49 more, but the GAC Offensive Player of the Year was sidelined for parts of the fourth quarter due to a shoulder injury. Despite three first half turnovers, the Bisons led 14-10 at the break due to a strong defensive performance.

“We went into halftime and we had so much confidence because we knew their tendencies, and they were holding true to what they had been doing all season,” senior linebacker Benjamin Shields said. “We were able to pick up on formations and plays that they were running, so it was a big deal for us to be able to have that confidence at halftime.”

Shields recorded six tackles and junior defensive back Daylan Markham had 11 as the Bisons held USF to just 306 yards of offense, 222 yards off their season average.

“Our defense played great,” Parish said. “That was a very good offense they played against, and they’re very good at what they do which is run the ball and eat the clock up, so I thought our defense did a great job of shutting them down and getting them off the field.”

Trailing 24-14 with 10 minutes left in the game, sophomore quarterback Terrence Dingle led a 75-yard drive before Parish returned to cap it with a 1-yard touchdown run and trim the lead to 24-21. Parish said that he was proud of the way his backup played under pressure.

“Terrence was clutch,” Parish said. “He just kind of got cast into it when the bullets were flying and he did a fantastic job of coming in, making plays and managing the offense.”

After the defense forced a USF punt, the Bisons drove 57 yards in less than a minute to set up a junior kicker Tristan Parsley’s game-tying 47-yard field goal with six seconds left, the longest of his career.

“(The kick) was gutsy,” Shields said. “It’s not every day that you see somebody have the fate of the entire time on their back like that in the biggest game in program history, you know, so to step up and make that was huge. Sometimes they go through and sometimes they don’t. This time it did.”

Shields intercepted a USF pass on the third play of overtime and three plays later Parsley’s 35-yard field goal secured the win, clinching the Bisons’ first ever spot in the final eight of the NCAA Playoffs. It was the first time in Parsley’s career that he made two field goals in a game.

“I tried not to think about it too much,” Parsley said in a postgame press conference. “I just asked the Lord to help me make the kick like I always do, and the Lord provides.”

Head coach Ronnie Huckeba and the Bisons will play the top-ranked, defending national champion Northwest Missouri State University Bearcats on Saturday, Dec. 3. According to Parish, the team is embracing the challenge of playing the nation’s best team.

“They’re the real deal — you don’t win 27 ballgames in a row without being the real deal,” Parish said. “We are definitely faced with a challenge, but it’s one that we feel like we’re ready for. Everybody wants a chance to play the best because the only way to be the best is to beat the best, so we’re excited for the opportunity and we think we have the team that can beat them.”

While Huckeba’s final season at the helm of the Harding football program is already an historic one, he said his team believes it will keep winning.

“We feel like we’ve been a team of destiny up to this point,” Huckeba said. “There is not any doubt on our sideline.”

The Bisons will kickoff against the Bearcats at 1 p.m. on Saturday in Maryville, Missouri.