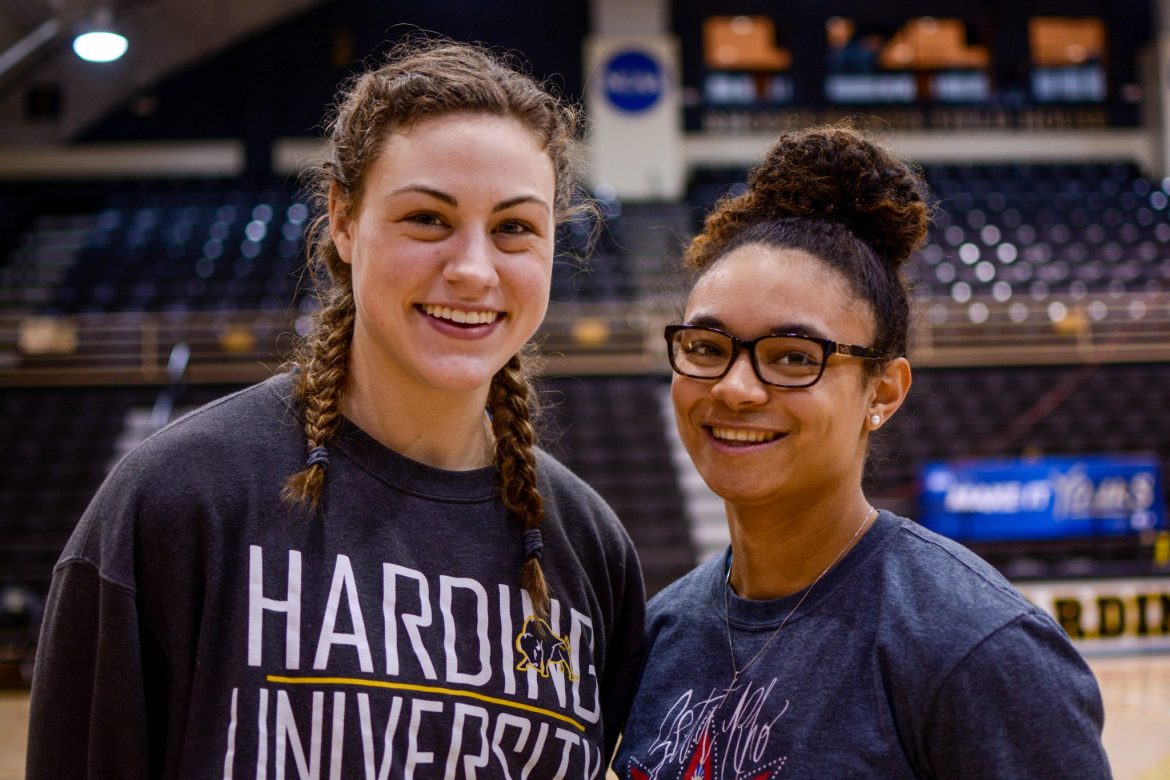 Two Arkansas natives who initially took their talents to Division I basketball teams have found their way back to the Natural State to play for the Harding Lady Bisons. After playing just a year ago at Missouri State University (MSU) and the University of Nebraska Omaha (UNO), respectively, sophomores Riley Rose and Caroline Hogue are now major contributors for head coach Tim Kirby, whose Lady Bisons are 2-0 in Great American Conference (GAC) play.

Hogue attended Baptist Preparatory School in Little Rock, Arkansas, where she averaged a triple-double per game during her junior year. She blocked a state record 933 shots in high school and blocked 89 more in her freshman season at UNO, but she said she chose to transfer to Harding to be closer to home.

“I went up there and it was nine hours away from home,” Hogue said. “I liked the coaches, I liked my teammates, but I came back home because it was so far away. I liked the coaching staff (at Harding) and I had played with almost half the girls on the team before, so it was a good transfer.”

Rose also came home to Searcy to be closer to family after one semester and joined the Lady Bisons. In high school, she averaged 13 points and four assists per game at Harding Academy before signing with MSU. Rose said that her new teammates have made the transition easy.

“The environment they created was something that drew us in even before we got here,” Rose said. “It was really easy to feel at home, and that’s all due to the teammates that we have. They make it fun here. Some days you don’t want to come to practice, but you know who’s going to be there, and they’re worth being around.”

As two of the team’s top four scorers, Hogue and Rose add talent to an already proven squad, led by senior point guard Andi Haney. Haney was a part of back-to-back NCAA Tournament teams in 2014-2015 and according to Hogue, has been influential in bringing the Lady Bisons together.

“I’d say Andi is definitely the glue to this team,” Hogue said. “She’s the leader and the person that pushes us every day in practice.”

Rose also acknowledged the leadership ability of Haney and the impact she has had on the sophomores’ transitions into major roles on the court.

“Andi kind of made a path,” Rose said. “She made it easy for both of us in the transition and her leadership on and off the floor made everything easier for us and for the other girls to get to know us.”

With new talent and old, the Lady Bisons were picked first in the GAC preseason poll and currently boast a 4-1 record. Rose, the Lady Bisons’ leading three-point shooter this season, said that staying focused on the present will help the team live up to its high expectations.

“We have to take it one day at a time,” Rose said. “We can’t take the team we have now and go straight into the conference tournament and expect to do extremely well, so we need to take each practice, each play, every opportunity to just try and get better and gain experience from it in order to be successful in the long run.”

While Hogue and Rose are making a difference on the court, they both know that success will depend not on their individual performances but on the team’s ability to play together. Hogue said that the relationships off the court have helped the team have a selfless mentality which will lead them to success in the long run.

“I feel like I’ve had a lot poured into me physically, spiritually, academically and just with all the good people around me here,” Hogue said. “Now we just have to stick together and stay focused on trying to be the best team in the conference and the rest will take care of itself.”

Sports at ‘The Manor’

Giving a New Twist to a Classic Christmas Play