Giving a New Twist to a Classic Christmas Play 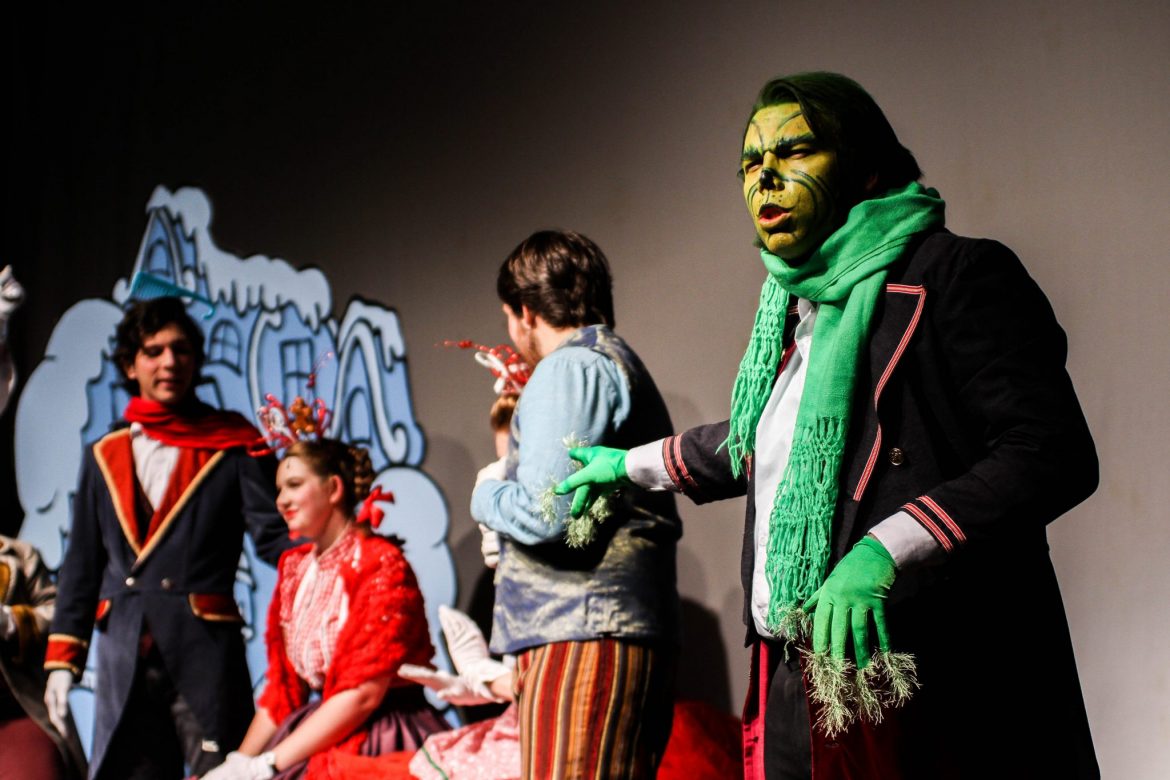 By Katie McDonnel and Jaisa Hogue

Harding University students and faculty are performing “A Seussified Christmas Carol,” a twist on a Christmas classic, Dec. 2-4 in the Ulrey Performing Arts Center to raise funds for Hope Cottage.

Senior theatre major Holly Cannon, student designer, director and costumer for the production, said the show came together after the cast of “The Seussification of Romeo and Juliet,” her junior one act project, saw her directing “A Seussified Christmas Carol” at Center on the Square Kid Stage.

“The cast offered to pitch in the money for the rights, we just needed a space,” Cannon said.

Cannon approached the Harding Department of Theatre to ask if they were interested in contributing to the show, and the theater allowed the Campus Players, a theatre student organization, to back the production.

“The kids love the colors, but the adults get cracked up seeing the characters change on stage and be different and try and rhyme everything,” Cannon said.

The show is a benefit for Hope Cottage, a shelter and hotline for women in White County who are victims of domestic violence. The show is free, but donations are encouraged, and all profits go to the charity.

There has been so much interest in the show that another performance has been added for a matinee on Sunday, Dec. 4 at 2 p.m. There are only eight cast members, but over 30 roles. Several cast members have taken on multiple roles, such as junior Zach Slomers who plays Jacob Marley, Bob Cratchit and an assortment of other characters.

“My favorite part of being in the show is getting to do this with my friends and getting to goof off,” Slomers said. “It’s funny enough for grown-ups and goofy enough for kids.”

Peter Bloedel, who has created a variety of Seuss-themed plays based on classic literature, transformed Dickens’ original verse into one that rhymes, but Cannon said the script stays very true to the original — word for word in some parts. The characters vary from the ones in “A Christmas Carol;” for instance, instead of Tiny Tim there is Timmy Loohoo with a candy cane crutch, and several elements of the Grinch have been incorporated into Scrooge’s character, portrayed by alumnus David Goble.

“It still has the same sweet, touching moments that are in ‘A Christmas Carol,’ but it’s a lot easier, not as dark, not as harsh,” Goble said. “It’s kind of like a Flintstone vitamin, you still get all you need, but it’s delicious and chewy.”

Senior Penny Turpin, who played Juliet in Cannon’s “The Seussification of Romeo and Juliet,” said that the cast has grown immensely since their last “swing at Seuss.”

“I think Seuss is going to be more than just giggles and glitter,” Turpin said. “It tells a wonderful story, almost like a parable, that will be sure to make every person — no matter the age — feel sentimental.”

Recap of the Arkansas Ballot