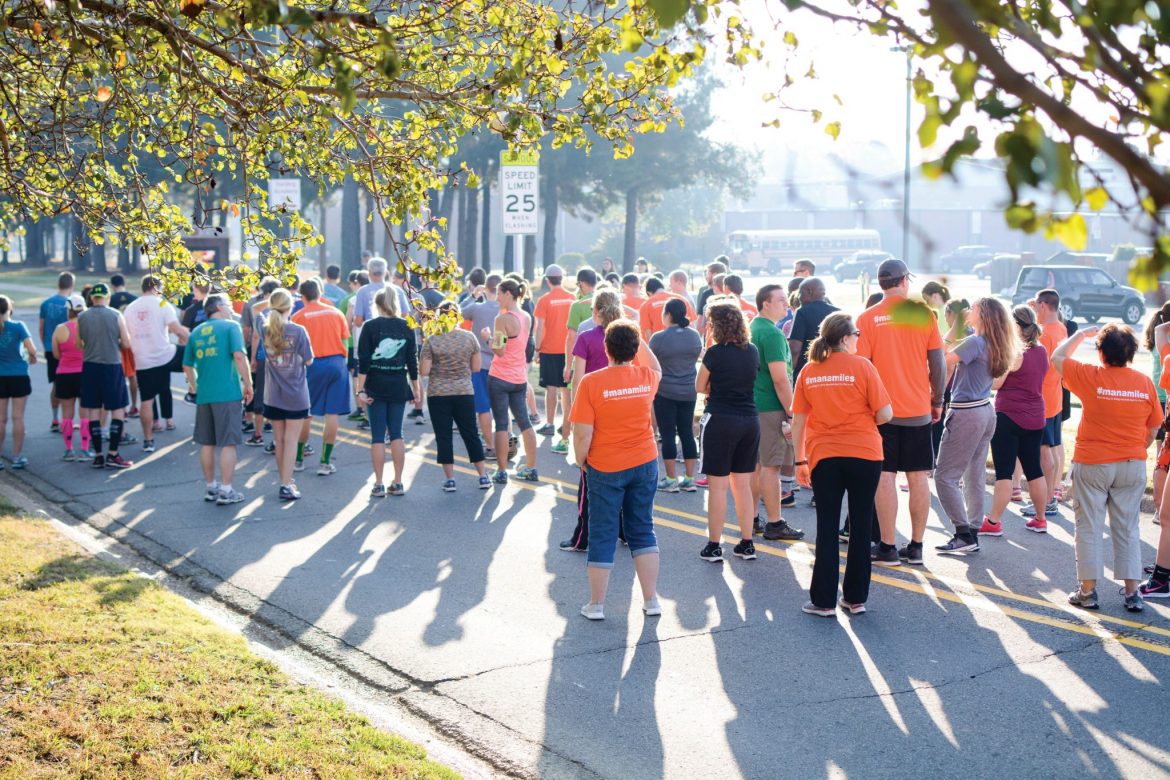 Homecoming at Harding is typically a full weekend of familiar activities. This year, however, a traditional 5K began a new chapter for on-campus service opportunities.

Andrew Baker, assistant professor and director of the Mitchell Center for Leadership and Ministry, partnered with the kinesiology department to use the annual Bison Stampede 5K to get students involved in fighting against malnutrition. Using the Harding Service Central app that launched during the spring of 2016, students can put their daily steps to good use.

Mark Moore, CEO of MANA Nutrition, approached Baker earlier in the year to evaluate ways Harding could spread awareness about malnutrition and encourage students to get involved in combatting the issue.

Their discussion led to “MANA Miles,” — an initiative that students can participate in through downloading the HU Service Central app. The app now has a pedometer that is able to monitor the number of steps one takes by clicking “track.” All the user needs to do is enable the feature.

The goal is to get to 10 million steps logged before the end of the semester. Every 2,000 steps equals a mile of walking, and a packet of MANA is earned after every mile walked.

“Your steps can count to help somebody? Sign me up,” Baker said. “A walk across the Front Lawn or a run around the track — why not let those steps count?”

The plans for the partnership between MANA and Harding students do not end with the semester. Baker hopes that this semester’s process will encourage students to pursue additional fundraising efforts of their own.

Senior electronic media productions major Alex Valdes said he jumped on board to help promote the 5K as soon as he heard about the mission of MANA.

“The statistics of starved and dying children was really eye opening to me,” Valdes said. “I immediately felt the need to support the mission of Mana in every way I could.”

Valdes said he loves working on projects like this where he can help raise excitement and awareness for a cause.

“I hope that viewers were inspired by (my promotional video) to go run the 5K, but more importantly, I hope they were inspired to take a ‘step’ in making this world a better place,” Valdes said.

The plans for the partnership do not stop at the end of the school year. As an additional incentive, the team is considering the possibility of letting students experience first-hand how their steps are helping.

“Plans are in the works to have a few students selected to travel to Africa next summer to deliver the MANA,” Baker said. “Maybe the students who took the most steps. The plans still need to be worked out, but the idea is there.”

Ultimately, the purpose of the endeavor is to make a difference — something Baker sees as a completely attainable objective.

“MANA’s goal is real simple. They just want to alleviate malnutrition around the world. Alleviate starvation. Alleviate poverty. We can knock out malnutrition. That’s doable. That’s a measurable thing we can do, and so maybe this little app will help motivate people.”