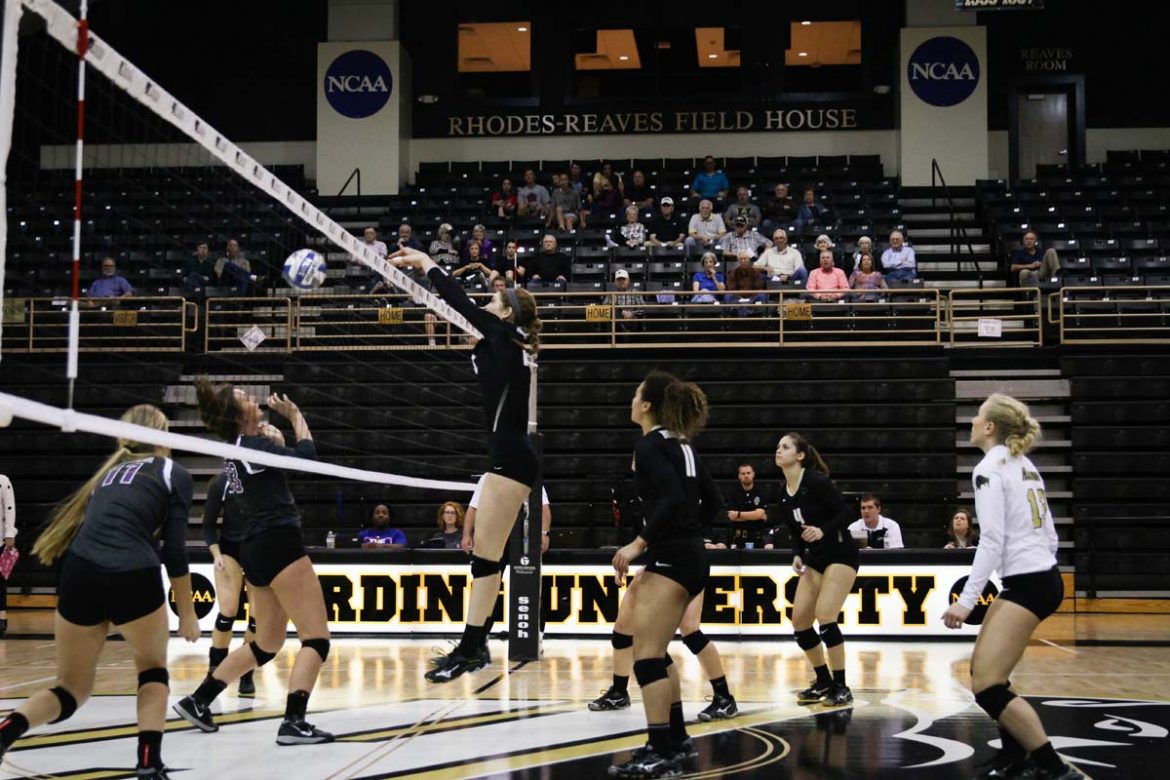 This win improved Harding’s win-loss record to 18-6 overall and 9-3 in the Great American Conference (GAC), securing a one-game lead over OBU and moving the Lady Bisons into a first-place tie with Oklahoma Baptist University (OKBU).The team hit .269 and had 50 kills, 60 digs and seven team blocks in the victory.

The team’s performance led to sophomore Emily Clayton being awarded GAC Offensive Player of the Week, marking her second recognition as a GAC player of the week. For the ninth week of the season, Clayton had 13 kills, securing a .455 attack percentage, her second-highest in the GAC this season.

Senior Abigail Glosup was highlighted as the GAC Setter of the Week, marking her second recognition as a GAC player of the week. Glosup had 39 assists, her second-highest three-set assist total this season and ranks second in the conference overall in assists per set with an average of 10.43.

Head coach Meredith Fear saw the team’s performance as representative of their strengths.

“It was just a really good, consistent and balanced game,” Fear said. “I think that’s the best thing we have going for our team: we’re really balanced both offensively and defensively. It’s not one hitter who goes off and no one can stop her and she has this amazing match. It’s when everyone is working together that we’re at our best, and we did that really well on Thursday.”

Harding’s victory against SAU maintained their first-place position in the GAC rankings and improved their win-loss record to 19-6 overall and 10-3 in the conference.

Fear described the team as being highly motivated after narrowly missing earning first place at the end of last year’s season.

“It’s a tight race for who’s going to come out on top,” Fear said. “It makes it more exciting and I think it’s going to make it more meaningful for whoever does come out on top. But it will be big for us. I think the girls are motivated for it and hungry for it and want to prove that Harding wasn’t setting a new precedent last year. We’re back and Harding is as strong as ever.”

Hardin sees the need for her team to remain focused throughout the rest of the season.

“As a team, we have to use [our win against OBU] as motivation to keep playing strong, while not getting caught up in the win and forgetting the work we still have left to do,” Hardin said.

The Lady Bisons played at home on Nov. 3 against Henderson State University, but results were not available at press time. Harding will play at Arkansas Tech University on Tuesday, Nov. 8, and on Senior Night, Nov. 10, against the University of Arkansas at Monticello, both scheduled for 6 p.m.

Harding has clinched a berth in the GAC Tournament, which will take place in Hot Springs, Arkansas from Nov. 17-19. If the GAC standings hold, the Lady Bisons will be the top seed at the tournament as OKBU is ineligible for postseason play.