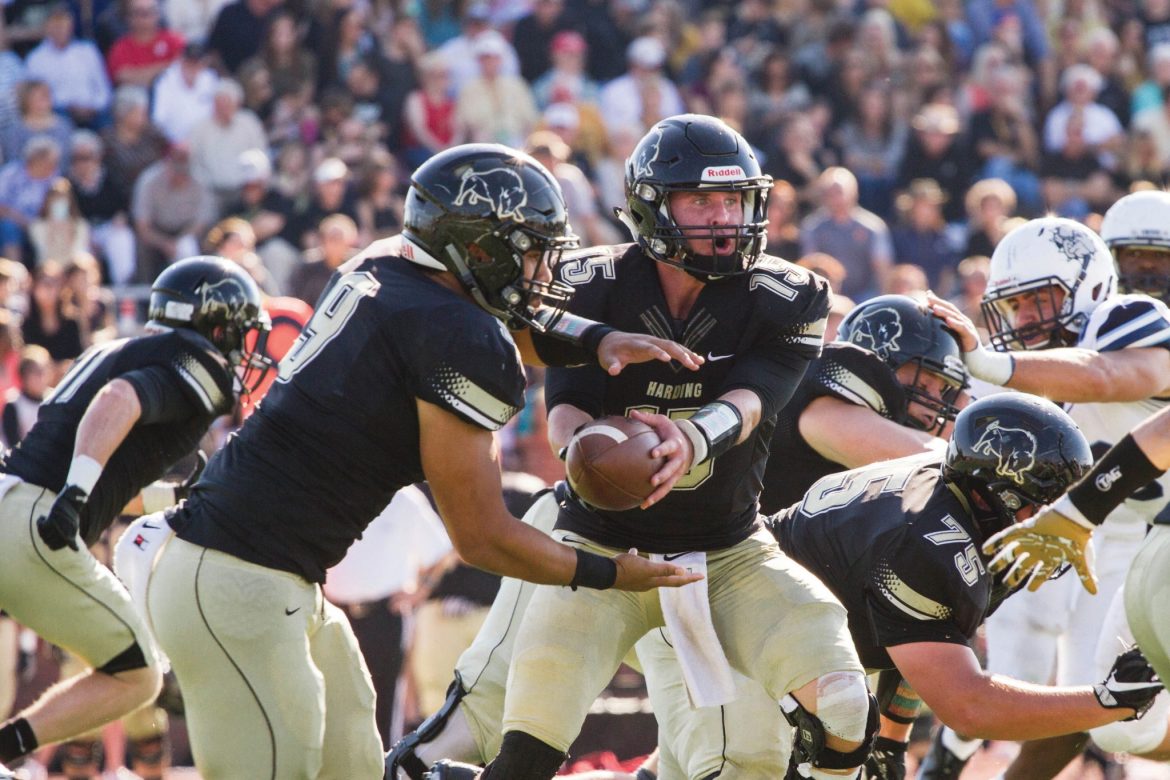 By Audra Shumaker and Caleb Rowan

On Saturday, Oct. 29, the First Security Stadium was packed with students, family and alumni for Harding’s Homecoming football game. The Bisons defeated Southwestern Oklahoma State (SWOSU) 42-27, moving to 9-0 this season and keeping their undefeated season intact.

Senior quarterback Park Parish scored the first touchdown of the game with a 3-yard run, giving the Bisons an early 7-0 lead after junior Tristan Parsley secured the extra point. The Bisons continued to move the ball on the ground and built a 28-13 lead by the end of the first half. SWOSU cut the lead to 35-27 midway through the fourth quarter, but Parish responded with another touchdown run, this time from 23 yards out. According to Parish, the team took care of the ball and played well, not losing a turnover battle.

“This team has a special bond and is driven to do something great this season,” Parish said. “Our team has had to overcome some adversity. Each week we have to get out there and prove ourselves.”

The Bisons’ defense gave up its highest point total of the season in the win over SWOSU, but the unit is still the third best defense in NCAA Division II football, giving up just 244 yards per game.

According to senior linebacker Daylan Skidmore, defeating both Henderson State University and Ouachita Baptist University this year was a huge accomplishment for the team because it has not been done in the past five years.

“The team is excited about their record and has every intention of victory,” Skidmore said. “Every week is an accomplishment, and we are grateful for having done this well so far — grateful, but not satisfied.”

Saturday’s game was particularly special to head coach Ronnie Huckeba because it was the 40-year reunion of his senior year team that won Harding’s first conference championship in 1976. The Bison alumni spent time talking with the team, expressing their excitement of this season. According to Huckeba, many alumni players come back for Homecoming weekend, and the team wanted to make the former Bisons proud.

“When our players interact in that venue of legacy it makes them even more determined to do well,” Huckeba said. “We chose to take it one week at a time and prepare each week with what we need for each game.”

According to Huckeba, the overall culture of this team is love and family and this team lives that out on and off the field. In his final season as head coach, Huckeba’s Bisons are now just two wins from an undefeated regular season, which would all but assure the them a home playoff game for the first time in school history.

On Saturday, Nov. 5, the 9-0 Bisons will travel to Alva, Oklahoma to play Northwestern Oklahoma State University. With a win, the Bisons will clinch the GAC regular season title, which would mark the first outright conference championship in program history.