Traveling with retirees and purposeful RVs 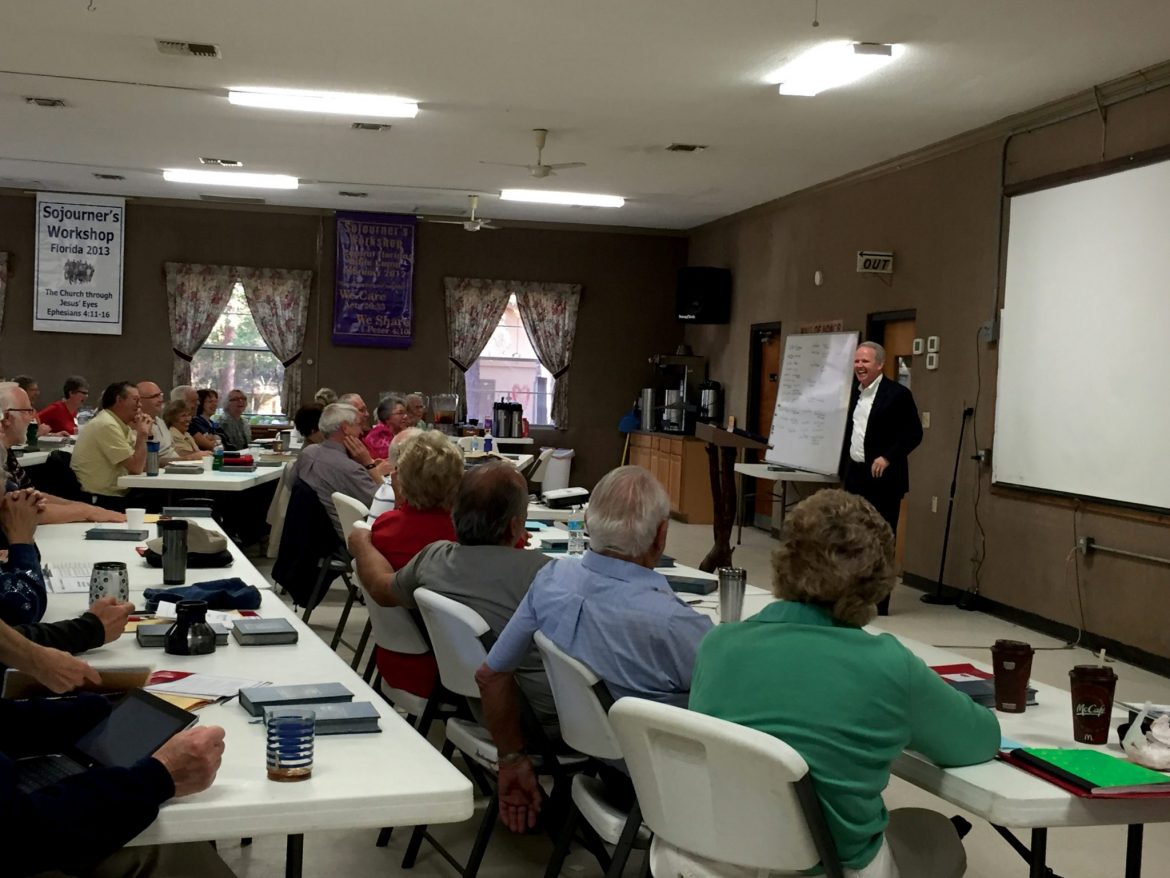 In 1978, the National Evangelism with Sojourners of the Church of Christ began with a two-couple meeting of Paul and Peggie Scott and Marvin and Linda Hall. Today, the Sojourners is a Church of Christ based RV ministry consisting of approximately 1,100 mostly retired Christians.

The Sojourners was sparked by the desire of the Scotts to strengthen small and struggling churches. They spent years performing domestic mission work before helping create the Sojourners.

The ministry is sponsored by the Burleson Church of Christ in Burleson, Texas, and based at Camp Bee in Marshall, Texas. The Sojourners host five workshops every year in different regions in the U.S.

“We have a fantastic time putting together teams of people who love the Lord, and they are excited about their retirement years,” Rick Northen, a Sojourner co-leader, said. “What we do beats the heck out of sitting in a rocking chair.”

Northen has been involved with the Sojourners for approximately six years. He described the ministry as “travel with a purpose.”

“There are a lot of us who feel that even in our home congregations, as we get older, we have less and less of a role, and we are willing to keep working,” Northen said. “(Sojourning) definitely gives us a purpose … We don’t just get in our RVs and see this beautiful land around us… we have this purpose that is bigger than ourselves.”

Dale Duncan, a Sojourners co-leader, and his wife Ann joined the Sojourners in 1999 after visiting their booth during an event in Oklahoma.

“The reason that (Sojourners) brings us all together is that we are a group of people that want to go out and teach about the word and save those souls that haven’t had the opportunity, and that is what we do,” Dale Duncan said. “It’s really been rewarding to meet people from different areas.”

Every year, the Sojourners receive approximately 125 requests for aid from across the U.S., and sojourns lasts approximately two weeks. The majority of requests come from small congregations, youth camps and children’s homes.

“There are so many people here in the U.S. that need our help,” Duncan said. “We are very important to these people.”

Steve Johnson and his wife Janet joined the Sojourners approximately one year ago. They sold their property and purchased an RV, where they live full-time. According to Johnson, sojourning was the main reason for purchasing and living in an RV.

“Sojourners is the perfect fit for that because you get to travel and you can serve,” Johnson said. “You get the fellowship of being with other Christians.”

Johnson retired from the air force and said he enjoys the lack of competitiveness within the Sojourners group compared to his career.

“You spend so many of your years working as an adult, and there’s a lot of pressure involved in achieving or making rank,” Johnson said. “(The people in the Sojourners) have already had their careers. They are not competing, they are not trying to make rank, they are not trying to outdo anybody they are just trying to serve God, and just being around them is very encouraging as far as that goes because it’s just like-minded people that want to have fun and serve God and help others.”

“I love that my grandparents have found such a cool way to spend their time in retirement,” Rebecca Johnson said. “It is like church camp for the over 70 club, and I am really impressed with their willingness and desire to serve throughout their life.”

According to Rebecca Johnson, the Sojourners provides an outlet for her grandparents to exercise their desire to serve. According to Northen, the ministry is filled with people who have similar passions for outreach.

“You don’t exactly have to cross an ocean to be a missionary,” Northen said. “We love what we do, we have a lot of fun when we are doing it.”