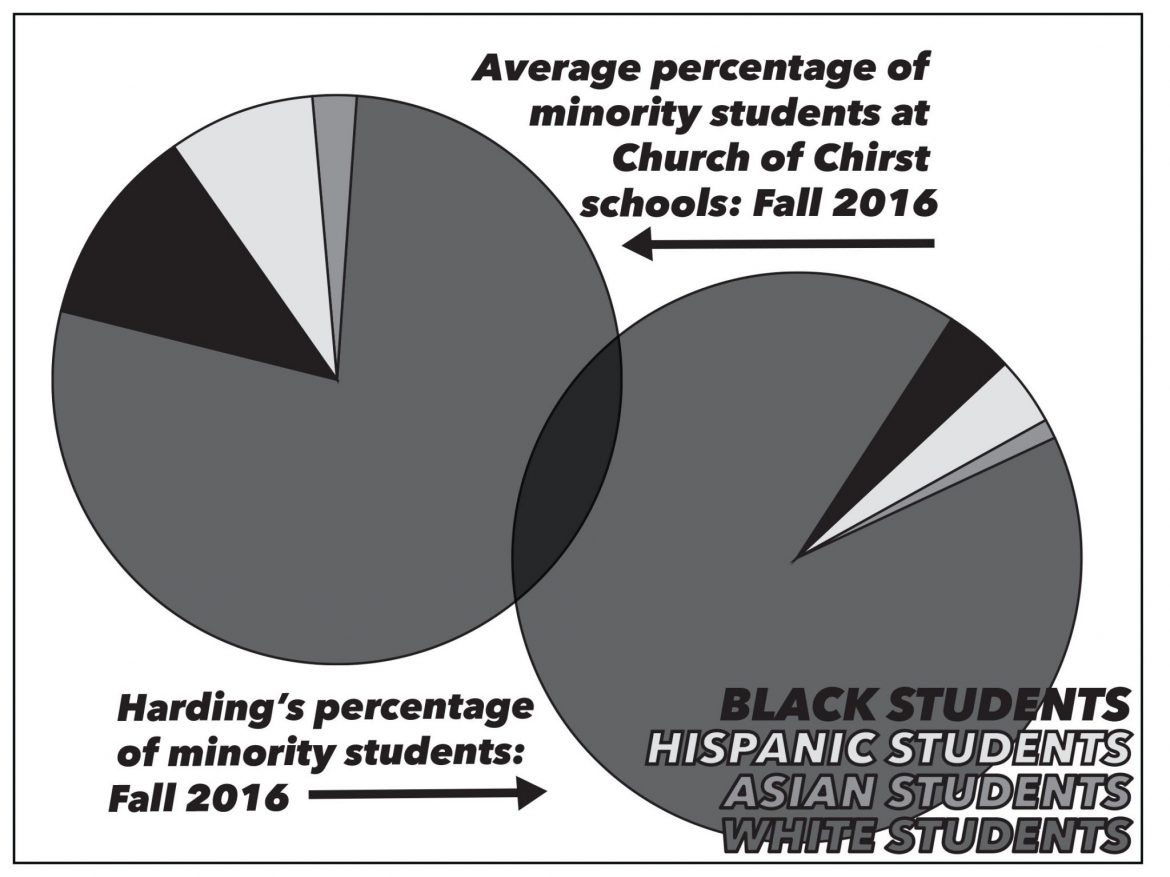 President Bruce McLarty is required to submit a strategic plan to the Higher Learning Commission (HLC) in January 2017 on how to increase campus diversity, according to a 2015 HLC letter.

“Each institution is able to define its mission and its goals in terms of diversity,” Spears said. “(But the HLC) has encouraged us to seek to be more diverse, which is already in our mission statement. It’s something we talk about a lot and something we try to accomplish.”

Harding’s percentages fell below those schools’ averages. The percentage of black undergraduate students at Harding was 4 percent; for Latin American students, 4 percent; and for Asian students, 1 percent.

Senior Josh Nickerson, vice president of the Black Student Association (BSA), said he believes Harding should increase its efforts to make the student body more racially diverse. He said minority students have to face certain obstacles on campus due to Harding’s current numbers.

“I feel like sometimes we are constantly defending our culture and what we’ve been through for years as a collective group,” Nickerson said. “Sometimes it’s hard for minority students to explain their story to others without fear of being attacked or ridiculed …the Harding bubble does not guard minority students against the racial injustice and discrimination we see and face every day. Minority issues and problems do not simply disappear when we come to Harding.”

While Harding falls below the Church of Christ school average for percentages of minority undergraduate students, it rises above the average completion rates.

Lee Edwards, assistant professor in the department of Bible and ministry, began his doctorate in heritage studies in August. He is currently researching various diversity trends for possible dissertation topics. He said he believes even though Harding’s graduation numbers are above the Church of Christ average, Harding could still be doing more.

“I am sure there are many ways to view our numbers as being typical or average,” Edwards said. “But my concern is that when we do that, we are making excuses. I don’t want to look back on this moment in 25 years and have to admit that we were guilty of sugarcoating… If the goal is increased diversity, we must find creative ways to attract diverse students and faculty.”

According to Spears, only 5 percent of the full-time faculty at Harding are minorities. Of that five percent, 2.1 percent are two or more ethnicities, 1.2 are black and the other 1.7 are distributed among other ethnic categories.

Nickerson said the lack of diversity within the faculty is a problem that needs to be addressed more.

“I think more students need to experience being taught in an academic setting by someone who looks like them,” Nickerson said. “Sometimes I want to experience a class that’s taught by a professor who shares some of the same stories and experiences as me. We should give minority students here that luxury.”

Traveling with retirees and purposeful RVs