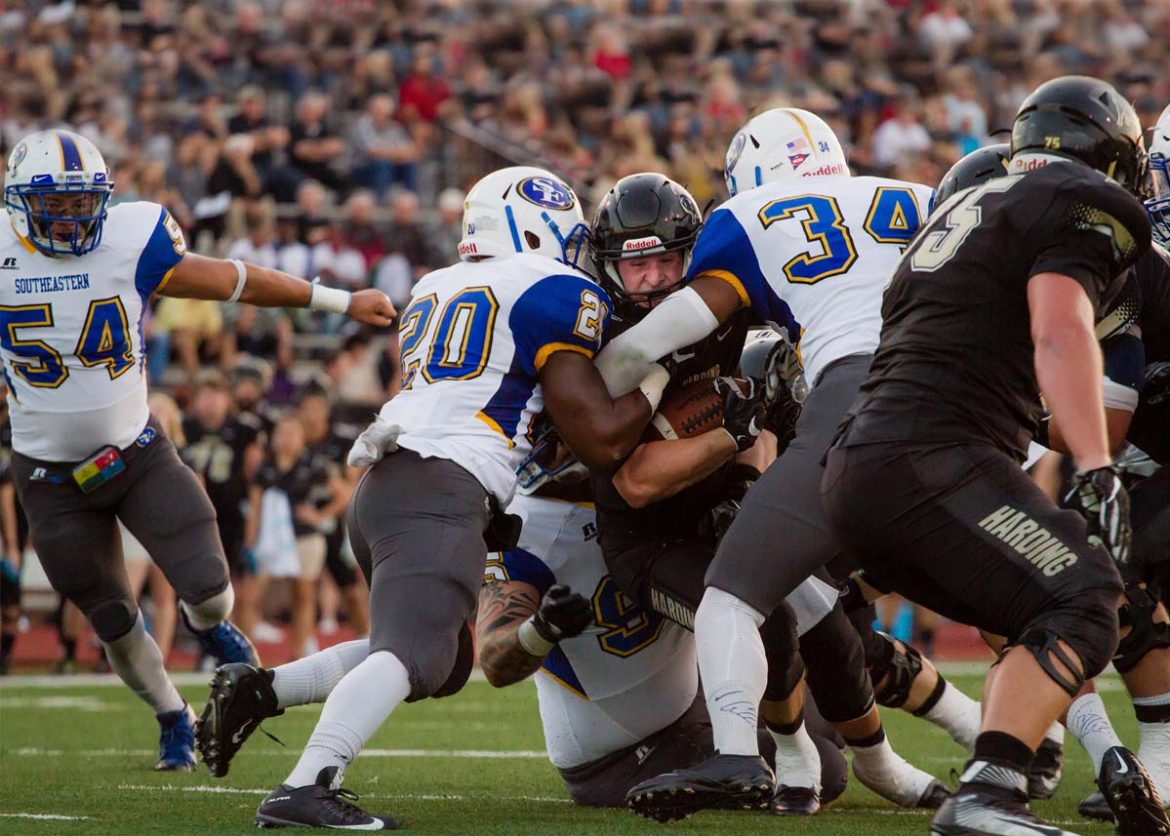 Off to a program best 8-0 start, the Harding Bisons take on the Southwestern Oklahoma State University (SWOSU) Bulldogs tomorrow at First Security Stadium for their Homecoming matchup. Since they hold the tiebreaker over every team in the conference, they now control their own destiny to their first Great American Conference (GAC) championship. Ranked fifth nationally, the Bisons are in position to host their first ever playoff game.

“It would really mean a lot to the school to go undefeated and host a playoff game,” said Dr. Clifton Ganus Sr., chancellor emeritus and long-time Harding football fan. “The publicity you get from winning football games is amazing. Winning is important. It isn’t everything, but it is important.”

“We have had good beginnings in the past,” Ganus said. “We have won as many as four, five and six in a row to start a season. But then we start to stub our own toes. We start to fumble the ball and commit too many penalties. But this year, if you look at the record, we are the best team in NCAA Division II in turnovers, because we aren’t fumbling the ball like we did last year. We are doing a much better job at holding onto the ball and making fewer mistakes.”

The Bisons are 6-5 all time against SWOSU dating back to 1994 when the Bisons defeated the Bulldogs 39-27. SWOSU is coming to Searcy riding on a four-game winning streak after starting the season 0-4.

A year ago, the Bisons played the Bulldogs in Weatherford, Oklahoma, and lost 21-13. Harding fumbled the ball three times, one of which SWOSU recovered and converted to a touchdown. Harding also had six penalties that resulted in 63 total yards lost. SWOSU outrushed Harding with 190 yards on the ground. This was the first time Harding has been outrushed in over four years.

“Last year we went up there and they just pushed us around. Even when we knew they were going to run the ball, we weren’t able to stop them,” senior linebacker Benjamin Shields said. “We know that we have a better defensive line, and we feel like we have something to prove on Saturday. So we’re going to come out and really try to shut down their run game early.”

If Harding wins tomorrow, they will be 9-0 with two games remaining. A win on Nov. 5, at Northwestern Oklahoma State University (NWOSU) would clinch the Bisons’ first GAC title.

“This is the best season I have ever been a part of in my entire playing career,” Shields said. “We’re just clicking on all sides of the ball right now. We’re just really coming together, exactly how we want to.”

Ganus has had multiple conversations with head coach Ronnie Huckeba over the success of his last season.

“Maybe the real reason we are doing so well is because I told coach Huckeba that I’m getting up there in years, and I sure would love to see an undefeated season,” Ganus said. “So here we are. Maybe he took the word.”

“It’s always a very exciting time to see everybody come back,” Ganus said. “I came to Harding in 1939. That was 77 years ago. And back then, we didn’t have Homecoming like we do now. Harding was so different then. It was so small … To me, it’s a wonderful, exciting time because I knew so many of those students who were away, and I always enjoy having them back and getting to visit with them.”

With extra eyes on this game and a head coach in his last season, Shields said that the team is a little more motivated for this year’s Homecoming game.

The game is scheduled for 2 p.m. on Saturday, Oct. 29 at First Security Stadium. Tailgating will take place before the game, and the crowning of the Homecoming queen will take place at halftime.