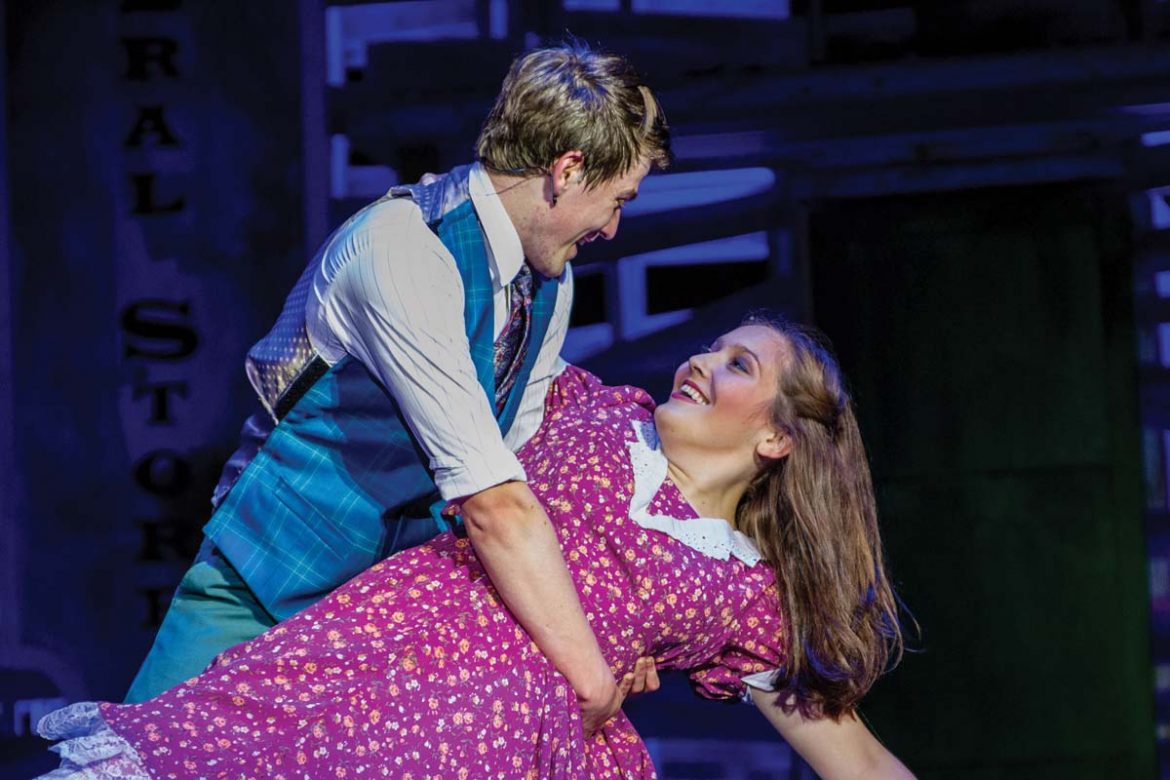 In the small town of Deadrock, Nevada, a naïve aspiring performer from New York City named Bobby meets and falls head over heels for Polly, a headstrong country girl with a big heart. The two find themselves on a difficult journey to love, all the while singing Gershwin tunes in this year’s Homecoming musical, “Crazy for You.”

Senior Thomas Williams will be playing Bobby Child opposite senior Renee Maynard as Polly Baker. According to both performers, they cannot wait to bring this fun and dynamic show to the Benson stage.

When “Crazy for You” was first announced last year as the 2016 Homecoming musical, Williams said he was initially surprised due to the great amount of dance in the show.

“I’ve always felt like we’ve done better with character-type shows,” Williams said. “But I feel like we’ve risen to the occasion, absolutely, and this is a big step for Harding.”

Williams and Maynard auditioned last semester for the lead roles and worked throughout the summer to fine-tune their skills in preparation for rehearsals this fall. Since the character of Bobby is a tap dancer, Williams said he took lessons over the summer to improve his tap abilities.

“Learning to tap was something that I’ve always wanted to do, but I’ve never been able to justify it,” Williams said. “But with this show it was like, ‘No, you are going to learn to tap.'”

Maynard said she is excited about the dancing as well as the recognizable songs in the show.

“I’d seen some clips of the show, and I knew Polly was a big dance role, and she gets to sing ‘Someone to Watch over Me,'” Maynard said. “That’s been a dream come true to perform, because it’s such a great song.”

According to Williams, this is his 13th show with Harding theatre. Maynard and Williams have both been Spring Sing hosts in past years, but this is their first time as leads in a Homecoming musical.

“I’ve been in chorus with Thomas for four years, and he’s just the most energetic person I know,” Maynard said. “He’s so much fun to dance with and act with, and I can tell how much I’ve grown as an actor just by getting to be in scenes with him.”

As for her character, Maynard said she and Polly differ in how they deal with situations, but overall they are alike.

“We’re both romantics, but we’re not going to settle for anybody,” Maynard said.

According to Williams, he and his character Bobby are very similar.

“To me, Bobby is a lovable doofus; like he’s not cool. He’s not cool at all,” Williams said. “But you like him because he’s so earnest, and he’s having a good time. And I feel like that’s kind of me. I’m not cool in the traditional sense, but I have a good time and I try to make people happy.”

With a cast of over 40, a large number of freshmen, and more dance numbers than any musical in Harding history, Williams said he was extremely pleased with how well the show has come together in the last two months.

“This is the smoothest and most unified I’ve ever seen a cast in a musical,” Williams said. “This year, everyone who’s in the show, I feel like we’re all friends. It’s very special to be a part of a cast like that.”

According to Robin Miller, chair of the department of theatre and director of “Crazy for You,” Williams and Maynard are two very skilled performers who will do a great job of leading the show on Homecoming weekend.

“They know their way around a stage; they have great voices, but the ‘it’ factor was that both of them had an energy and a persona that beautifully matched the two characters,” Miller said. “They have a personal quality that they can tap into to really bring these two characters to life, and it was very clear that they going to be able to do this successfully.”