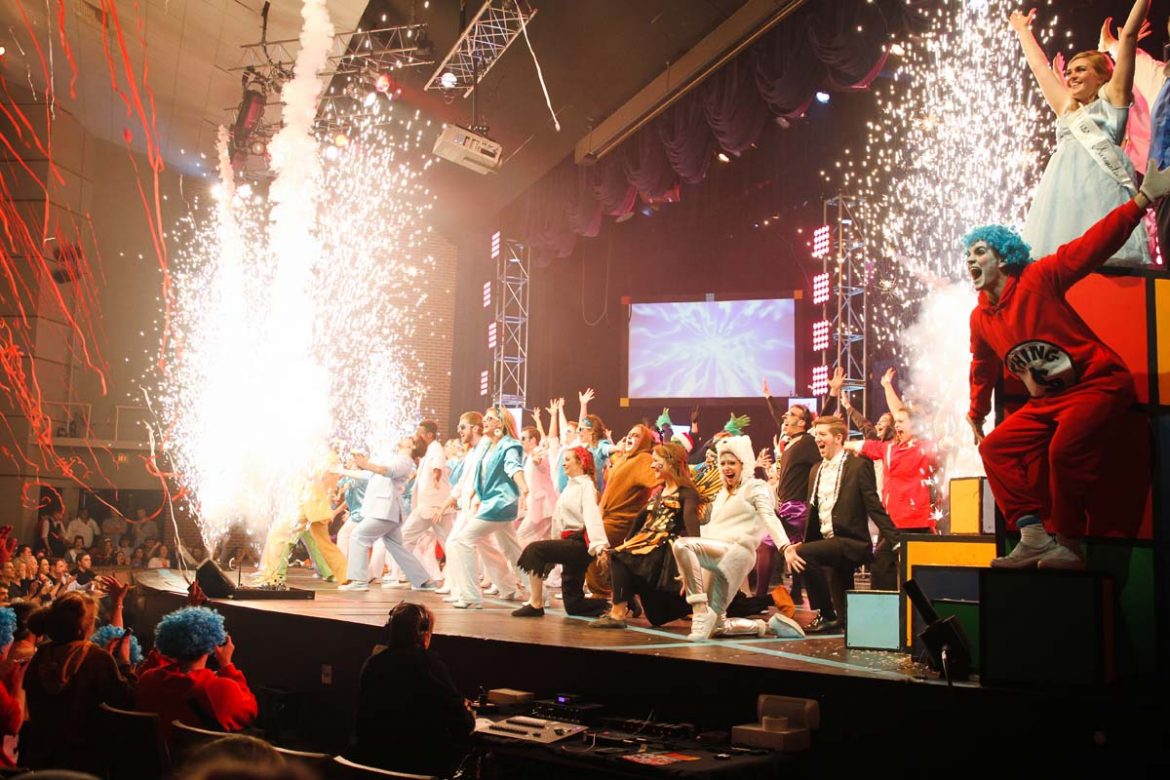 This year’s show featured a DeLorean representing the time machine from the “Back to the Future” series.

“With the 30th anniversary of “Back to the Future” just celebrated, using a time machine would take us back to the ‘70s and ‘80s,” Frye said. “It was a perfect fit.”

The replica vehicle was created by Oliver and Terry Holler, who are licensed with Fox Studios. The car is featured in trade shows and conventions all over the U.S. every year. It is fully functional and is driven to each event. Frye contacted the Hollers last October to book the car for the show. After each show, audiences were given the opportunity to take pictures with the car for a small fee. A total of $500 was made from the photo shoots, with proceeds made from the photos going to the Michael J. Fox Foundation for Parkinson’s Research. According to Frye, Fox Studios has licensed around five companies to make replicas of the vehicle. There were four cars built for the “Back to the Future” movies, yet only one remains with Fox Studios as the others have been destroyed. Having the car onstage for the performance required a flat-stage design, but Frye said that the production will return to a multi-layer stage next year.

Ensemble was also unique this year. The usual number in ensemble is 20 dancers with 10 vocalists, but this year it was cut down to 16 and eight. Frye thought a smaller number of bodies on stage was a good thing.

“I don’t think we need to put lots of bodies on stage,” Frye said. “We need the right balance and the right amount of vocalists to support the product.”

Freshman Justice Laws was one of only two freshmen in ensemble, but he stood out as he was also a large part in the winning show “Ice, Ice Baby.”
Laws said tryouts for Ensemble were nerve-wracking.

“There were a lot of people (at auditions), but I was dedicated to make it as it’s not a common thing for freshman,” Laws said. “I was nervous, I even messed up little bit.”

Laws said he had to make a schedule for each day of practice. Some nights consisted of going to both large part and ensemble practices. He dedicated his weekends to studying and focused on staying healthy.

“Ensemble is very demanding…you have to keep up with your health because you cannot be replaced,” Laws said.

Laws said he aided the choreographers in coming up with certain dance moves, and he choreographed the entirety of his solo, “Werewolves of London.” He said he hopes to be a host next year and also be a director for TNT and Zeta Rho’s show. One of his large part directors, sophomore Lawson Pitts, said he believes he can achieve his goal.

“If anybody’s got a shot (at host), it’s going to be someone as talented as Justice,” Pitts said. “He was one of the most talented people in ensemble and large part this year,” Pitts said.

Junior Mitchell Brooks was not a member of ensemble, but he created the graphic visuals for “Delta Nu Moon.” He said one of the directors approached him early on about the opportunity and his “say yes” mentality drove him to take on the challenge.

“I was once told by Harding grad Dylan Treadwell to say yes to everything and figure out how you’re going to work it out later,” Brooks said.

It was Brooks’ first time to create something for a Spring Sing show, and he said the deadline came up quicker than he expected.

“It was a Friday, and I thought the project was due in two weeks, but then realized that it was due that following Tuesday,” Brooks said. “I had only completed 50 seconds of the seven-minute show.”

Brooks said that the weekend consisted of nothing but graphic visuals, Slader’s dumplings, and video games for breaks. He started at 10 a.m. each day and worked for hours. He said he remembers Saturday being the longest day.

Brooks said he plans on creating children’s books with his friend in Knights. The books will cover the parables from the Bible. He is also doing daily drawings for a year and posting them on his Instagram, @mitchelldbrooks.

According to Frye, Spring Sing 2016 was the earliest it has ever been. Frye admitted the early date caused some issues.

“It put a hard crunch on everyone to get things ready and get things done,” Frye said. “It was rushed. If I had it my way, it’d be the first weekend of April every year.”

Due to regional schools being on spring break, there was no children’s matinee. Frye said that has happened once or twice before. Although it was earlier than usual, Frye said the crowd numbers were the same they have always been.

There has not been a theme set for next year’s show.

“Because of events going on in my life, I couldn’t get the theme, music, and visuals in my head like I usually do,” Frye said. “When I do make a decision, I’ll let PR (public relations) know so they can post it.”