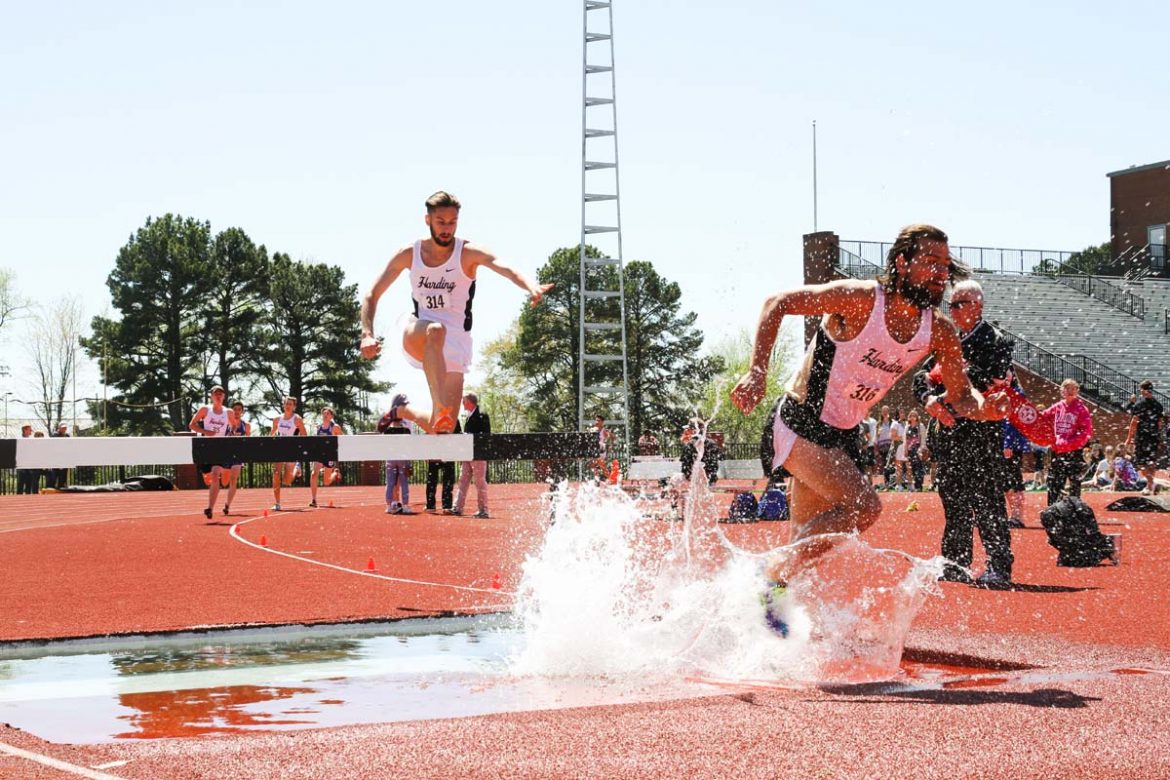 The men’s and women’s track team scored a combined 244 points, taking home the trophy against rival Southern Arkansas University (SAU) on April 2 at the Harding Invitational.

“We hosted the Invitational and probably had six schools here, but our scores were against SAU,” head coach Steve Guymon said. “Overall, we had a very good meet, even though we had some injuries (prior to the meet). I was a little nervous about it, but our kids did very well … they are tough and we did very well on Saturday.”

The men’s team took home multiple victories with junior Josh Syrotchen throwing a discus 198 feet, eight inches, the longest throw in NCAA Division II this season and the second longest at any level in the NCAA. This throw also automatically qualifies Syrotchen for the NCAA outdoor meet in the discus, according to hardingsports.com. Along with Syrotchen’s win in the discus throw, he also won the javelin and hammer throw, breaking a previously held school record.

“My season PR (personal record) last year was 181 feet, 10 inches, so I got stuck with that for a while,” Syrotchen said. “We have a new weight program this season and I’ve been a lot more dedicated. My goal coming in (to the discus) was 188 or 189 feet. Right before my fifth throw, coach [Steve Guymon] fired me up and I just gave it my all to throw the 198 feet, eight inches.”

According to Megan Kessler, the team’s graduate assistant, Syrotchen is currently in a position to qualify for the Olympic trials.

“He (Syrotchen) is four-and-a-half feet away from hitting the automatic (distance) for trials,” Kessler said. “He’s ranked 20th in the country overall and they take the top 24, so as long as we can hold off, we can go.”

“At first, I was thinking that I was going to fast, but I wasn’t very tired, so I kept going at the same pace and finished the race,” Leonard said.

According to hardingsports.com, Harding won three running events, the steeplechase, the 4×400-meter relay and five field events. Along with Syrotchen’s victories on Saturday, the men scored evenly throughout the entire meet. Senior Tyler Cardillo won the 800-meter race, as well the 4×400-meter relay.

“We’ve got to get some people healthy and need to stay focused,” Guymon said. “I’ve been blessed with a tremendous group of young people that work together and coach each other.”

The teams will head to Little Rock on April 9 to compete at the University of Arkansas at Little Rock (UALR) Open.