Home Features Looking back on the 2015-2016 Student Association 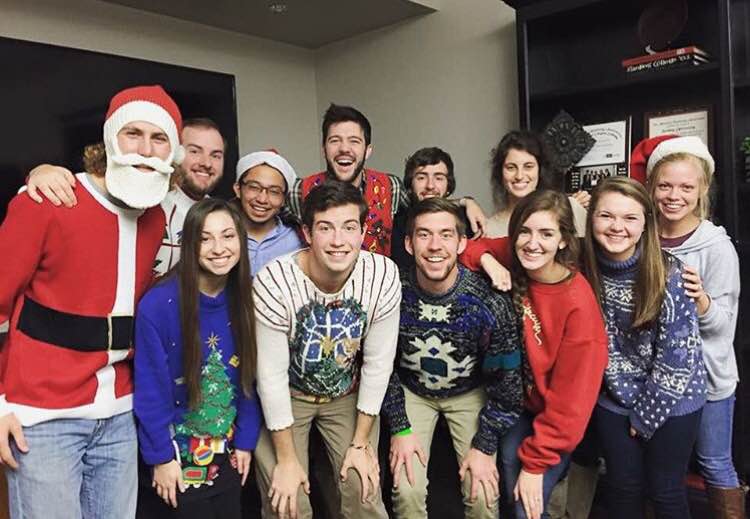 It is election season on campus, and the members of the 2015-2016 Student Association (SA) are preparing to pass the leadership to the next group of students. Senior SA President Kyle Johnson said the organization has many committees that work hard to complete various tasks. Most notably, the spiritual life committee hosted three events – Post-It and Pray, Developing Love for a Developing World, and a night of worship with the Zoe Group – that helped create unity and awareness on campus. Johnson said he felt the SA’s theme of “Story” connected with multiple events that took place on campus throughout the year. Senior Brent Hall, SA secretary, said the SA as a whole has focused on being a more vocal presence on campus. Hall said the SA utilized their social media to make students aware of the events happening on campus and to serve as a voice for organizations. Johnson played a large role in helping that become a reality. “Kyle has done a fantastic job of getting himself out of the spot light and highlighting other people,” Hall said. “I think that’s when the SA is most powerful – when all 14 positions feel empowered and feel like they can make a change on campus.” Johnson said that to help increase awareness of the SA, he felt it was important for the student body to know who was working for them. So, every Monday of the fall semester, Johnson introduced each member in chapel. “I personally liked introducing them, kind of making fun of them, but also sharing legitimately good insights about them and letting the students get to know them a little better,” Johnson said. Hall, who is head of the chapel committee, said the chapel committee’s major focus was to find ways to make chapel relate to students by encouraging transparency and honesty from the speakers. “We tried to bring more humanity back into chapel because it seemed to be kind of removed and separated,” Hall said. “I hope that we were able to bring more honesty with the way we planned some of the chapel periods. Chapel needs to be a place where people can see other people whose lives have been changed by the goodness of God.” Johnson said he felt the SA’s theme of “Story” connected with multiple events that took place on campus throughout the year. He said that while the events the organization took on were executed well, not every idea turned into an Both Johnson and Hall said President Bruce McLarty’s kind and patient personality helped the SA to make decisions that would benefit both the students and the faculty. “(McLarty) is one of the wisest men I’ve ever encountered,” Hall said. “His ability to analyze a situation look at it from a nonbiased perspective and also a bias perspective is so important. Everything reflects on him and on the university. He has done such a great job of listening to our ideas and giving us feedback. Having him as a mentor a partner and a friend has been pretty special.” Hall said he hopes next year’s SA will continue to be intentional about being present on campus and focus on making the organization a group of students who are working toward the good of the campus. “(The SA is) constantly a voice and a face for the university as a whole,” Hall said. “You can help set the tone for the student body – which is a neat experience, but also a huge responsibility. You are a spokesman for Harding, and you get the chance to speak on the behalf of students as well as faculty. Embrace that role and be prepared.”