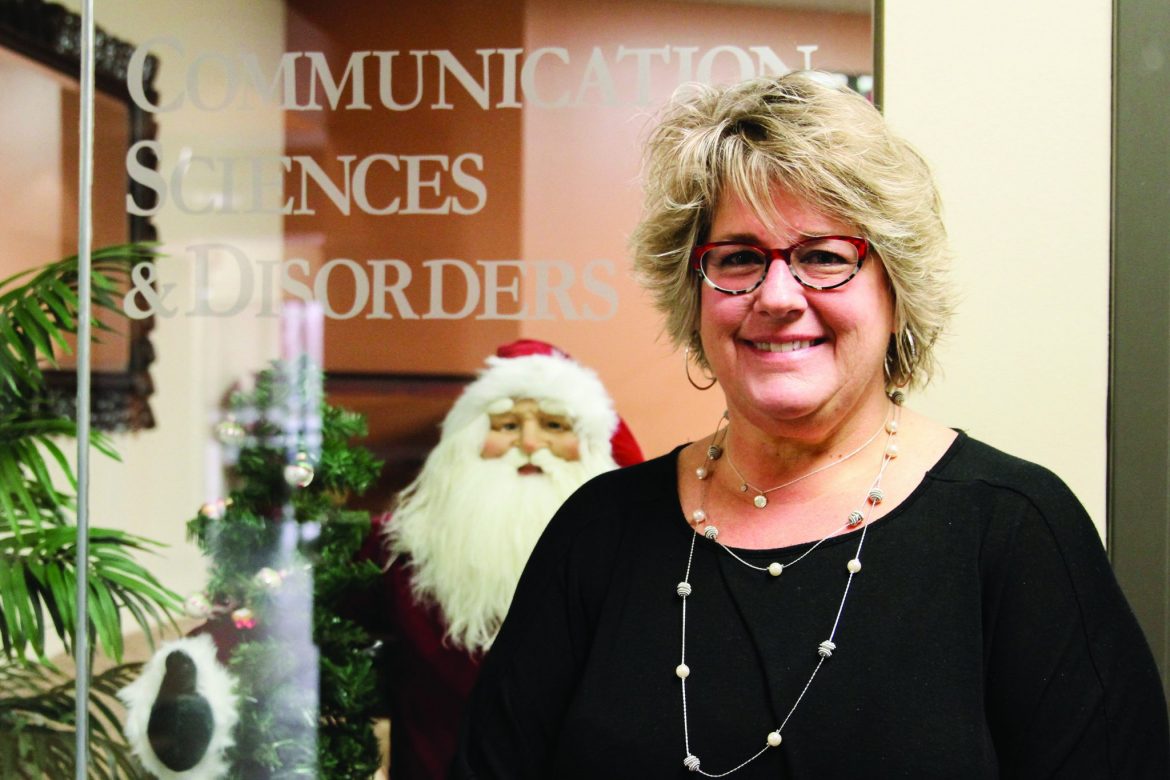 She stood in a white gown behind doors which would open to an aisle leading to her groom. Her father was beside her, and, in American Sign Language (ASL), he communicated his last-minute thoughts.

“You know, I’m surprised you married a hearing person,” he signed. “I thought you would marry someone like you — deaf.”

She looked at her father, puzzled. “I’m not deaf,” she signed. “I’m hearing.”

“I know, but inside you’re deaf,” her father signed.

Debbie Woodroof, who will teach American Sign Language in the spring, was raised in a household that spoke ASL. Though she and her siblings have the ability to hear, both of her parents were born deaf.

“I’m more deaf inside than I am hearing,” Woodroof said. “When I think, I think in sign language and when I can’t spell something I finger spell it in my mind. I didn’t realize it until I started teaching sign language really, but it’s my first language. It’s what I dream in; when I dream, I don’t dream of people talking, I dream of people signing. I didn’t realize that it was different because its normal for me.”

Woodroof said she and her siblings still prefer to communicate with each other in ASL rather than verbally because it comes more naturally.

“My parents were really aware that we could hear and tried to make sure we had exposure to that, but at the same time we didn’t talk at the dinner table … that wasn’t our language, everyone didn’t speak,” Woodroof said. “We never spoke when our parents were present.”

Woodroof began interpreting while she attended Ohlone Community College in California and has been a certified ASL interpreter for 40 years. She taught ASL I and ASL II for 13 years at Harding before she and her husband moved to Italy to teach English using the Bible with Avanti Italia through College Church of Christ. The couple moved back to Searcy about three months ago.

“Regardless of what your major is, (or) what you’re planning to do, you’re going to encounter, at some point, a person from the Deaf Community,” Dr. Dan Tullos, professor and chair for the Communication Sciences and Disorders Department, said. “If you’re able to interact with them in some way, shape or form, then you have provided a service.”

According to the World Federation of the Deaf, approximately 70 million deaf people use ASL as a first language. Woodroof said her most prominent experiences of interpreting come from medical and court.

“For me, being an interpreter in the community for so many years, I see how valuable it is to communicate,” Woodroof said. “When you don’t have full communication access, it’s a very scary place to be.”

The ASL I elective was added into the catalog for spring 2016 before the end of October. Three sections of ASL I are available for next semester. Tullos said the Communications Sciences and Disorders Department plans to offer ASL II and III in following semesters and to establish an interpreting training program for any major.

“We are a mission-based university,” Tullos said. “We are looking for ways to go out and fulfill a need in communities and interpreters are always desperately needed.”

Woodroof said she will teach the course using only ASL. ASL is not the same as signing English, but equivalent to learning a foreign language, in which sentences are structured differently than when spoken, according to Woodroof.

“Most, if not all, deaf people don’t see themselves as broken or needing fixing,” Woodroof said. “Deaf people feel sorry for hearing people, that you can’t participate in their world; it’s all a matter of perspective.”