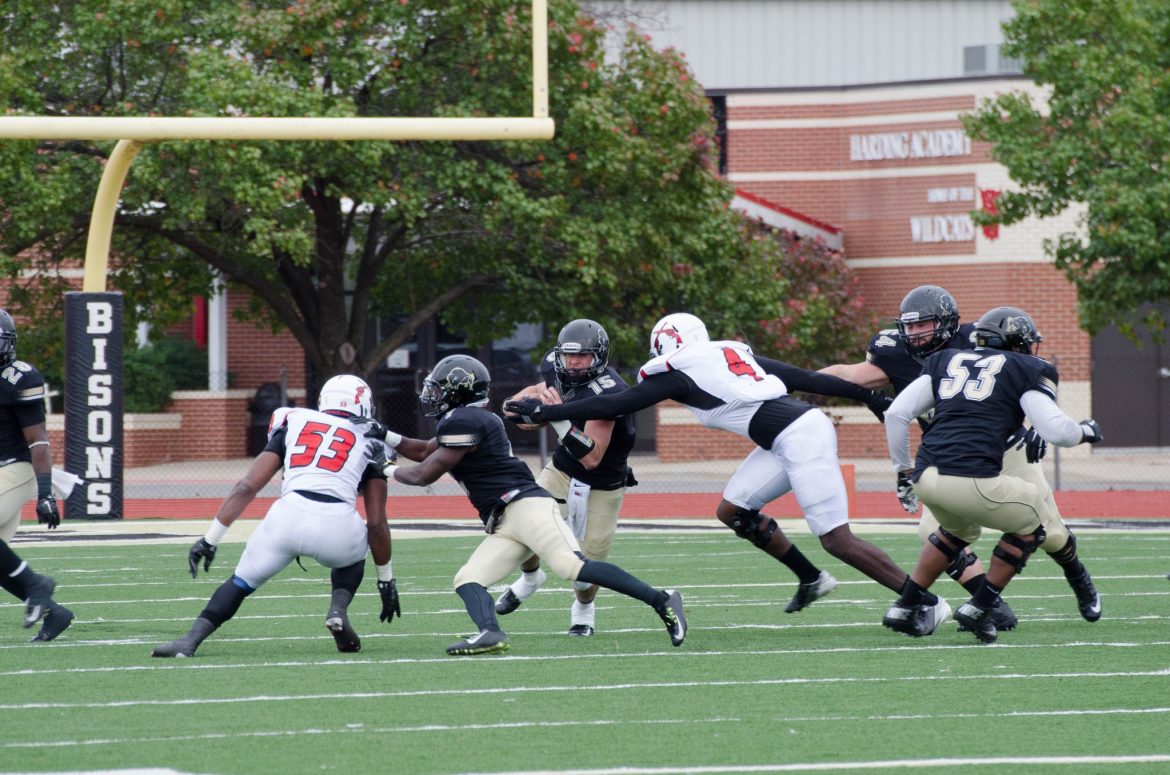 After a slow first half, the Bisons used 21 unanswered points in the fourth quarter to defeat the Rangers of Northwestern Oklahoma State University (NWOSU) 42-30 on Nov. 7.

“That game had so many ups and downs,” head coach Ronnie Huckeba said to Harding radio announcer Billy Morgan in his postgame analysis. “We had a punt blocked, a snap over the punter’s head for a safety, turnovers, missed opportunities on offense, but fortunately, we were able to recover and our guys, man – did they ever play great in the second half.”

The Bisons second-half charge was led by junior fullback Michael Latu, who carried the ball 15 times for 167 yards and three touchdowns in the win. Latu said that the offense as whole helped him out all day.

“The reason I played the way I did was because of the offensive line and being able to follow behind everyone else’s blocks for me,” Latu said. “All the credit goes to them.”

Trailing 30-21 with just over nine minutes remaining in the fourth quarter, the Bisons were given new life when junior linebacker Daylan Skidmore batted a NWOSU pass into the air and came down with the interception. From there, three runs from junior quarterback Park Parish set up the Bisons inside the 10-yard line, where Latu punched it in from nine yards out to cut the NWOSU lead to 30-28.

On the Rangers’ next possession, junior defensive end and Great American Conference defensive player of the week, Trevon Biglow, sacked and stripped the NWOSU quarterback, leading to a Bisons’ recovery at the NWOSU 5-yard line by sophomore T.J. Winslow. Set up with first-and-goal, Latu punched in his second score in two minutes to push the Bisons to a 35-30 lead. After forcing a NWOSU punt on the next drive, it was Latu again, who broke a 92-yard run to set himself up for his third touchdown of the quarter from two yards out, and seal the 42-30 win for the Bisons.

The Bisons now prepare for their final regular season game on Saturday, Nov. 14, against rival Arkansas Tech University (ATU). Latu said the team is focusing on finishing strong and sending the senior class out in style.

“Going into this last game against Tech (ATU) there’s so much excitement coming from our team,” Latu said. “We know we have to leave it all on the field one last time to beat a really good football team. We just want to make sure we send our seniors off the right way.”

The Bisons kick off the final game of 2015 tomorrow against ATU at 2 p.m. in Russellville, Arkansas.