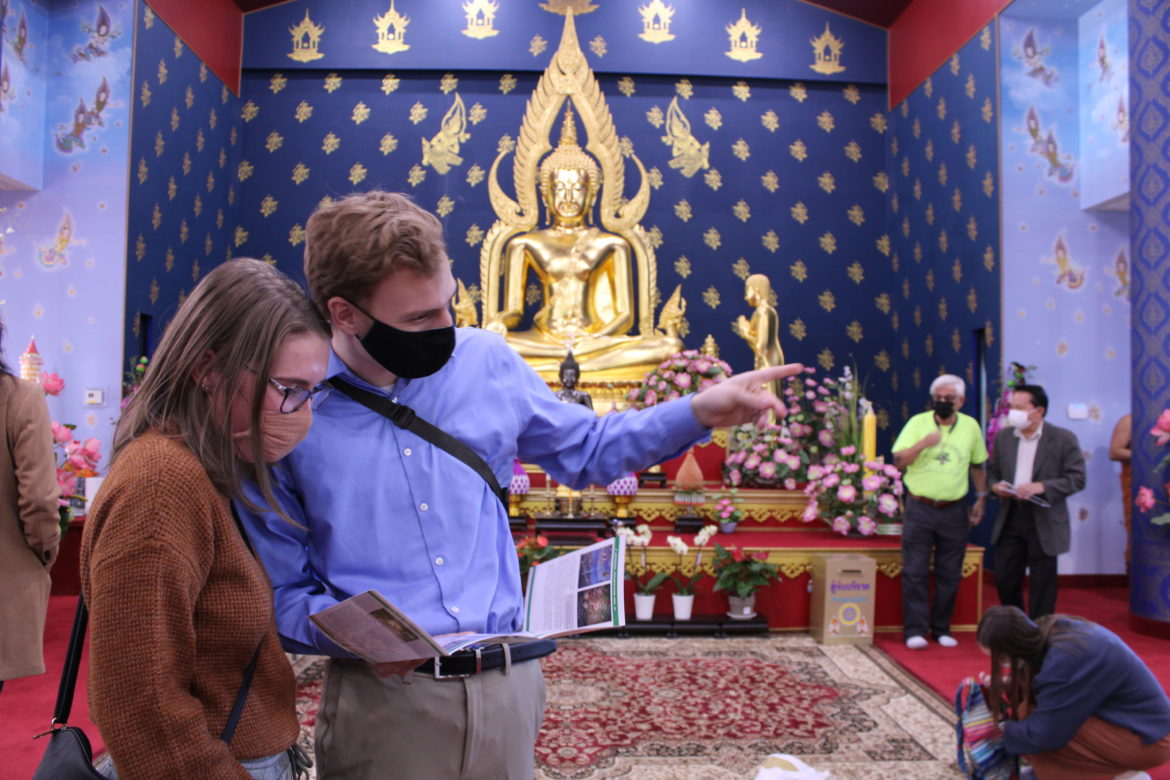 Dean of the College of Bible and Ministry Dr. Monte Cox is teaching the class and organized the trip for his students after three semesters of having to cancel due to COVID-19.

Cox said the group visited a Hindu temple, a Buddhist temple, a Sikh temple and a mosque on Friday; a Jewish synagogue and a Baha’i center on Saturday; and a Christian church before their departure Sunday morning. Cox said there was another Buddhist sect that visited the students in the hotel Saturday, since their temple was temporarily closed.

“I think the most important outcome of the trip, which I would say is a goal for the class, is for students to overcome the intimidation factor,” Cox said. “We tolerate any religion, but we are also ignorant of what these other religions believe. We tolerate from a distance. We leave each other alone. What I’m trying to do is educate these Christian kids about their religious neighbors so that they would engage in conversation.”

Senior Audrey Lawrence, who was part of the group that visited Dallas, said it meant a lot to her to be able to connect with people of different religions and see them as more than just “other.”

“Listening and learning from them is the first step in forming relationships with them,” Lawrence said. “I went in not necessarily understanding how they individually saw their own religions, and it was really fascinating to listen to them describe how their own religions affected their lives.”

Sophomore Brinson Davenport, who also attended the field trip, said learning about other religions through a Christian lens gives him a deeper Biblical perspective. Davenport said Cox uses the phrase “religious neighbors” to describe other religions, which gave him a more open attitude prior to the trip.

“Using that kind of lingo and vocabulary really gets us in the mindset as Christians; these aren’t our enemies,” Davenport said. “These aren’t people we should scorn or condemn. These are our neighbors.”

Davenport said before the trip that he hoped to be given opportunities to share his faith while visiting the various religious services.

“We’re gonna have meals with these kinds of people, and we’re just gonna have moments where we can talk to them,” Davenport said.

Cox said he has been teaching the class since 1998, and he first had been taking students to Chicago every semester to visit worship services. He said after a few years, he formed more relationships with congregations in Dallas, which allowed him to take students there and alternate between Chicago and Dallas every semester.

Cox said he visited St. Louis in October 2019 and planned a trip to go there in spring 2020, but the pandemic prevented him and his class from taking that trip. He said he plans to start including St. Louis in the rotation and will take his class there spring 2022.

Cox said he also used to offer a one-day trip to Memphis for students who were not able to go on the full-weekend trip. He said they would only visit three different services, but it was better than visiting none at all, since the exposure to different religions was still there.