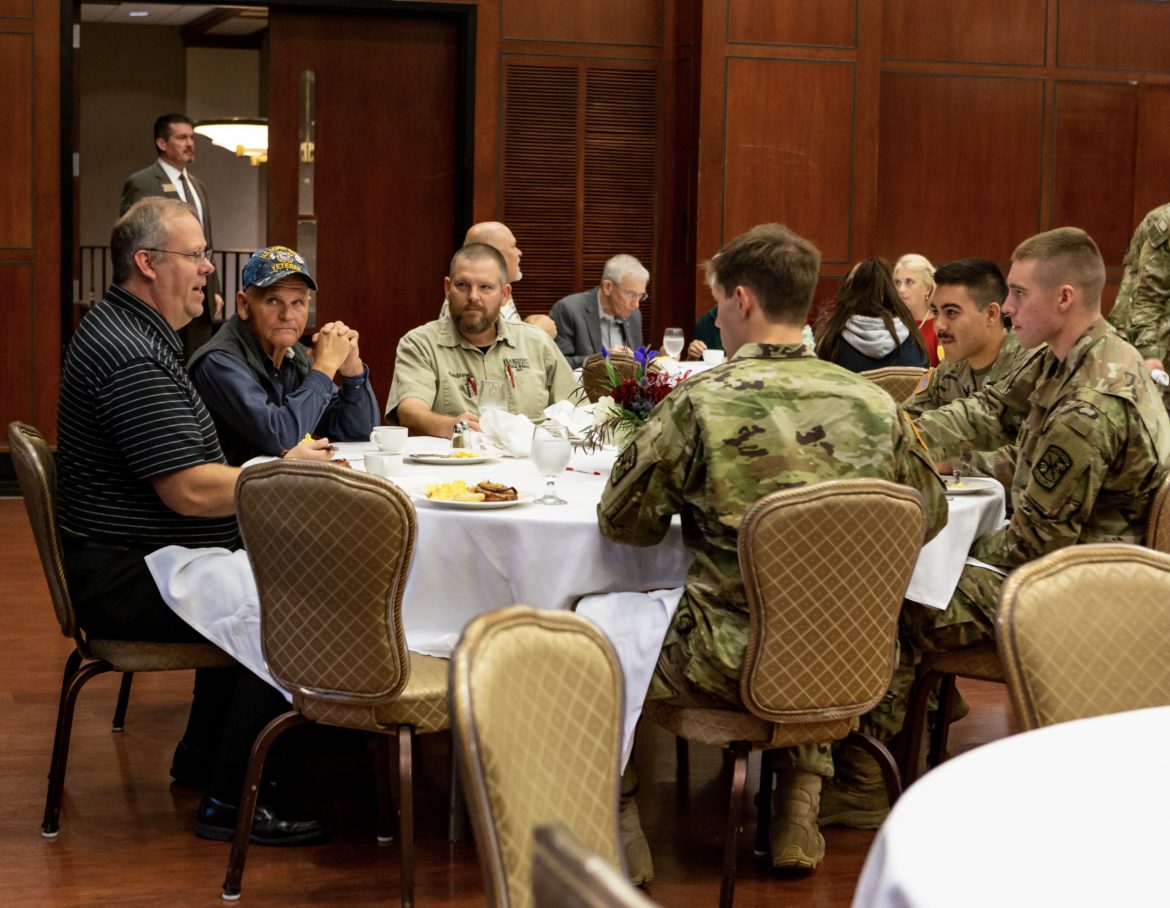 The American Studies Institute (ASI) held its annual veterans’ breakfast in Cone Chapel Thursday. The event lasted about an hour and included a brief presentation by Col. James Gant. Veterans from the Searcy community were invited and served a complimentary breakfast.

“We want to honor those that have served in any branch of the military,” associate professor of history and ASI executive director John Richard Duke said. “As I look down the RSVP list [for the breakfast], I know just about [everyone]. Sometimes you forget that they spent part of their lives serving the country in this way, so you want to honor that and honor them.”

Some students also attended the breakfast and talked with the veterans while they ate.

“It’s a very informal type of thing,” ASI co-president senior Seth Sims said. “We get to sit and talk with them about their experiences and their life.”

The breakfast aimed to show appreciation not only for veterans in the community but also for student veterans on Harding’s campus.

“Very often, student veterans feel left out,” History Department chair and ROTC faculty liaison Dr. Shawn Fisher said. “They are typically older, and they don’t fit in on campus quite as well. Something like a veterans’ breakfast is a way to make a gesture to those students [to show] that they are remembered, that their service is respected and that the campus cares about them.”

Student veterans and current service members comprise around 0.5% of the student population on campus, and Fisher said that it can be easy to overlook these students.

“Though [non-traditional students are] a small percentage of the total student body, they’re important,” Fisher said. “As we think about ways to engage with the student body, it’s important to remember that everybody that is sitting next to you in the classroom may not be like you. We know to think about that in terms of ethnicities and other [subjects] such as that, but sometimes military service is not on everybody’s mind.”

“I think it’s important to show some sort of commemorative memorial day activity,” Sims said. “We are the American Studies Institute, after all, and one of the aspects of ASI is history. Having something where we honor Memorial Day and honor our veterans just comes with the name. It’s something that we gladly represent and are a part of, and we are happy to host.”

One of ASI’s major goals is to form connections between students and community members, which activities like the veterans’ breakfast help do.

“ASI strives to give people at Harding access to information and people that they wouldn’t have access to [otherwise],” Sims said. “ASI gives you an opportunity to meet community figures …who have served and have incredible life stories and good advice to offer. I think that ASI is a great opportunity to reach out not just to Harding but Searcy as a whole.”