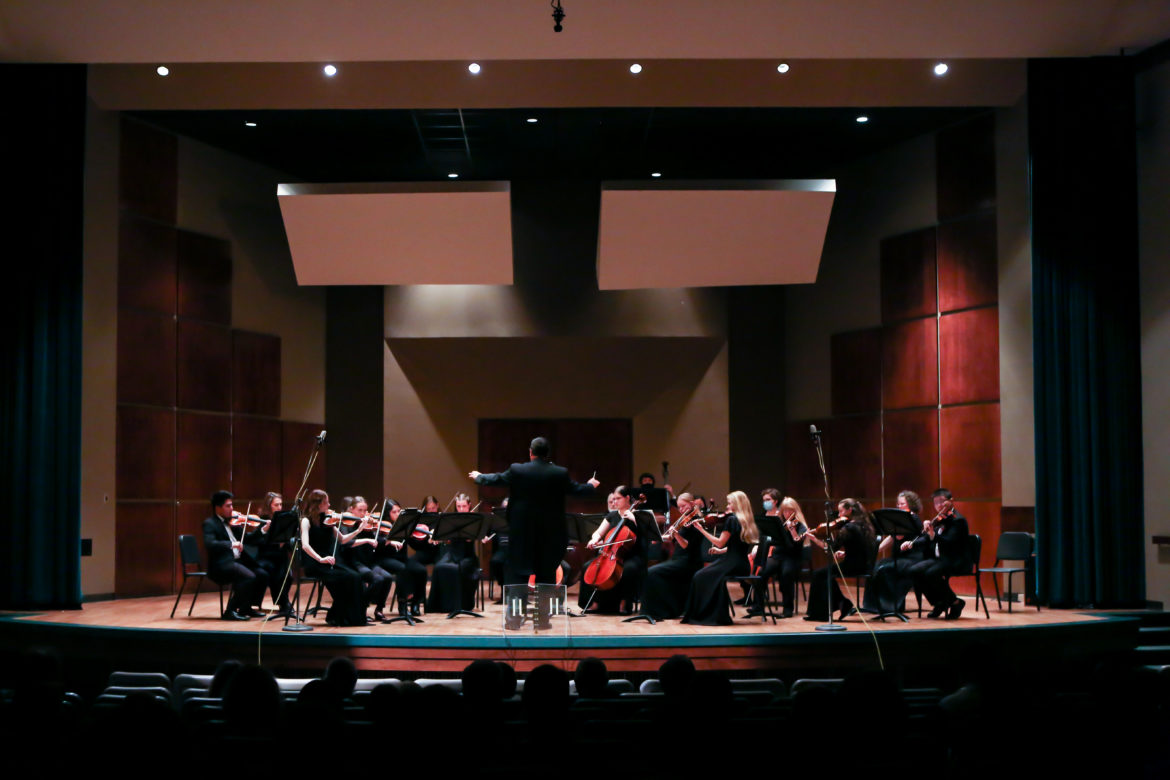 Harding’s symphony orchestra and wind ensemble performed for the first time this semester on Oct. 25 and Oct. 28.

“These guys are coming off of around 18 months of not really having a normal concert,” director of the orchestra and wind ensemble Eric Colgrove said. “So we’re all really excited to get to sit down and perform live music again for people, and we’re hoping that we’ll get to continue doing that throughout the rest of this year.”

Harding usually does not have a wind ensemble in the fall, so the ensemble is only able to rehearse one hour a week. Sophomore Eli Smith said they had only seven hours together to prepare for the concert.

“It’s a little stressful, but at the same time it has been a lot of fun getting to put it all together,” Smith said.

The symphony orchestra had significantly more time. According to freshman Abigail Kerr, they meet at least twice a week. The orchestra concert included a performance by Harding’s string quartet led by adjunct Alicia Walls; six movements from a suite by Leoš Janáček; and a piece by a Spanish composer Jose Padilla called “El Relicario.”

“I love the music we play,” Kerr said. “It’s always beautiful, and then I like the challenge of having something to work for.”

Colgrove said the music chosen for the wind ensemble concert was supposed to loosely represent the major milestone of the 20-year anniversary of Sept. 11. The first song, a piece called “Liberty Fanfare,” was written to commemorate the 110th birthday of the Statue of Liberty.

“Then we move into a piece called ‘A Hymn for the Lost and the Living’ by Eric Ewazen — just meant to represent kind of the human loss and the change in society that happened directly after Sept. 11,” Colgrove said.

The ensemble also performed “Chorale and Alleluia” by Howard Hanson and “Ride” by Samuel Hazzo.

“I didn’t want to be too much on the nose with this one, so it’s just our fall concert, but the pieces were all loosely based around what I thought would fit around ‘A Hymn for the Lost and the Living’ — what pieces I thought would relate well to that,” Colgrove said.

The history and composition of the songs impacted members of the ensemble like Smith just as much as the audience.

“I just see a lot of emotion in not only the pieces, but like as we’ve played them … it’s taken me into a deeper appreciation for how we’ve come out of that,” Smith said.