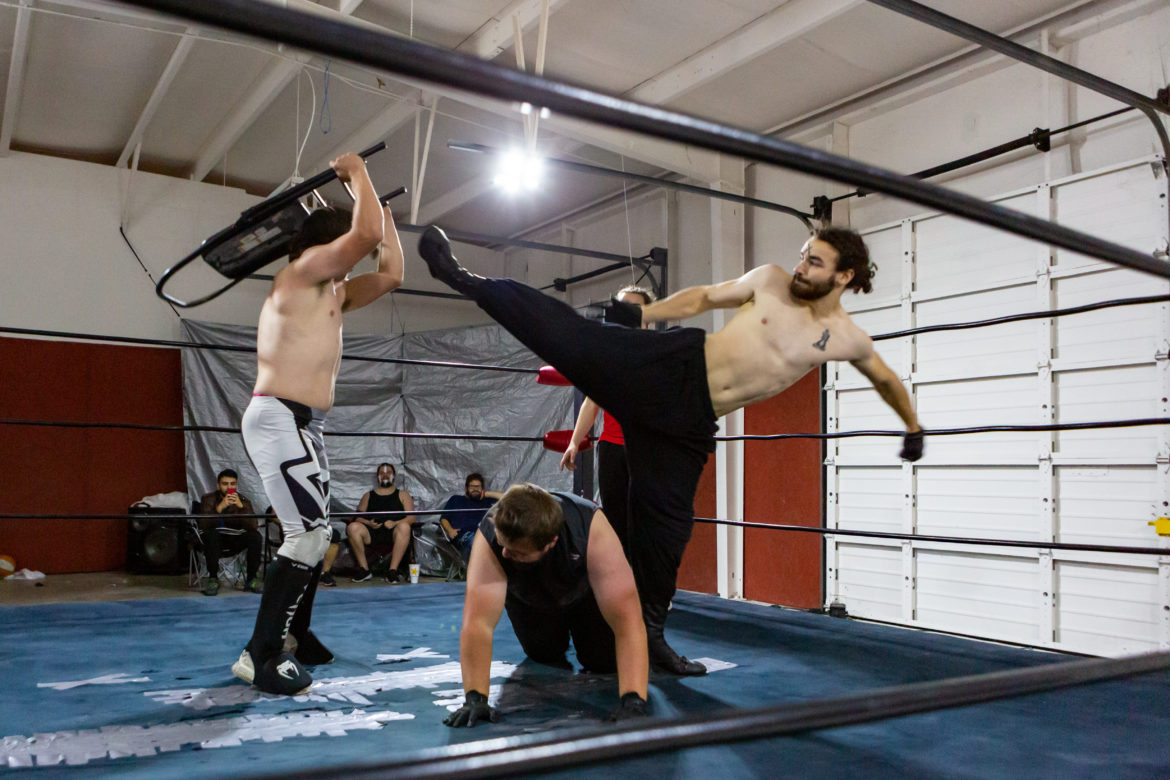 During his time off from working with the grounds crew at Harding, Jaxsen Burton has often spent his weekends this fall combining sports and storytelling through an organized wrestling group in Searcy.

Burton said he and two other men, Dallas Loftis and Justin Driver, are heads of the organization Action Wrestling Entertainment (AWE). The group practices a form of scripted wrestling, featuring storylines and characters with a variety of personalities.

“Everyone is given the creative freedom to cultivate their own character, their own persona that they want to display on the screen,” Loftis said.

On Friday, Oct. 29, eight members gathered in a storage-unit-turned-makeshift-arena to participate in a match or watch the action unfold. Multicolored lights dimly lit the space, and rock music blared as each wrestler emerged from behind a silver curtain. Burton, who competed under the name Jaxson Pallas, walked out in a black coat and sunglasses. He removed them for the match, in which loud thuds filled the room as wrestlers body-slammed each other and displayed a variety of moves.

Burton said he grew up as a fan of professional wrestling. In 2020, the year he graduated high school, Burton learned about a group that engaged in organized wrestling in Searcy and decided to join.

Burton said the group pooled their resources to pay for construction of a fighting ring in their building at 508 E. Booth Rd. Burton also said James Wood, who used to work behind-the-scenes at World Wrestling Entertainment, helped to train members of AWE. Loftis said Bobby Rush, a wrestler who has competed with local companies in places such as Memphis, Tennessee, also taught the group skills.

Burton said he has learned a lot since joining AWE, such as ways to draw a crowd’s attention, perform different moves and show respect for others during the competition.

“A match is dissected down into very, very miniscule details,” Burton said. “There’s psychology behind it; there’s obviously the athleticism.”

Although AWE does not have any official upcoming events, Loftis said the group has been posting videos of their matches on Youtube. Each episode is typically about an hour long and contains three to five matches, as well as segments devoted to character and story development.

The group does not have a regular practice schedule, but they meet when they can, especially on weekends, to practice skills and film matches, Burton said.

Burton and Loftis said over 20 people are part of AWE. Burton said anyone who is curious about wrestling or interested in joining can come to their practices.

Loftis said he originally pitched the idea of starting a wrestling group to his football teammates and others while he was a student at Searcy High School (SHS). The group posted their first wrestling video to Youtube in 2019.

SHS student Chandler Stinson said the hardworking people in AWE have helped him cultivate his passion for wrestling.

“I love doing it,” Stinson said. “It’s what I wanted to do ever since I first started watching it on TV.”