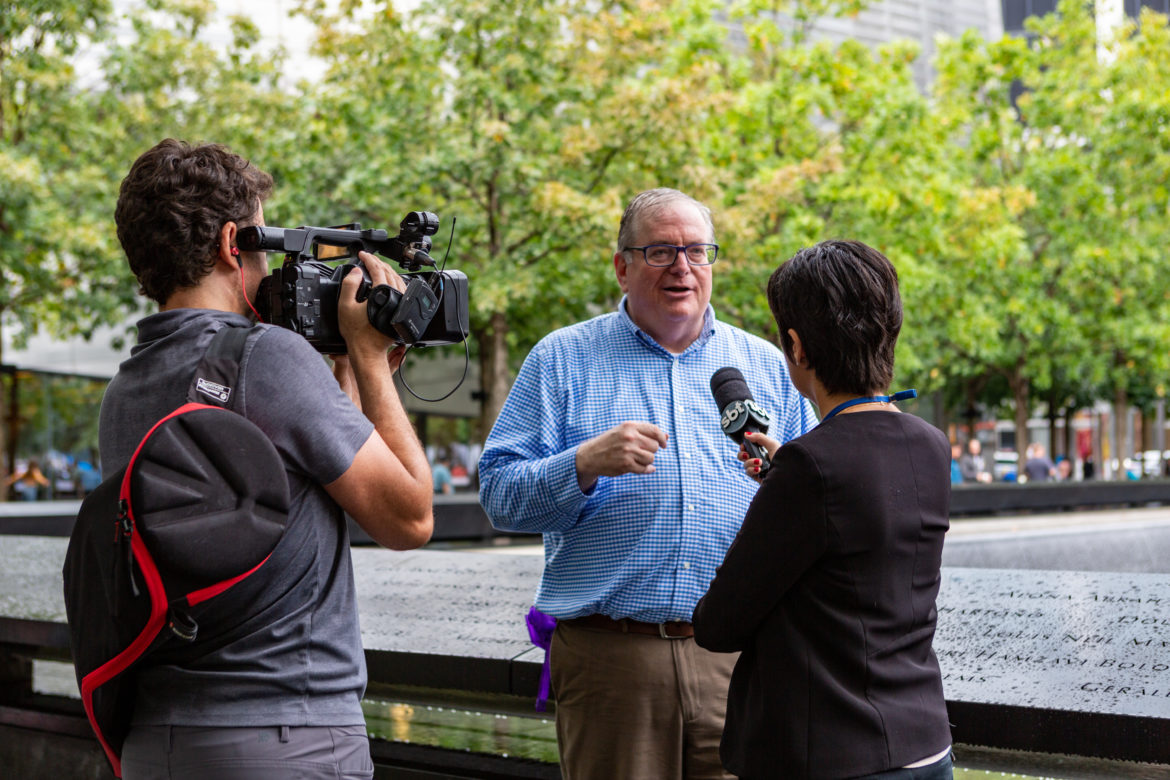 Eleven honors communication students and five communication department faculty members traveled to New York City from Sept. 8-12 to observe the 20th anniversary of the Sept. 11, 2001, terrorist attacks on the World Trade Center in New York City. Each student on the trip fulfilled an honors contract on a topic related to 9/11, the events surrounding it and the effects felt worldwide.

The group visited the Sept. 11 Memorial and Museum at ground zero on Thursday, Sept. 9. While there, Dr. Jack Shock, distinguished professor of communication, was interviewed by multiple news outlets about his experiences at ground zero in the weeks following the attacks. Shock was called to New York by a former student, Darren Irby, national marketing officer of the American Red Cross, to assist with Red Cross media relations.

Seated in the same spot in the New York Marriott Marquis where he met with the rest of his team each morning in Sept. 2001, Shock told the students of his two weeks at ground zero with the Red Cross.

“My job was to bring the story out,” Shock said.

Even national news correspondents from outlets like NBC, ABC and CNN had restricted access at ground zero, as the National Guard patrolled what was an ongoing investigation. Journalists would often speak to Shock as a liason, who would then enter the Red Cross area to find someone willing to share their story.

“At that moment, that firefighter became my client,” Shock said. “It was up to me to ensure he had a safe experience that did not exploit him, that did not put him in a zone that would be unhealthy for him, and also to accompany him to and through the interview.”

Shock described the many interviews that he took part in, where he stood directly behind the camera and the interviewer, as a presence of familiarity.

“I could stop the interview if I saw him in distress, and I made that clear with the reporter,” Shock said. “The number one issue here is the safety and wellbeing of the subject, especially at this brutal time. “

Dr. Ginger Blackstone, associate professor of communication, was beside Shock in the seating area, sharing with the students. Blackstone worked as a producer for CNN in Atlanta in Sept. 2001. She and her team have since received an Emmy Award for their reporting work over the course of the weeks following the attacks, as America learned about the terrorists’ motives and the U.S. government’s response in real time.

For Blackstone, Sept. 11, 2001, was her day off. Unaware of the initial plane crash, when the second plane hit the second tower, her two cell phones, landline and BlackBerry all began to ring at the same time. After learning of the events, she was advised to stay home, and rest up for the work that would ensue in days and weeks to come.

“All of the Turner networks, all of them — even like TNT, TBS — they were all simulcasting CNN, including CNN International,” Blackstone said. “The thinking was, there’s no point in us clamoring over resources right now, we just need to centralize the message.”

“You just had to go on feeling,” Blackstone said. “There was no rulebook for this. Nothing like this had ever happened. Like, when is it okay to run a commercial again? When is it appropriate?”

Junior Emily Stinnett was a student on the trip and created a video documentary of it. A shorter version of her work, specifically focused on the reflection of students, was shown in chapel on Friday, Sept. 10. Her project documented the visit to the memorial, as well as visits to St. Paul’s chapel, Trinity church and the Engine 54, Ladder 4, Battalion 9 firehouse on 8th Ave. in Midtown Manhattan. Fifteen firefighters from Engine Co. 54 went to the World Trade Center on Sept. 11, 2001, and none returned — the most men lost from a single engine company that day. The firefighters there shared their personal stories with the students and faculty and shared memories of colleagues that had been lost.

Stinnett said that one of the most memorable moments of the trip to her was reading the names of the 2,977 people that died on 9/11, seeing their faces in photos and learning more about their individual lives.

“I think it’s easy to define those people by their death,” Stinnett said. “I mean it was a huge event, and it was a huge attack — but they deserve for their full stories to be remembered and told. I want to be able to help remember and tell their stories.”