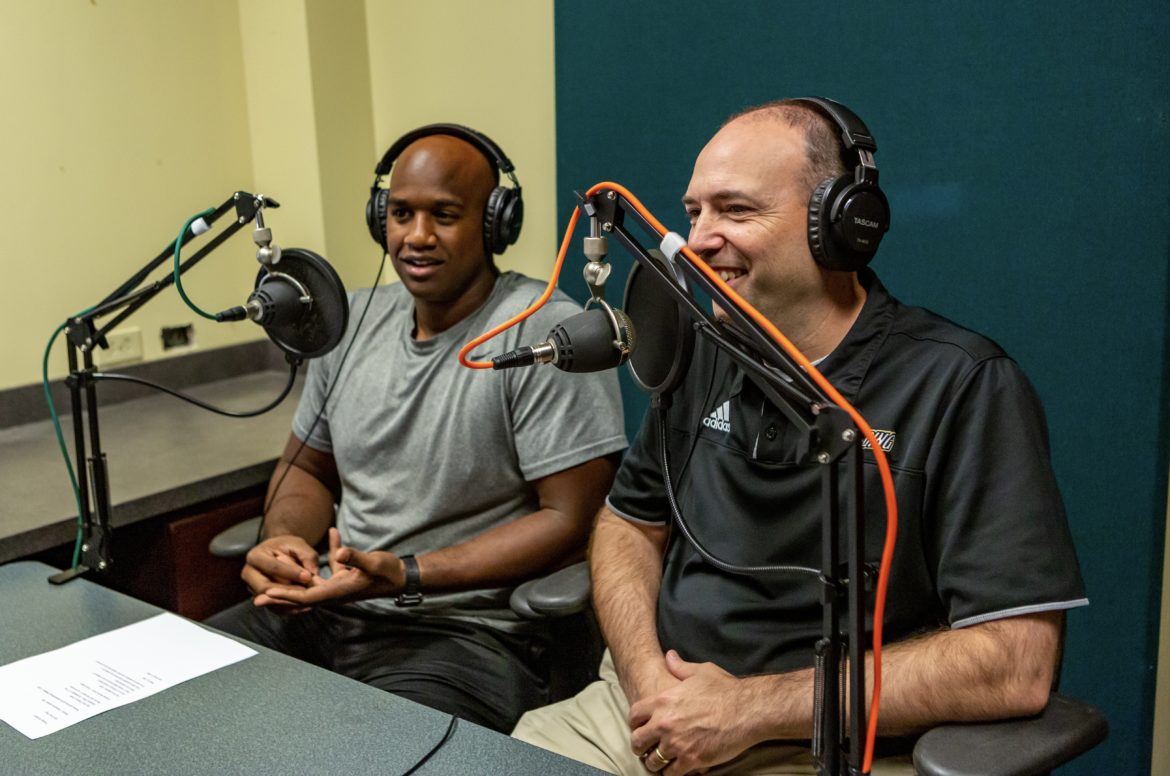 Harding sports announcer Billy Morgan hosted the episode, which was recorded Thursday, Aug. 26, in a new podcast studio in the Donald W. Reynolds Center for Music and Communication. During the episode’s opening minutes, assistant sports information director Scott Goode announced upcoming Harding athletic events. Morgan and Goode then revisited a historic field goal kick by a Bison football player in 2011. The pair also interviewed Harding athletic trainer Lacy Rush about her day-to-day responsibilities and her experiences of working during the COVID-19 pandemic.

Goode said the goal of the podcast is to introduce Harding fans to a variety of people who play essential roles in the athletic department.

“There’s a lot of people that are involved with things here at Harding that don’t get very much publicity, or they do a great job behind the scenes that people don’t know about,” Goode said.

Goode added that the podcast team plans to release a new episode each week but has not decided on the best days to record and release each installment. Goode said the team plans to interview students, coaches and other behind-the-scenes workers in the future. They also hope to focus on other moments in Harding sports history, including funny anecdotes of events that happened on bus trips, in locker rooms and in press boxes.

Morgan said assistant sports information director Nathan Looney came up with the idea for the podcast and performs behind-the-scenes roles, such as producing the series and lining up guests for episodes. During the first recording session, Looney controlled audio levels in the studio as Morgan and Goode talked and interviewed their guest.

Goode said the episode was recorded in a small office space that Mark Prior, director of HU16 and VideoWorks, helped convert to a podcast room equipped with four seats and four microphones. Prior said he helped build the studio over the past summer so students could use the space.

“I’ve seen the need for it from students for the last four or five years,” Prior said.

Morgan said the conversation flowed smoothly in the studio because all three speakers and Looney could share the space simultaneously as they recorded the episode.

“It’s very convenient with the fact that we can have almost a round table discussion because we all are in the same room,” Morgan said.

Goode said he thought timing the release of the podcast with the return of Bison sports in the fall would help listeners catch up with Harding athletics after the pandemic disrupted the normal flow of sports schedules last year. Goode said if people have any suggestions about content for the podcast, they can send requests to sports@harding.edu.