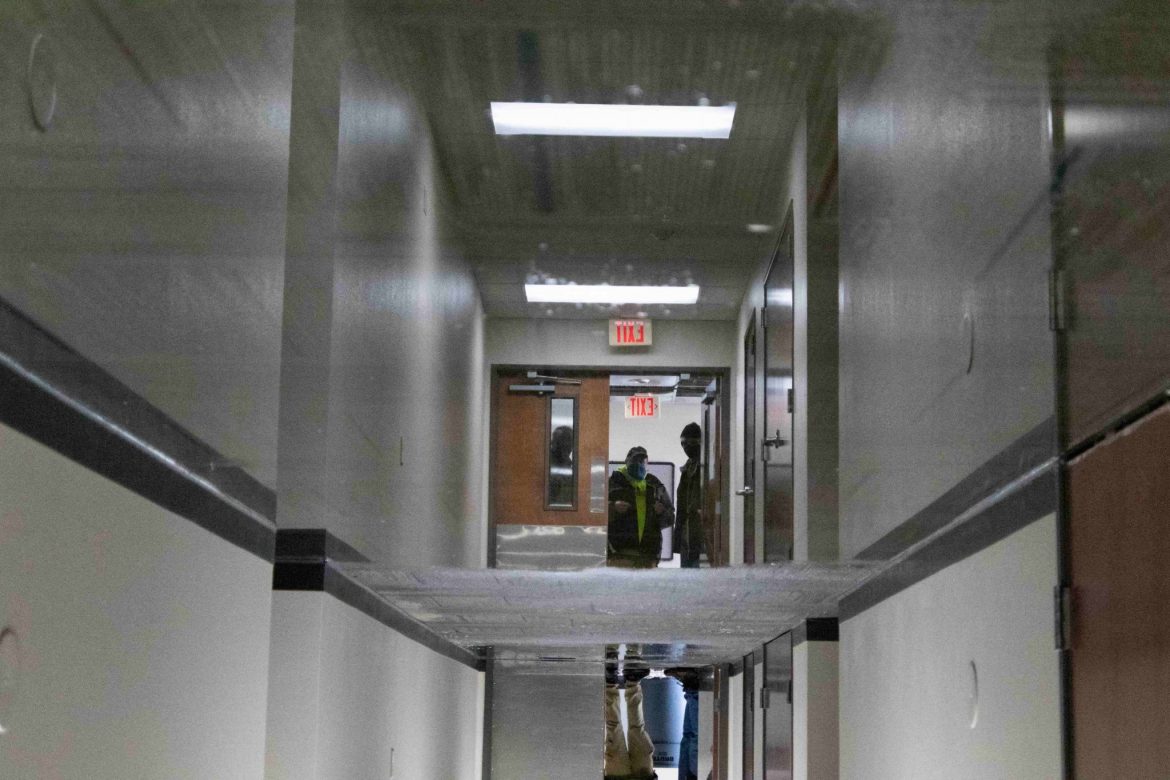 Harding University and the rest of Arkansas experienced two winter storms this week of a magnitude not seen in recent history, causing campus closures and damaging some University pipes.

The first snow storm that fell on the Harding campus and Searcy, Arkansas, began late Sunday night on Feb. 14, building up to about 5-6 inches of snow with temperatures reaching as low as zero degrees between Monday night and early Tuesday morning. The second storm appeared early Wednesday morning and continued through Thursday, Feb. 18.

The campus was mostly closed for the entire school week, only leaving a few places such as the cafeteria, testing lab and some restaurants in the student center operational for a reduced amount of time.

The Daily Citizen, citing information from the National Weather Service in North Little Rock, Arkansas, said the snow storm originated from the North Pole’s cold air, spreading across Arkansas. While temperatures did not reach record lows, the weather was unusual for Arkansas, a state that normally receives only a few inches of snow in the winter, if any at all, the Daily Citizen said. Even then, the snow would usually disappear quickly; this snow has remained for nearly a week.

According to the Daily Citizen, Dylan Cooper, a meteorologist from the weather service, believed it has been about four decades since Arkansas experienced this magnitude of a cold weather outbreak.

“As much as you can enjoy the winter weather, it is very hazardous,” Cooper said.

Harding residents have experienced the problems this winter storm can produce as issues with pipes were reported in multiple locations on campus. Dana McMillion, director of maintenance for Physical Resources, said sprinkler pipes froze and then broke in Cone Hall, an apartment in Village, the American Heritage Building and a weight room at the football field, causing water to leak in the areas.

Senior Matthew Emlaw, a resident of Cone, said he witnessed the pipe problems Harding was experiencing in Cone on Tuesday after hearing the fire alarm in his dorm and going downstairs.

“As [I was] reaching the bottom of the stair rail, I just [looked] down and I [saw] this little layer of water creeping across the floor to the bottom of the stairs and [I was] just like, ‘Oh, this is different,’” Emlaw said. “It was only like a half inch deep. I had my snow boots on, so I just kind of [walked] through it and as I [came] out into the lobby, I just [saw] this waterfall descending from the ceiling over by the side doors.”

Other frozen pipe issues occurred in other locations such as the cafeteria, a room in Searcy Hall and Legacy Park.

McMillion said his team was already on campus removing snow when the sprinklers started breaking.

“If we were at home, then we’d have a delay to get there and then more water damage,” McMillion said.

McMillion said he has been at the University for 15 years. During those years, Harding has only had a few pipes break. However, this year was different.

“This is the worst situation we’ve had,” McMillion said.

Despite the weather and pipe issues, McMillion said he believes Harding is in good shape and maintenance should have all the pipes repaired by the middle of next week.