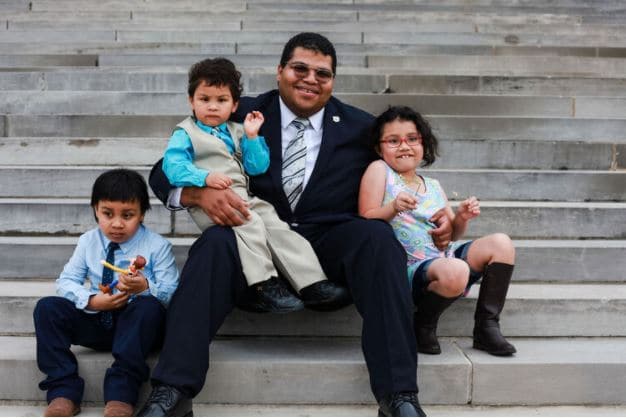 Harding alumnus Ricky Dale Harrington Jr. recently ran for election as the Libertarian candidate to represent Arkansas in the United States Senate. Harrington, a 35-year-old former prison chaplain, said he decided to run after seeing the need for third parties and new ideas in our political system and a growing disdain for the two-party system.

“I am of the opinion that we need other political parties in our political system,” Harrington said. “In America, it’s just Democrat and Republican, and I used to be a Democrat … I just took the leap of faith politically. I have always been involved in politics, but I just could no longer support the two-party system.”

Harrington ended up being Republican Senator Tom Cotton’s main opponent after Cotton’s Democrat challenger dropped out of the race. Because of this, Harrington attracted state and national interest which led to the local PBS affiliate scheduling a debate between the two candidates. Cotton declined to attend, but Harrington went solo, leading to one of the most memorable — and his personal favorite — moments from the campaign.

“After that debate, we raised almost $60,000,” Harrington said. “It really was such a memorable moment, both preparing for it beforehand with my team and then the amazing aftermath.”

Although Harrington lost the race, he garnered nearly a third of all votes and won the heavily populated Pulaski County, something no third-party candidate has done in recent years. Because of this, several Harrington supporters and Arkansas residents are paying attention to Harrington’s future in politics, including Harding senior Ben Gazaway.

“Because we see so few non-partisan candidates running for national offices, I would like to see him rise in the political landscape, whether that’s at a state level or at a federal level,” Gazaway said. “It’s not just because I support his beliefs, but because I believe he could help inspire change in the country as a whole.”

Gazaway was not alone in believing in the change that Harrington could bring. Junior Ethan Brazell, who interviewed Harrington for HU16, saw firsthand Harrington’s strengths as a political figure.

“I truly think his message resonated with Arkansans because his rhetoric is very unifying,” Brazell said. “He has unique positions on many issues and puts people over politics. He is also a very devoted follower of Christ and that reflects throughout his positions. He is very optimistic, pragmatic  and kind, and I think those characteristics made him very appealing to voters.”

After getting involved in politics and running a campaign for the Senate, Harrington said he has some words of advice for any Harding students who may be wanting to pursue a similar path.

“You have to start getting involved in your community when you are young,” Harrington said. “If you have time, go to the capital and figure out what kind of laws are being passed and go ahead and build your own platform. [Be] engaged right now, and don’t wait until you’re older.”