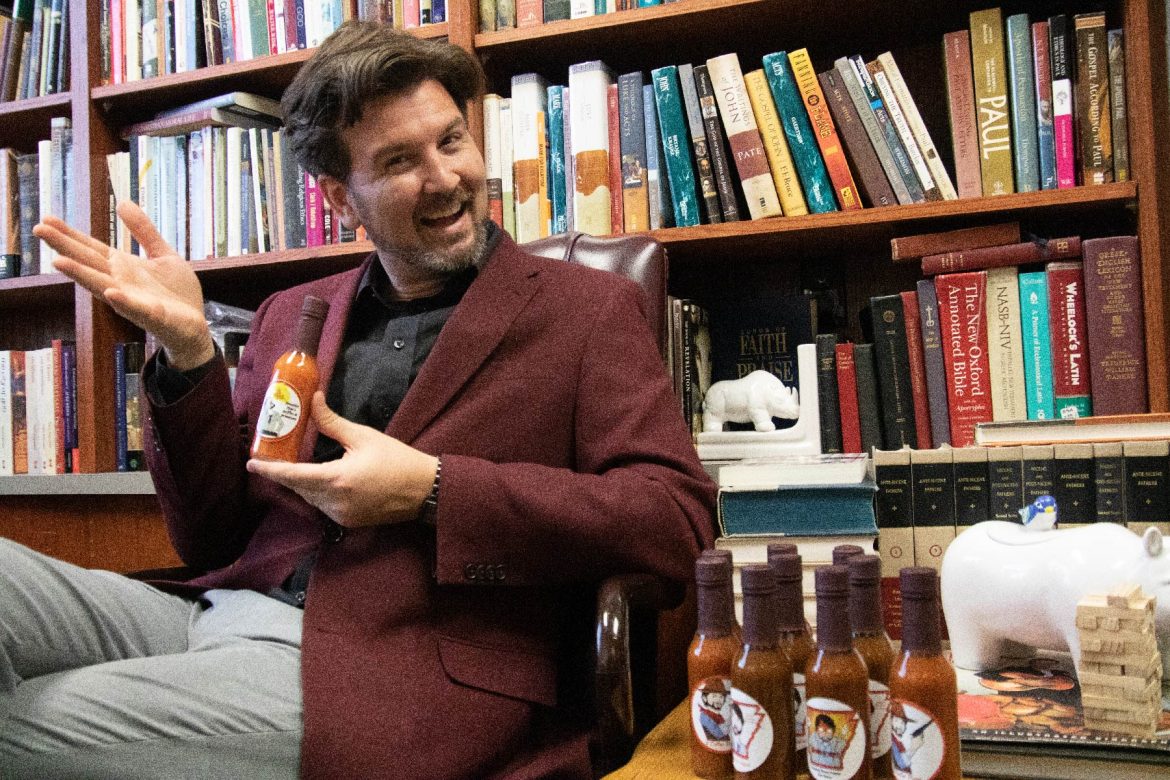 Mac Sandlin, assistant professor of Bible and ministry, has developed his side hobby of making several flavors of hot sauce, which has gained popularity among students and faculty at Harding and the White County community.

Sandlin said that his interest in making hot sauce began about three years ago, when he decided to put his efforts towards creating a good sauce that he and his brother-in-law would both enjoy. He said that, around this time, he had also gotten into smoking meats and decided to try the technique on the peppers he was using. After some experimenting, Sandlin finally got the results he was looking for last October, making the best hot sauce that he said he had ever tasted.

“After that, I was making a bunch of it just to try to get good at it,” Sandlin said. “I had probably six gallons of the stuff sitting around, so I began to give it away to people. Around Thanksgiving Break last year, I decided to start selling it to see if people would buy it as a stocking stuffer. And then people began to order a lot of it, and I was surprised. Even at this stage though, it is still very much a hobby. I’m doing this for fun.”

Sandlin said that all the peppers he uses for his sauces are grown in his father’s garden in White County. He uses a commercial kitchen when making his sauce, as is required by the Arkansas Cottage Food Act, when manufacturing hot sauce to sell.

“I think that when you compare it to other hot sauces, it’s fun to know that it was completely homegrown and homemade,” senior Easton Davis said. “It’s also fun to be able to say, ‘Yeah, my professor made that.’ Since Mr. Sandlin is such a food connoisseur you can trust that he tested it out and made each sauce pair well with a certain type of food.”

There are six flavors of Sandlin’s hot sauces to choose from. His sauces that contain smoked peppers are Two Dollar Pistol, which Sandlin said was probably his favorite; Arkansas in August, which is slightly hotter; Scary Hot, his spiciest flavor; Baby Dragon, which is mild; and Hot Sugar, which is spicy yet sweet. The other flavor is Preacher Mac’s Hellfire and Brimstone, which is the only sauce Sandlin sells that does not contain smoked peppers.

“I like Mr. Sandlin’s sauce because the ingredients are high quality and local, and its flavor is perfectly smokey,” sophomore Sam Stebbins said. “I love the Two Dollar Pistol. For people who like hot sauce, Sandlin’s sauce is a must try.”