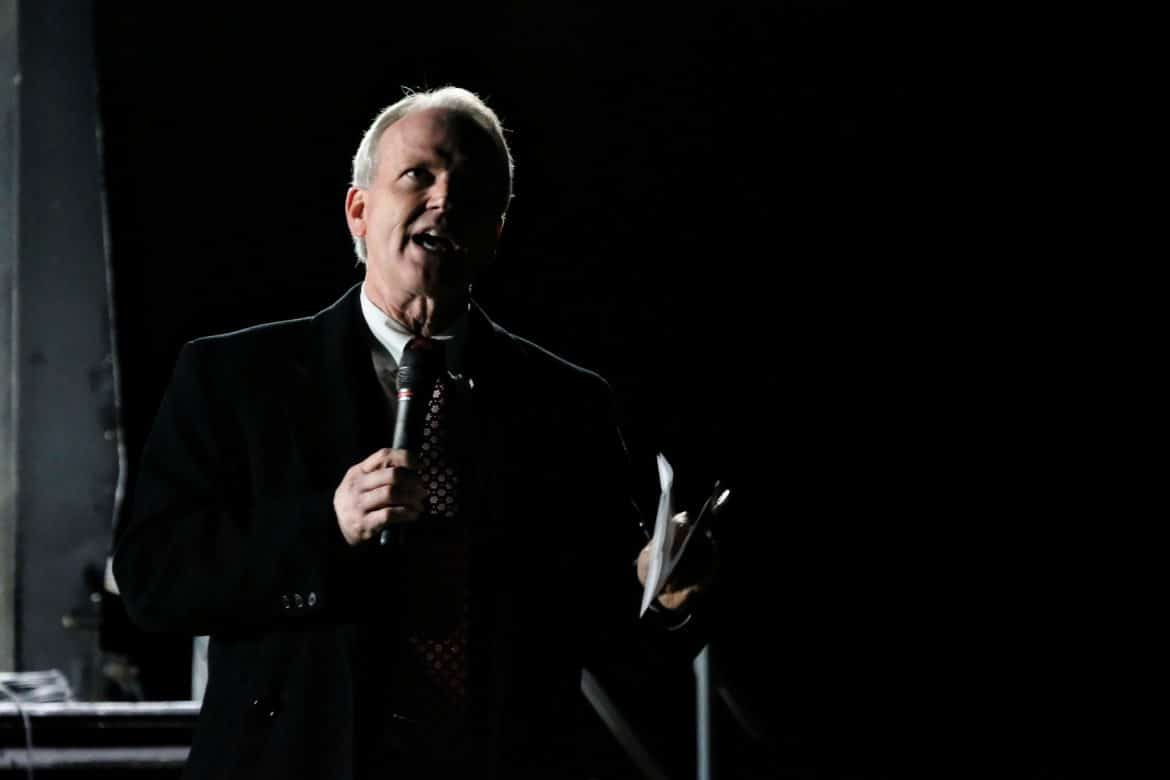 This announcement came on the Friday of Homecoming weekend and exactly one month before McLarty’s retirement will take effect. McLarty is the fifth president to serve at Harding, and the only one to retire in the middle of an academic year.

The Board of Trustees met in Searcy Friday, Oct. 23. The Oct. 30 email said that “recent economic and higher education trends have created an extremely challenging business environment that has impacted the institution, leading the board to make a change.” Chancellor David Burks, who was University president from 1987-2013, will resume this role beginning Dec. 1 while a committee is formed to oversee a broader presidential search.

“This is a sad time,” Burks said. “This is a tough transition. All transitions are hard whenever you have a change in presidents, but when you have one in the middle of the year, I think it’s harder. I respect Dr. McLarty a great deal, love him very much, appreciate all that he has done and wish him the very best.”

In 2011, Burks also announced his retirement during Homecoming weekend; however, his would not take effect until spring 2013, giving the board and search committee — which was composed of then-current chairman of the board and six other board members — over one year to select a new president.

“This is definitely not typical for Harding presidential retirements,” Hannah Wood, archives and special collections librarian, said. “They’ve usually occurred at the end of a school year.”

Senior Ellie Akins said she was shocked by both the timing and content of McLarty’s announced retirement.

“I was so shocked by the announcement on Friday,” Akins said. “I never once considered losing Dr. McLarty as a president during my time at Harding as even a possibility, so hearing that was very surprising.”

For his second time assuming this role, Burks said it is different in a lot of ways.

“It’s not the same as it was in 1987 when I was young, excited and enthusiastic and didn’t know what was in front of me,” Burks said. “So, it’s different. I do know what the job entails — I did it for 26 years — and I know it’s tough to take over in the middle of a COVID-19 year, but as I told Dr. Walker … I’ll simply do the best I can until a new person is selected.”

Junior Hannah Arnold also said she was shocked and confused by the announcement.

“It just doesn’t seem real still,” Arnold said. “I’m very anxious for this transition that is happening in the middle of this year. I feel like it will be very apparent on campus next semester and it will be different for all of us. [McLarty] really cares about us as people, not just numbers.”

Burks said there is no definite time frame for when a new president will be selected.

Burks said his focus for his time as president is similar to that of McLarty’s: to continue Harding’s mission of providing the best Christian education and college experience possible for students. As mentioned in the University’s original email, Burks said he also wishes to increase enrollment numbers for the school.

“One of the things I’d like to see happen is I’d like to see more and more students admitted to Harding,” Burks said. “I’d like to see the enrollment grow. We’ve seen it decline in the last several years. I would like to turn that around, but that won’t happen overnight. That’s a tough challenge, but I’d like to see it grow, and I’ll be doing everything I can to see that happen.”

Over the past several years, Harding has seen a decline in enrollment. From the 2013-14 academic school year to fall 2020, undergraduate enrollment has dropped from 4,417 to 3,579.

In an email responding to this writer’s questions, McLarty said his prayer for Burks is that “God will give him tremendous wisdom, great strength, deep peace and amazing joy in leading this university once again.”

“I hope people will remember my time as President with a smile on their faces,” McLarty said. “I hope they know that I loved them, was deeply interested in them, and that I was always confident that God was preparing them for great things. People thrive in a place where they are safe, valued, encouraged and loved. I pray for every student who steps on this campus to have such an experience.”

Burks said he is hopeful the University will be able to find unity throughout the transition.

“My specific concern is that I hope we can all come together and work in unity to achieve our goals and create the best experience for students,” Burks said. “I’m confident God will work through the situation, and I’m confident that our future is very bright.”