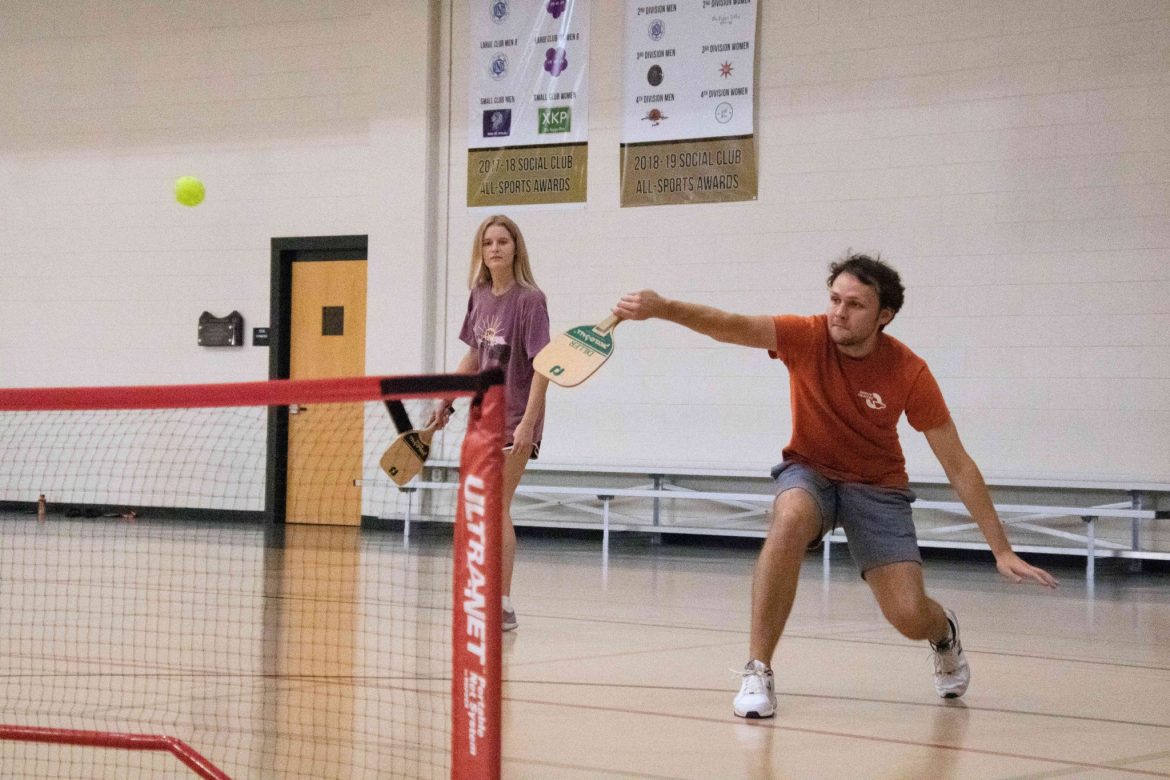 Pickleball is a sport that some people may not know; however, it has gained popularity in America and on the Harding campus over the years, becoming an ideal activity for fun competition and socialization.

A sport invented in 1965, pickleball is a mixture of Ping-Pong, badminton and tennis, involving two or four players. A net, solid paddles and a wiffle-like ball are used to play the game with the goal of having two or more points than the opponent by the time one acquires 11 points. If this goal is not met, then the game continues until someone gets ahead by two points. This rule eliminates any possibility of a draw.

At Harding, this game is usually played in the Ganus Activities Complex. David Redding, head coach of the men’s and women’s tennis teams, instructs a kinesiology activity class called “Pickleball and Badminton,” though Redding said the class is largely dedicated to pickleball.

“I call pickleball ‘Ping-Pong on steroids,’” Redding said. “It’s as if you are playing Ping-Pong on top of a big table.”

Starting his pickleball career in 2013 after learning of its existence from a friend, Redding said he has played in pickleball tournaments across the country, winning national championships several times. The win he said he is most proud of occurred in the summer of 2015 in Minnesota, where he won the National Senior Games championship tournament with his wife. Since coming to Harding, Redding said he does not play pickleball competitively nearly as much; however, he won his most recent tournament in Dallas earlier this month in the Texas Senior Open.

“Other than my faith and my family, pickleball, probably right now, has grown into one of the most important things in my life,” Redding said. “And not pickleball per se, but what it has led me to: I’ve developed deeper relationships with people. I’ve met so many new friends. It [has] actually grown [my] family closer together.”

Although pickleball can be competitive, the game creates a social atmosphere as competitors must be close to the net. After discovering pickleball toward the start of October, sophomore Maryclaire Franklin said she played everyday for two weeks with her friends.

“I like that [pickleball] is such an active game,” Franklin said. “I like being active, so it’s a really fun outlet for that while still being social with my friends.”

Sophomore Seth Hammitt, who attends the pickleball class at Harding, said he also sees pickleball as an activity that can bring people together, as anyone can play, regardless of age and athleticism.

“Play pickleball,” Hammitt said. “I highly recommend it. It sounds like a silly sport, but it’s super easy to learn, super easy to play and a lot of fun. And, anybody can play it.”