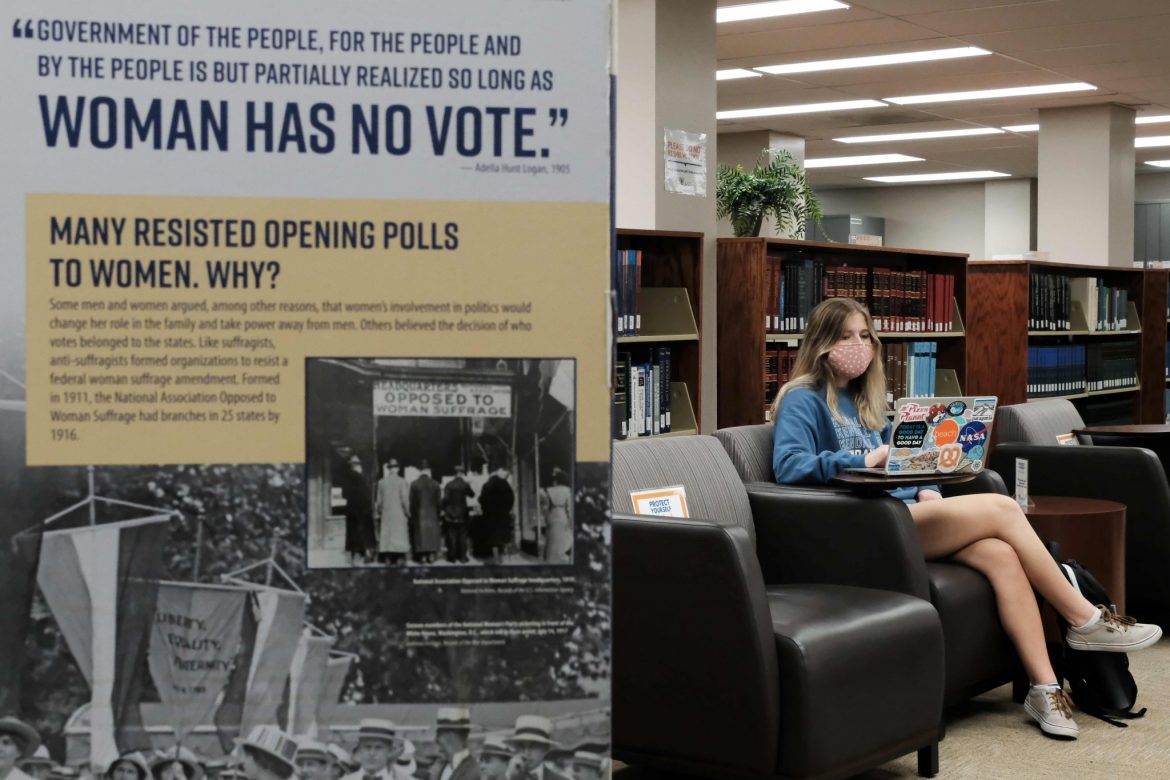 Sophomore Kayla Melton studies across from the "Rightfully Hers" exhibit displayed in the Brackett Library, Oct. 13. (Photo by Audrey Jackson)

The Brackett Library is celebrating the 100-year anniversary of the 19th Amendment, which gave women the right to vote, by holding an exhibit called “Rightfully Hers.”

The Rightfully Hers exhibit details the events of the women’s suffrage movement and was given to Harding University by Dr. Cathleen Shultz — registrar of the Frederick Van Patten chapter (located in Searcy, Arkansas) of the National Society of the Daughters of the American Revolution. The retired faculty member and founding dean of Harding’s Carr College of Nursing, Shultz said the exhibit reminds the United States of what it often forgets.

“I believe that exposure to this important history has been sparse in recent years,” Shultz said. “Our country forgot how long it took women to attain the right to vote. The exhibit was made by folks at the National Archives and distributed to communities across the country to honor the women and their journey as well as achievement of the right to vote. It’s fascinating to view the progress, the setbacks, the marches and protests, and the hurdles they faced. We take the vote for granted many times.”

Jean Waldrop, director for Brackett Library, said she hopes the exhibit encourages young women on campus to appreciate those who came before them and allowed them to have the opportunities they now have access to today.

“I hope that the exhibit will make the young women here think about and appreciate those women that came before us — that spent their time and energy to gain the right for us to vote,” Waldrop said. “I think that the most important takeaway from the exhibit is that no one should take lightly the privilege we have to vote and to practice this right every time there is an election that you can participate in. The United States of America is a great place to live where every vote counts.”

Senior Megan Moore works at Brackett Library, and she said the exhibit reminds her of just how brave the women who came before her were.

“It makes me feel empowered and reminds me of all the work that women before me did in order to ensure that I can have a voice in our political system,” Moore said. “These women were bold, brave and strong, and that inspires me to be those things as well.”

Shultz said that while this exhibit showcases how far the country has come, there is still some work to be done today.

“Work concerning women’s rights will continue for many years,” Shultz said. “For example, I believe that because more women than men lost employment due to the pandemic, the women will experience setbacks in equal pay, advancement and benefits.”

However, Shultz said she hopes this encourages young men and women to take advantage of the opportunities offered to them.

“My deepest hope is for male and female students to cherish their right to vote, appreciate America’s heritage of voting, and make a lifelong commitment to support democracy through voting,” Shultz said.