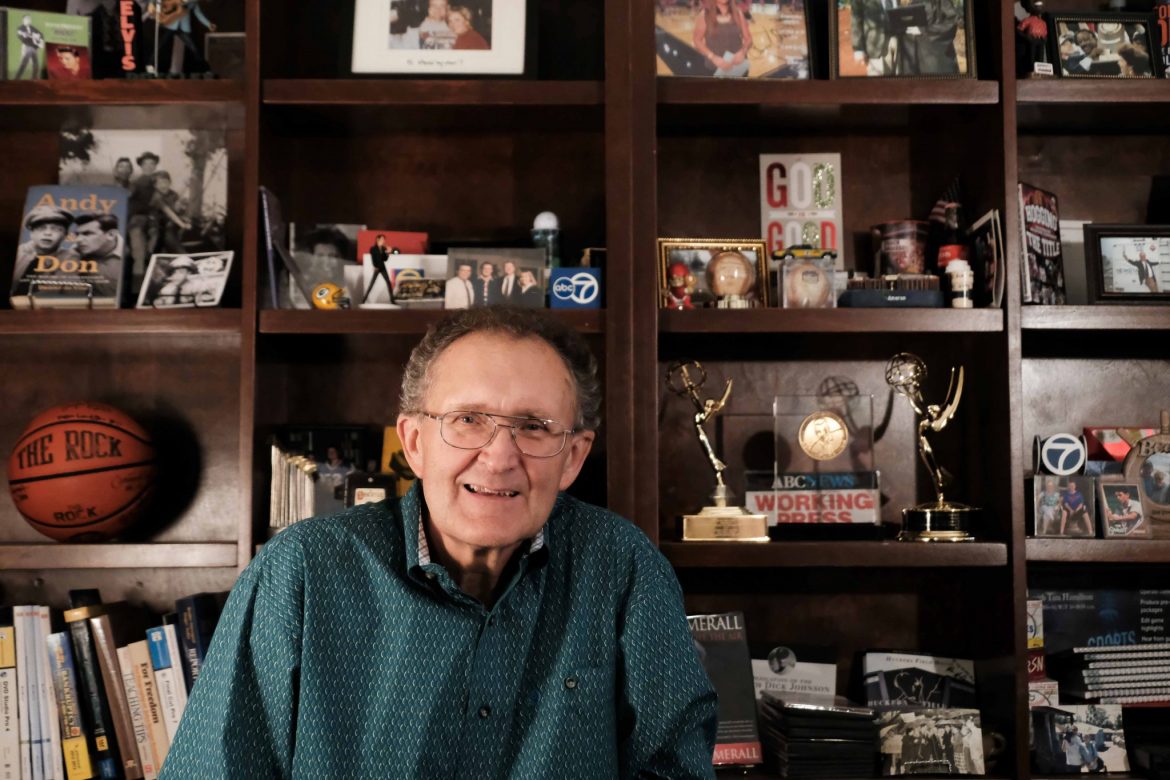 Tim Hamilton, assistant professor, sits for a portrait in his office, Oct. 20. (Photo by Audrey Jackson)

When walking into the small-windowed office of Tim Hamilton, assistant professor of communication, visitors will be greeted by some fanfare to whichever of his teams are in season; it usually cycles between the Green Bay Packers, St. Louis Cardinals and  Arkansas Razorbacks.

In Hamilton’s office rests an entire wall-sized frame, filled to the brim with credentials from his 30 years as a cameraman for Little Rock’s Channel 7. Many of these span beyond Arkansas, too. There are about as many World Series, All Star Game,and National Championship credentials in his office as there are local. The casually placed local Emmy awards do a good job of catching the eye, too. Needless to say, Hamilton has collected much recognition throughout his career.

In his 30-year career, Hamilton has seen more than many in the sports world could dream of. Hamilton’s broadcast journalism students throughout the years hear of these experiences daily and say they learn great lessons through the stories he shares.

“The most important thing you’ll learn from him is to say ‘yes’ to any and all new opportunities that may come, especially if it [is] something you have never done before,” Jonathan Bentley, Harding alumnus and graphic designer for North Carolina State University, said. “I always thought I would be behind the scenes in my desired field, but because I learned to say yes, I opened myself to undiscovered personal talents that helped me grow in numerous areas of my life.”

Senior Jackson Duncan has similar feelings toward Hamilton’s role as his professor.

“Tim Hamilton is a walking story book,” Duncan said. “He has been my favorite professor at Harding and actively seeks ways to give us, as students, opportunities to help us succeed in the future.”

Hamilton said that, throughout his career, he experienced thrilling moments, as well as

“As I was walking up to the media entrance at Busch Stadium in St. Louis for Game 5 of the 2006 World Series, it really hit me that the Cardinals might capture their first title since 1982,” Hamilton said about his time at Busch Stadium in 2004. “I was also thinking about being in the Red Sox clubhouse celebration when they defeated the Cardinals.”

Hamilton said that in order to enter the clubhouse, he needed a special media badge, in addition to the game press credential. After requesting a badge at the Cardinals game,

Hamilton said he experienced one of the greatest moments of his life.

“I decided to ask for a badge even though I thought my chances were slim,” Hamilton

said. “They gave me one. The Cardinals won. I was in the clubhouse for the celebration — one of the greatest sports moments in my life. I even got a pair of the goggles.”

In addition to exhilarating moments such as this, Hamilton said he also endured heartbreak, particularly in 1995 when the Arkansas Razorbacks were working for back-to-back championship titles.

“Arkansas won the NCAA basketball title in 1994,” Hamilton said. “The Razorbacks made it back to the championship game in 1995 and lost to UCLA. It was the SEC Tournament championship game against Kentucky that year that still stings.”

Hamilton went on, saying the Wildcats were down six at the half, but managed to force overtime. Arkansas led by 10, before  letting it slip away 95-93.

‘It was the saddest locker room that I ever experienced”, Hamilton said. “Tougher than the one after losing to UCLA. Arkansas-Kentucky basketball is much like the old Arkansas-Texas rivalry in football. It hurts to lose.”

Despite all this, Hamilton said one career moment that stands out to him was during his rookie year as a photographer.

“During my first year at KATV, I was given an assignment at Lamar Porter Field in Little Rock,” Hamilton said. “The only thing I knew was it had to do with baseball. As I walked up with my camera, I couldn’t believe it. There was the ‘Say Hey Kid,’ Willie Mays. One of my very first interviews was with the Giants slugger. I rushed home later to grab a photo I had of Mays. I dropped it off at the home of the Little Rock mayor. He agreed to have Mays autograph it for me. One of my all-time favorites.”

Today, when he is not teaching and sharing stories with students, Hamilton works behind the scenes at every sporting event, making sure it hits the air safely. And, for anyone who runs into him, they may get to hear a story of their own.

Full Count: The road to October