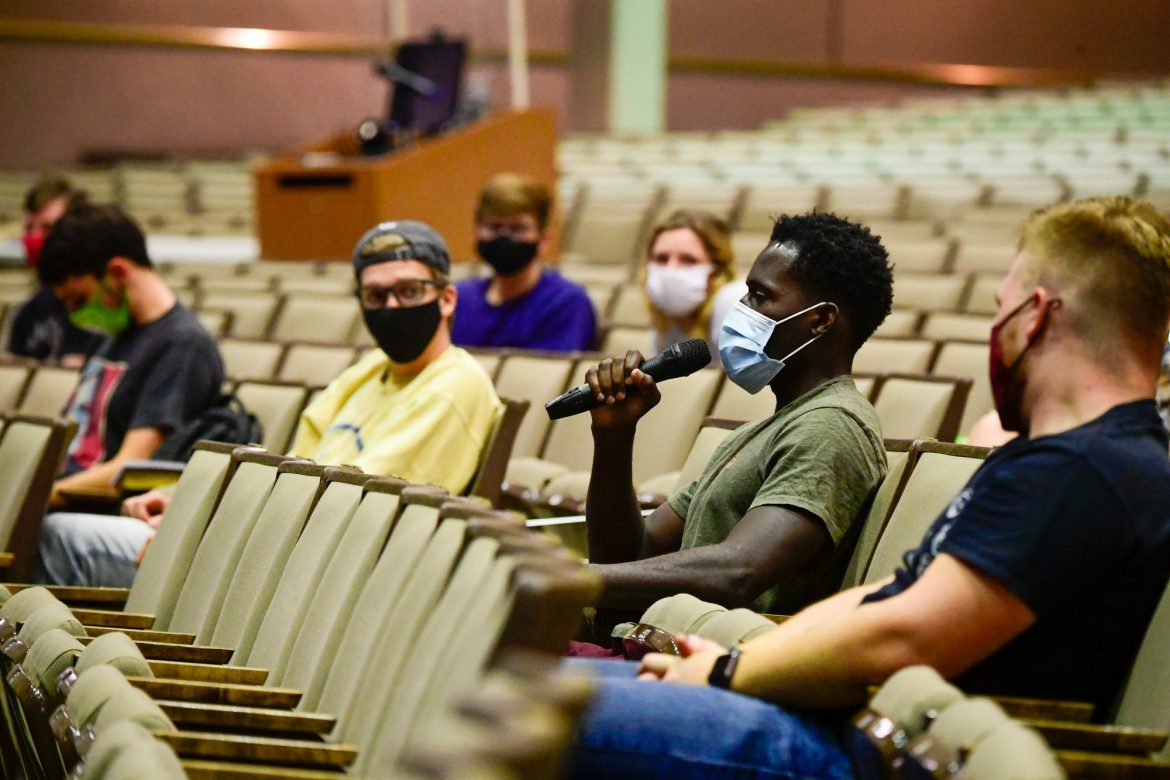 Harding offered the seminar course, Conversations in Cultural Competency: Christian Resilience in a Racist World, for the first time Sept. 10-12. Bible and ministry instructors Jason Darden and Alan Howell led the course, along with several other faculty members from various areas of campus.

This summer, in response to the racial unrest unfolding in the country, professor of Bible and ministry Dr. Ross Cochran brought the idea to Darden to provide resources for students to address racism. The professors soon formed a committee to create a course to equip students to fight injustice and racism and to open conversation surrounding the topics.

“We knew we needed to roll out something quick, because we wanted to hit the ground running when the students came back to campus,” Jessica Berry, admissions counselor for transfer students and multicultural liaison, said. Berry also serves on the diversity consortium, a subcommittee of the diversity committee, and led a discussion about microaggression at the seminar.

Berry said the planning process for the seminar was rigorous, but the committee knew they wanted to find ways to address necessary topics upon students’ return.

The course was split into four sections: history, theology, culture and strategy. Howell said in the early stages of planning, they recognized these categories as key concepts to address.

The seminar began by discussing the history of race in America on Thursday night.

Junior Phallen Reed, who chose to attend the seminar without receiving course credit, said it was interesting to see students, particularly those who were White, who had never heard about many parts of history involving race.

“From the first night, I think I began to hope that people would actually take it seriously and actually try to incorporate some of these things into their lives,” Reed said. “And it was definitely eye opening seeing the responses that people were giving, just from that first night alone.”

For the theology section on Friday night, several Bible professors led a discussion about how the Bible has been used throughout time to justify racism.

“We talked about the uncomfortable truth that the Bible has been used to justify racism and how we need a bigger and better picture of what the Bible is all about,” Howell said.

In the third section covering culture, Howell said they discussed how God works inside different cultures and how everyone is shaped by the culture that raised them.

“You need to approach every culture — every group — as if they’re your own and really treat them as if you want them to be treated with the utmost respect,” Berry said.

The last session on Saturday afternoon addressed strategies to combat racism, including strategies when dealing with trauma, interpersonal racism, microaggressions and white fragility.

Junior Lily Beth Ayers attended the seminar for credit and said she attended in hopes of gaining more skills and exposure to address racism in America.

“What I’ve realized over the past few months is that not saying anything isn’t OK,” Ayers said. “I don’t always know what to say, and I’m scared, but that’s not an option anymore.”

Reed said when combatting racism, simply having conversations is crucial. Reed said it is important to know that conversations about race will probably be uncomfortable, but if both sides show up with a genuine desire to find a solution then it should ultimately lead to progress.

“I really believe that conversations are the way that God changes the world, and they seem small, but Jesus is the conversational word of God made flesh,” Howell said. “God’s not doing a monologue with a microphone from heaven … God’s coming down and talking with us.”

Berry said she is hopeful that the Harding community can make progress in dismantling racism and making the University a space where everyone feels welcome if people make an effort to continue these types of conversations and commit to trying.

“Just like with anything, you gotta crawl before you walk, you gotta fall down a little bit so you can learn what you can do better,” Berry said. “But we’re falling forward — we’re not falling backwards. As long as we’re falling forward and making mistakes and learning from them and trying to grow from them, then Harding can thrive in this area that they’ve always had potential to thrive in.”

Berry said the University is working to make strides in fighting racism, and she welcomes any ideas on how to do so. Berry can be contacted at jnberry@harding.edu. To request access to recordings or resources from this course, contact Darden at djdarden@harding.edu or Howell at ahowell@harding.edu.