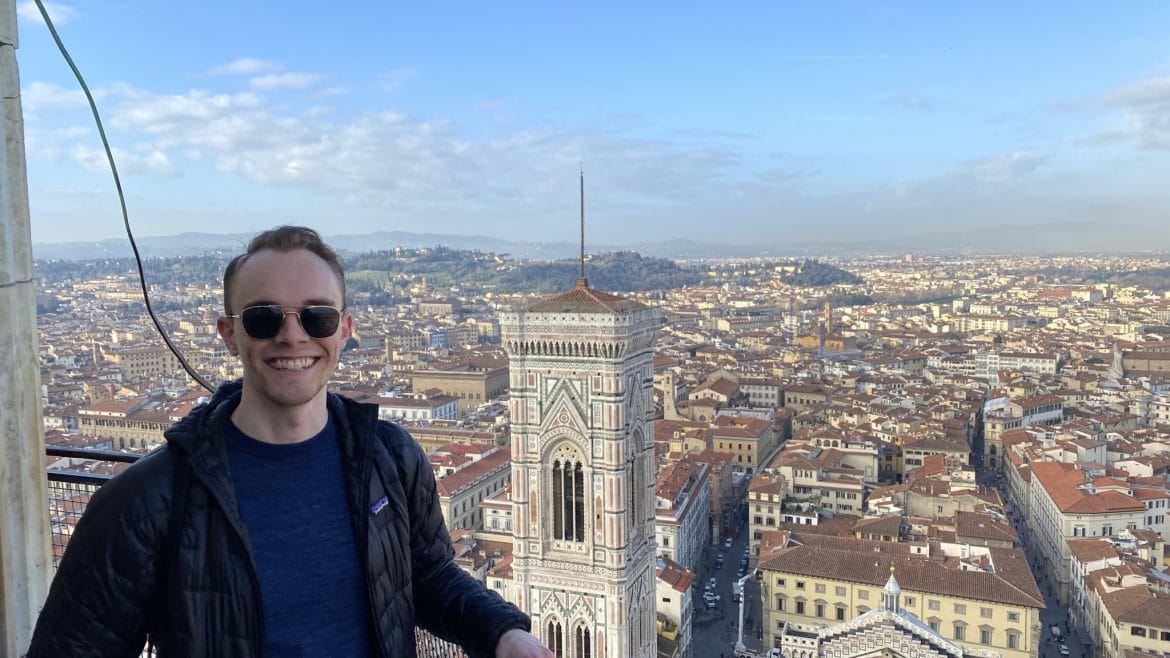 Ethan Brown was working as a registered nurse in the heart and lung transplant intensive care unit at The Mayo Clinic when his life took a dramatic turn. In the fall of 2019, Brown was hired as new assistant director at Harding University in Florence (HUF). Brown began his role this semester, but his time was cut short by the outbreak of the coronavirus in Italy, leaving him with only a few weeks as assistant director.

Brown attended Harding as a first generation college student and graduated with a bachelor of science in nursing degree in 2018. He studied abroad in the HUF program during his time at Harding.

Brown said his favorite part of being assistant director of HUF was being with the students and learning from them; he said he gained a lot by witnessing the talents God had given them. Unfortunately, he only got a few weeks with his first group of students before the decision was made Feb. 26 to shut down the HUF campus.

“To the students whose study abroad trip got cut short, I don’t have words that will suddenly make the situation seem any better,” Brown said. “It is so unfortunate that this happened, but I hope that they will still make the most of this time by being fully present with God, with family and with themselves. Take this time to grow through discomfort, seek new opportunities to learn and pray for a better future. I encourage them to make every effort to travel abroad again once all of this passes.”

Junior Everett Kirkman was a member of the spring 2020 HUF program, and she got to know Brown during her time abroad. Kirkman said her favorite memory with Brown was when he spoke during chapel about how HUF had impacted his life.

“He lived his dream for a while, but soon realized his job wasn’t everything … Through a series of events, he got reconnected with Robbie [Shackelford] and ended up accepting the assistant director position,” Kirkman said. “He left his dream job and moved across the world. On paper, he had the perfect life in Minnesota, but in his heart, he said something wasn’t right … In complete faith, he followed where the Spirit led him.”

Sophomore Ellie Shelton also attended HUF this spring. She recalled that same day in chapel and said she felt inspired by Brown’s story to follow where the Spirit had called him. Shelton said no one knew what to expect from Brown because he had big shoes to fill. Harding alumnus Grant Schol was assistant director for several years before Brown, and he was well known and liked by previous HUF students. Shelton said Brown exceeded her wildest expectations and made every student feel at home in a foreign country.

“I loved that Ethan was always willing to jump in and do whatever we were doing with us, whether that was going to get gelato, singing while someone played the piano or talking about the enneagram with us during tea time,” Shelton said. “He never acts like he is better than anyone.”

Brown is now in Ohio spending time with his family, watching a lot of movies and studying Italian. He accepted an ICU position in New York City to help battle the coronavirus, and he is moving there today for at least a month. Brown will return to the HUF campus to work as assistant director when the pandemic passes.