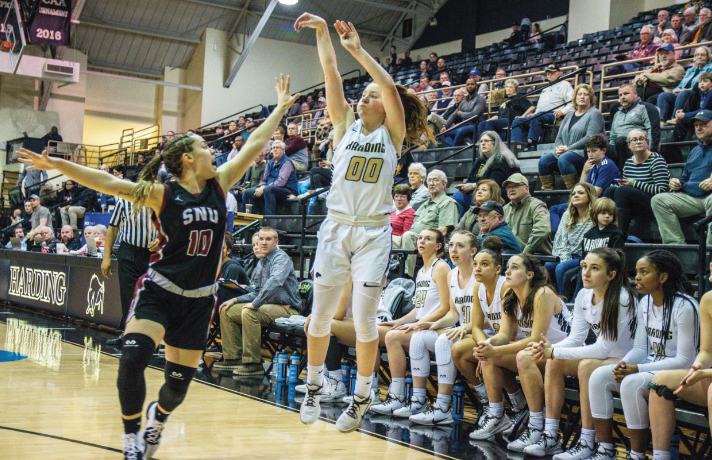 The Lady Bisons basketball team took the number one spot in the Great American Conference (GAC) and clinched a spot in the GAC tournament set to begin Thursday, March 5. With a record of 18-8 in conference games, they hold tightly to their first place standing.

After losing their first two conference games and having two unforeseen injuries in the middle of the season, the Lady Bisons had to fight for their chance to compete in the GAC Tournament.

As players get ready for the tournament, junior guard Carissa Caples said the team had a change of heart after facing the challenges they had, which included two starter players who tore their ACLs and are out for the season.

“Our team has faced a lot of adversity this year, and I think ever since that really hit us hard, we started looking at playing basketball a little differently,” Caples said. “It is a privilege.”

At the same time, she said the team is focused on playing on each other’s strengths and maximizing the different talents they each bring to the court. Senior guard Peyton Padgett said the team has started to focus on themselves and how each player can make the team better.

“Everybody knows what everybody does well,” Padgett said. “So now all you can do is just better yourself, and that will better prepare you for other people — to utilize everyone’s strengths.”

Assistant coach Weston Jameson said as the team prepares for the tournament, they are focusing on staying in the moment and not letting themselves get caught up in predictions.

“It gets really easy to look at where everyone’s at in the standings and how things could finish up, so I think the biggest thing is just staying in the moment, taking it one day at a time and figuring out, even in late February, how we can improve,” Jameson said. “You can’t improve necessarily in big ways, but just finding little things that we can improve on every day and trying to play our best basketball at the end of the year.”

Jameson and Padgett both said there is not much separation between the conference teams this year. It is hard to tell who will come out on top.

“Normally there’s one or two teams that have fully separated themselves from everybody else, and you can tell they’re going to get first or second,” Padgett said. “But this year there’s, like, I’d say five teams that are in the running, and so it’s way more competitive.”