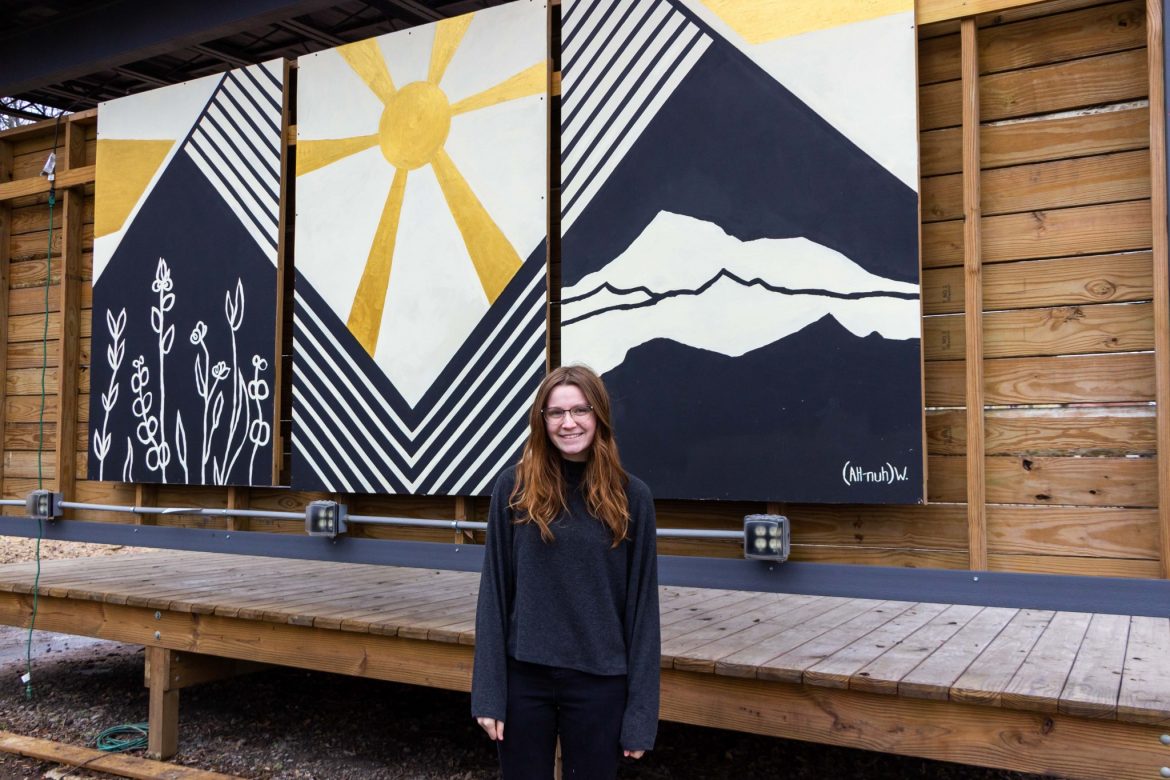 The artwork of two Harding students hang on display at the Midnight Oil Coffeehouse Spring 2020. Freshman Anna Westbrook painted the stylized mountain mural that hung on the back of the Nita Cochran Stage, welcoming students walking from campus to the coffeehouse, and senior Ellie Turner decorated the interior beige walls with original art ranging from a chilled alligators to patriotic presidents prints.

The work of local and student artists added to the ambience of the coffeehouse. Eric Mount, Midnight Oil manager, said he looked for artists that had good, quality artwork and enough pieces to cover the walls. However, he said he did not want set parameters on their creativity.

“If you’re going to say you embrace creativity, you’re kind of taking a chance, right?” Mount said. “Because if you’re accepting the artist and saying, ‘We want to display what you have,’ you don’t want to then say, ‘Now make it exactly like this.’”

Mount contacted Turner about displaying artwork in the coffeehouse after seeing T-shirt designs she created for women’s social club Zeta Rho. Turner began creating prints and paintings over winter break to fill the walls, then hung the artwork in Midnight Oil the weekend before spring semester began. Though she was nervous at first, Turner said the experience has been affirming.

“When you’ve seen other artists in the past and now it’s your art, it’s kind of like … right after I put it all up, I felt kind of shy about it,” Turner said. “Everybody’s getting to see it up there.”

Westbrook said she approached Mount about the opportunity of sharing her artwork. With acrylic paint from Walmart and birch flooring from Lowe’s, Westbrook created three individual paintings that harmonized into a single mural for the vacant back of the stage. Her experience with art began in childhood, Westbrook said, and her artistic style began focusing on texture in high school. She said the mountains she saw while traveling during summers with her family inspired the paintings.

“I love textures and just like nature, so there’s a lot of lines on it,” Westbrook said. “I kind of like the contemporary style — incorporating texture with more natural forms. And so I do like it to be streamlined to some extent, but I like the free form.”

Westbrook’s mural will remain up until the end of the spring semester, but Turner’s artwork will be removed in early April to host a display from an art class taught by Tessa Davidson.

Hands on a hardbody opening weekend