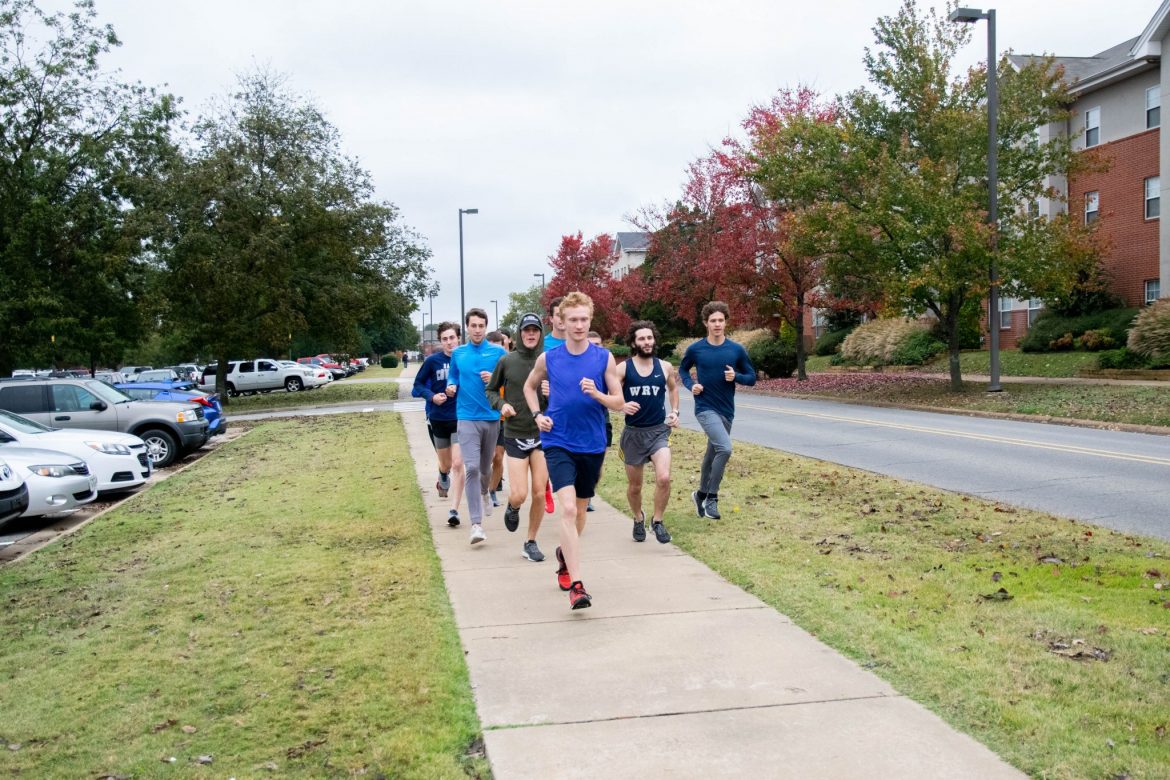 With focused determination, sophomore Dylan Douglas crossed the finish line first on Oct. 26 at the Great American Conference (GAC) cross-country championship, finishing the 8K race with a time of 25:16.7.
The Hardings men’s team barely lost out to Oklahoma Baptist University after a tie-breaker put the latter team ahead by two points. The women’s team finished third, and both teams will advance to the regional championship.
According to Head Coach Don Hood, there were concerns going into Saturday that the damp conditions would be too challenging. He said the teams ran well, though, and he was pleased with the overall outcome, despite losing the team title.
“On the men’s side, it was kind of a toss up,” Hood said. “We were picked fourth coming in, but I knew it was going to be close … They were just a little better than us that day. I think if we had that race five more times, it would be a different result every time. Some them, some us.”
Hood said Douglas had been inching his way closer to the second place finisher from Southern Arkansas University throughout the season, slowly closing the gap between them with each race they competed in together. There was no better time for Douglas to finally reverse that placement than the GAC Championship.
“With a mile to go, there were about four of them still in the hunt,” Hood said. “[Douglas] just put the hammer down and ran away with it. It was really fun to watch him do that.”
Team-focused and humble, Douglas said he went into the race with the team results in mind. While he wished they had come out with the win, he said he recognizes the potential for future victories.
“Crossing the finish line, I had come into the race with aspirations to help my team try and get the win,” Douglas said. “Unfortunately we didn’t get that, but that’s totally OK. We’re a very young team, so I was still very proud of how we finished.”
Both the men’s and women’s cross-country teams put in hundreds of miles of practice leading up to the end of the season, preparing physically. Douglas said in addition to the physical training, however, there is also a mental strength important to distance running.
Freshman Jackson Pruim completed his first GAC championship in 11th place at 26:09.6. He agreed that mental preparation is important to a successful season, as well as a postive team dynamic.
“The team dynamics have been incredible this year for a team that is so young,” Pruim said. “It is fun to grow with these guys and create a family-like atmosphere.”
Hood is wrapping up his first cross-country season as Harding’s head coach. Douglas said he felt welcomed by the team from the very beginning, and Douglas said Hood has been great for the team and their development.
Douglas said Hood’s coaching wisdom helped propel him to victory last Saturday.
“The things [Coach Hood] tells us for most races is ‘easy and relaxed, relaxed but effortless,’” Douglas said. “Obviously, it seems like those things kind of contrast when it comes to running. There’s a very fine line for distance running between effortlessness and straining. I had to find that balance.”
The teams will compete at the NCAA Division II Regional championship Nov. 9 in Joplin, Missouri, with the top three teams advancing from there to nationals. Hood said he thinks both the men and women have a chance to place within the top 10 if they run well.
With Douglas finishing in first as an individual and a young team with a lot of promise, however, there is a lot to look forward to.
“It would have been really nice to win, but to know that we’re in that range, that we’re fighting for a title, with what should be basically our whole team coming back next year, tells me we’ve got a good chance to do some good things in the future,” Hood said. “I was really pleased with their effort and how they performed under pressure like that for the first time.”