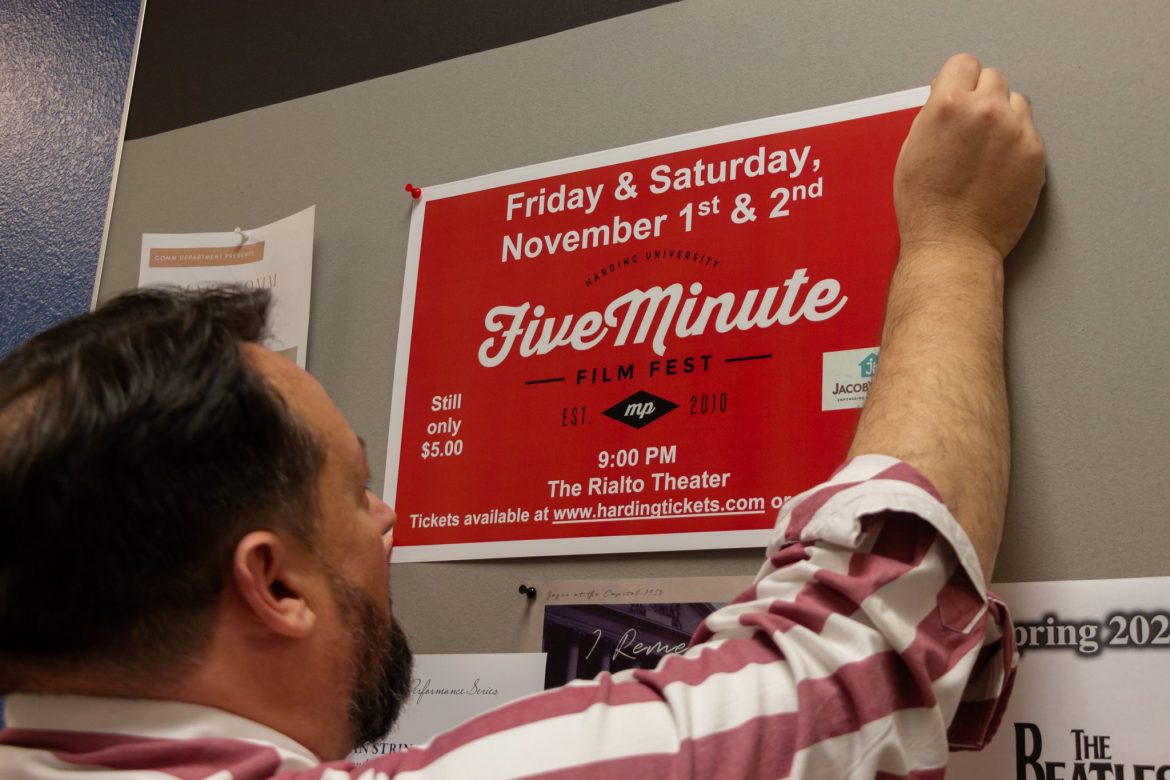 The Five Minute Film Festival, a contest that encourages students to channel their creativity, will begin at the Rialto Theater in Searcy tonight. This event encourages Harding students to channel their creativity and step outside their comfort zone.
Alumnus Bronson Crabtree directed “The Bench,” which was named “Best Film” at the 2018 Five Minute Film Festival. Crabtree said creating a short film goes way beyond what you see on the screen.
“There is a lot that goes into creating a short film, but on the creative side, at least for me, I started with a vague idea of what I wanted to make,” Crabtree said. “I then figured out the tone of the film I wanted to produce and then began really fleshing out all of the details like color, music, etc.”
For students interested in being exposed to film, Dr. Amy Qualls, associate professor of English, teaches documentary film, a new course that talks about the ability to shape a true story into the representation of truth. Qualls encouraged students who want to make a career out of filmmaking to take advantage of the Five Minute Film Festival because of how important storytelling is in the corporate world.
“If you’re a storyteller, and you understand the story and how to reach people, and you can do that very succinctly through film, that’s a huge advantage,” Qualls said. “Film is often the first thing that a potential client, customer or supporter will actually see. So film has become sort of the first impression for a lot of different organizations.”
Whether the Five Minute Film Festival is something fun to create with friends or an actual stepping stone to pursuing a dream, Crabtree said for him, creating “The Bench” led to much more than just entering a contest.
“After the HU Film Fest, I had no intentions of doing anything else with the film,” Crabtree said. “However, I saw a local film fest in Little Rock and decided on a whim to enter ‘The Bench,’” Crabtree said. “A few weeks later I received an acceptance letter, and I got to participate in an Arkansas Cinema Society film festival featuring Oscar-winning producers and directors. It was an honor sharing the stage with both beginners and top-dog filmmakers.”
Senior Caleb Smiley has participated in the film festival since 2016, and he said there is a mixture of feelings as he prepares to enter his final Harding Five Minute Film Festival. As Smiley debuts a sequel film to his entry in last year’s contest, he reflects on how the experiences have helped him grow as a filmmaker.
“In all my years going to the festival, it’s always been fun to show my films to everyone and watch their reactions, but it has also been great to receive the feedback that I have from both students and professors,” Smiley said. “It has helped me improve and has inspired me to make better films each year.”
The Five Minute Film Festival begins tonight at the Rialto Theater at 9. The event is open to the public for $5, but seating is limited.