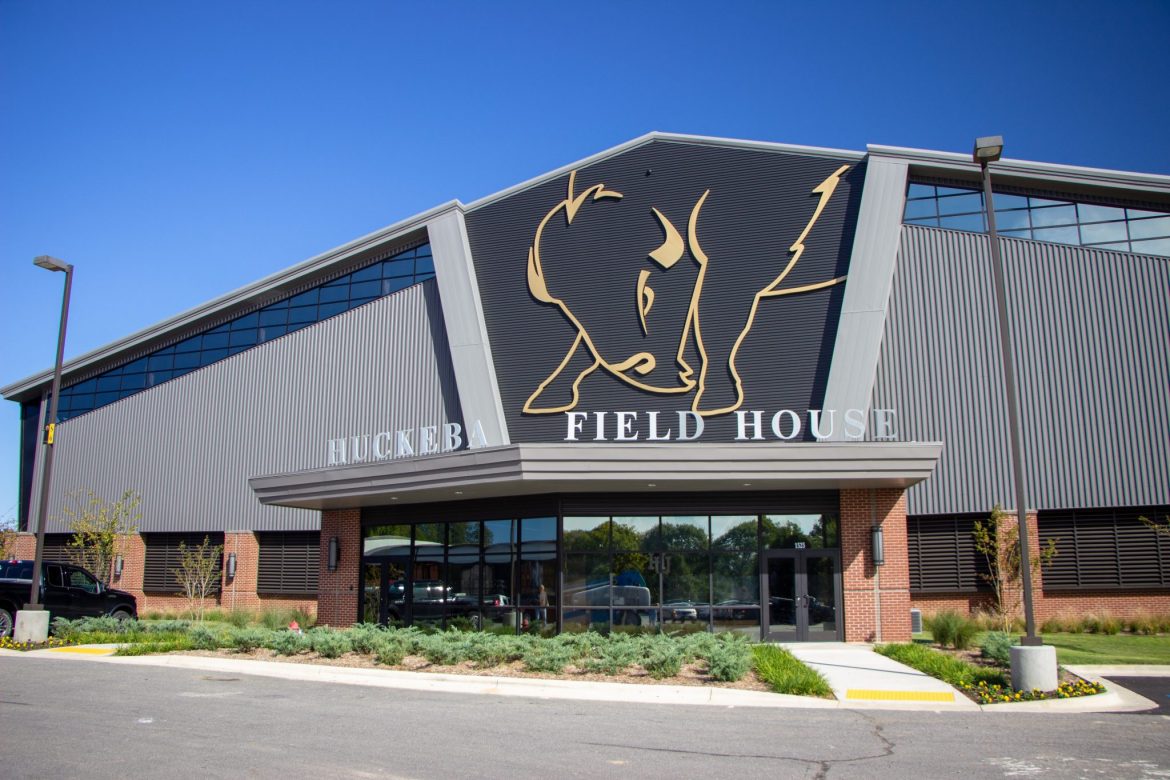 After winning a Division II National Championship, having a 69-40 coaching record and earning a Gulf South Conference Coach of the Year award, former Harding football head coach Ronnie Huckeba passed the hat to former Bison football player and graduate assistant Paul Simmons in 2017. To honor Huckeba and his legacy, current and former players, alumni and friends of the Harding football program fully funded a field house named after the former head coach set to be formally dedicated this weekend.
The field house includes a 77,146-square-foot facility, with a 133-yard Hellas turf field and large lobby, complete with photographs and displays that tell the story and history of Bison football.
Athletic director Jeff Morgan was asked in an interview for the Harding sports page about the stadium while it was being constructed in February. He said the field house was a great way to commemorate the Huckeba legacy.
“Naming the facility after Coach Huckeba is a great tribute to him and the investment and influence he has had on Bison football for most of his life,” Morgan said. “Being a player, assistant coach and head coach covers many years of great service and lifelong work. Coach Huckeba has been a great teacher, mentor and coach for many. This is a great way to honor him and also a way to honor all his fellow teammates, coaches and players through the years.”
Current Head Football Coach Paul Simmons wasn’t just a player for Huckeba, but also worked for him as a graduate assistant. Simmons loved the fire and passion Huckeba had, not only for the team, but for Christ.
“It was very important to him to model Christ,” Simmons said. “He wanted to teach things such as how a man should treat his wife and how a man should father his children. He was intentional in teaching us this. The biggest and most important thing for him was to be a man of God.”
Huckeba now lives in northwest Arkansas, and said he is happy to be back on Harding’s campus for Homecoming weekend. When he found out earlier in the year that the field house was going to be dedicated to him, he said he felt honored.
“I feel very humbled and grateful,” Huckeba said. “I am sure most people that have been honored in such a way feel undeserving of being blessed like this, and I would say that this describes me for sure. Bottom line is that it is a tremendous honor for me and my family and I am very, very thankful.”