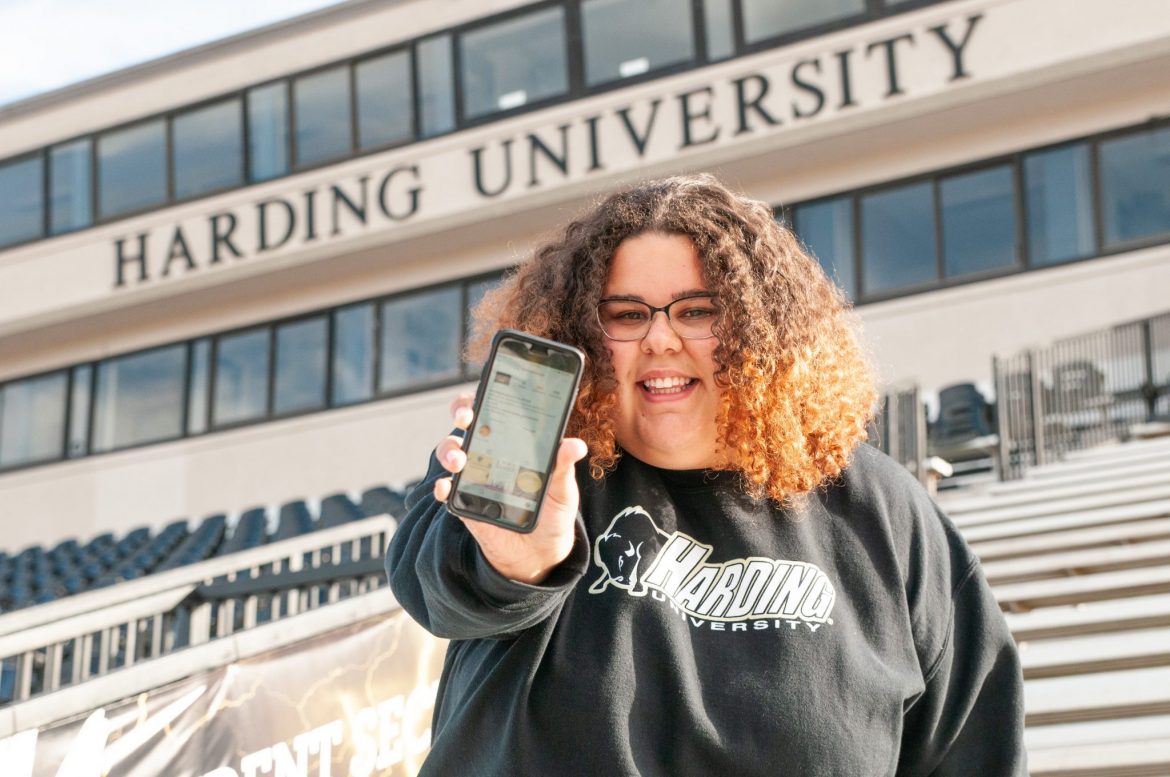 Freshman Amanda Brown plans to change the game when it comes to supporting Harding sports. Within the first few weeks of her time at Harding, Brown took the lead in creating an Instagram page to spread excitement for Harding sports events. Brown announces themes for the student section at football games on the @HUBisonBoom page, which has been recognized by Harding’s digital media director, students and football players.
Brown got the idea to increase student attendance and spirit at football games when she went to the Code Black Pep Rally Sept. 12. At the pep rally, senior Lew Knapp was having a dance-off with a freshman football player when Brown stepped in.
“Suddenly she came out of nowhere and killed it,” Knapp said. “Her and I then proceeded to dance like no other.”
After Brown showed her spirit at the pep rally, players on the Lady Bisons basketball team approached her and said her spirit was needed in the stands. Brown wanted to show her support this semester, and knowing there needed to be greater student involvement at football games, she decided to take her talent straight to the stadium.
Senior defensive lineman Dylan Hampton said players notice excitement from the stands.
“Usually when [the students] are all together, we can hear it,” Hampton said.
When Brown went to football games at the beginning of the semester, she noticed a lack of student attendance and spirit. Brown said she used to be involved in sports, so she knows the importance of cheering for classmates. For her, building the Bison Boom student section became an important project.
“When I came to Harding, I wanted to make my mark,” Brown said. “I thought this would be a great way, and just getting to know people. And I love athletes — I used to be an athlete; I was in sports. I understand being cheerful and being proud and cheering on your classmates. So I just wanted to bring that here.”
The Bison Boom Instagram has gained more than 250 followers since it was created Sept. 17. Brown posts game times, theme nights and giveaways on the page. The account caught the attention of Hannah Owens, Harding’s director of digital media.
When Owens learned about Brown’s Instagram account and student section leadership, she scheduled a meeting with her. When they met, Owens saw that Brown had the skill set, talent and fresh perspective required to engage student involvement.
“It’s organic,” Owens said. “It’s just more natural when other students are promoting something or rallying around something. That’s what makes it cool, or that’s what makes it good to jump on — more so than the University saying, ‘Hey, this is cool.’”
Brown said she plans to continue to promote student sections at other sporting events in semesters to come. Follow @HUBisonBoom for updates.