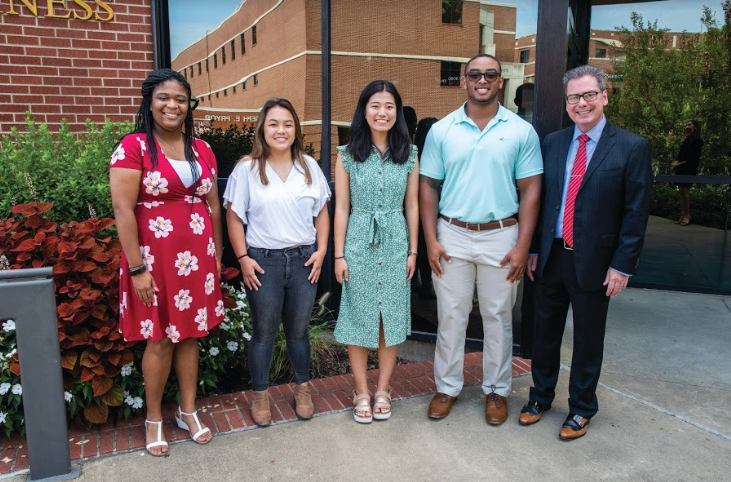 As jury selection continued on Friday, Sept. 13, in the Dallas area for the charge of Amber Guyger, who is accused of killing Harding alumnus Botham Jean in 2018, Harding sought to commemorate Jean’s life by granting four students the Botham Jean Business Scholarship for the first time.

According to United Press International Inc., State District Judge Tammy Kemp finalized the jury on Sept. 14. Nearly 400 potential jurors arrived for interviews Friday morning, but both media coverage and the nature of the case complicated the process of seating an impartial jury.

On Harding’s campus, four students have become part of the story following Jean’s death. Freshman Courtney Porter, sophomore Brittany Tate, junior Antonio Montez and senior Yui Kondo are the first recipients of the scholarship, which selected College of Business Administration students who are leaders in their community and members of a historically under-represented population.

“It means a lot because this scholarship is for historically under-represented populations,” Tate said “So just to be able to get that recognition in the Business Department, where it’s predominantly white males … To see [Jean] who made it through the business program and was successful and was able to represent himself well … is really awesome.”

PricewaterhouseCoopers (PwC), Jean’s employer at the time of his death, initially established the scholarship fund with a $50,000 gift. The combined contributions of PwC staff, partners and the PwC Matching Gift Program grew the scholarship to more than $600,000 as of Sept. 1.

PwC’s managing partner for Greater Texas, Scott Moore, said, “Bo was a dear friend and colleague to many of us here in Dallas … This fund is a tangible expression of Bo’s compassion, caring and generosity that will live on for years to come.”

Though Guyger’s trial process continues to move forward, complications may delay the trial. According to DMN, Guyger’s attorneys asked to move the trial to another county to combat negative media coverage of Guyger in the Dallas area. Some DMN analysts say the alternate counties are more likely to yield a whiter and more conservative jury.

The outcome of Guyger’s trial remains to be seen, but for Porter, Tate, Montez, and Kondo, Jean’s legacy is already evident.

“This scholarship is especially meaningful to Harding because it honors Botham’s life and continues his legacy at the University, ” Bryan Burks said, vice president of university advancement. “In telling his story, we challenge recipients to be great students and campus leaders, and most importantly, to follow Christ with their hearts. While Botham’s life was cut short, he is remembered through this scholarship that will continue to impact the lives of our students for years to come.”