The NFL will kickoff its 100th season Sept. 5 with a game between its two oldest teams, the Green Bay Packers and the Chicago Bears . With 100 years of football comes 100 years of tradition, spawning everything from lifelong rivalries to crowds of people wearing big cheese on their heads.
Tradition makes us do funny things. For example, on Sept. 9, I will be dressed in my unwashed Drew Brees jersey with a wooden spoon in my knee-high lucky green socks. This is how I dress every day that the Saints play in their regular season. Despite the looks I get, it’s tradition.
So what makes a person do something like this? Why risk embarrassment for something like a football game? I’ll tell you why I do it. I do it because of my dad. My dad and I really didn’t connect when I was younger since he was a huge football nerd, and I was an 8 year old addicted to video games. One day our two worlds collided when he brought home a football video game, and we immediately started bonding. He told me what teams to choose and what plays would work, and I taught him how to work the controls. But it stopped there. He wouldn’t pick up a controller to play any other game, and I didn’t really care about football.
Then the day came when I was actually at a college football game, and my dad was talking to me about what was going on, and I was genuinely interested. I was learning so many things, and the game started becoming increasingly more interesting. After an hour of predicting plays and shouting, “That’s another Warhawk, third down!” our team walked away with a loss, but I didn’t. I won that day because that was one of the closest moments that I had with my dad.
Just as I was becoming interested in football, it seemed as though life was trying to get me down. My favorite team, the New Orleans Saints, wasn’t the team that it was today. I watched them suffer loss after loss. After several disheartening seasons, my newfound passion was starting to dwindle until one special day. I was sitting on my couch watching the Saints struggle against the South Carolina Panthers and found a wooden spoon lying in front of me. Since we were down by several points, I decided to pick it up and distract myself instead of enduring the agony of another loss. Mere seconds after picking up my spoon, the sports announcer shouted, “Interception! They are going to take it all the way!” The Saints had intercepted the ball and ran it back for a touchdown — one of many scored shortly thereafter to miraculously win the game. The Saints ended up pulling off an incredible season, and I held my spoon all the way through it.
As the years passed, I donned a Drew Brees jersey and a pair of lucky socks to help “ensure” the Saints’ victory, but my favorite part of my traditions wasn’t the stylish apparel, but it was sitting on the couch with my dad knowing that this was something that we shared. The real tradition was him calming me down when the game was getting too close. It was his nonstop laughter at my reactions when our rivals, the Atlanta Falcons, scored. It was the ability to sit in absolute silence and know exactly what we both were thinking, which was usually an incorrect prediction of the next play.
Being in college, I haven’t had my dad right there beside me on the couch, but when I wear my game day attire, I know deep in my heart that he is watching miles away in his matching football jersey. So, despite the weird glances and the scattered comments, I wear my spoon in my sock with pride because it’s not just some old tradition, it’s my tradition.
Traditions don’t have to be decades old nor do they have to be unchangeable. With new families, you either create your own traditions or mix the ones that you already have together. It’s a beautiful thing when multiple traditions combine into one or when new ones are made because that’s what they are about. They are about community and shared memories. So, don’t be afraid to start a tradition and don’t be afraid when one changes. Celebrate something goofy, wear something weird on Wednesdays, or wear a spoon in your sock. Traditions reflect growth and cherished memories, something that I think we all need in our lives. Go Saints!

Full Count: The road to October 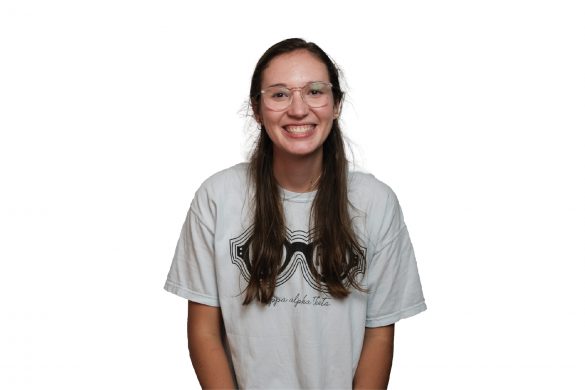