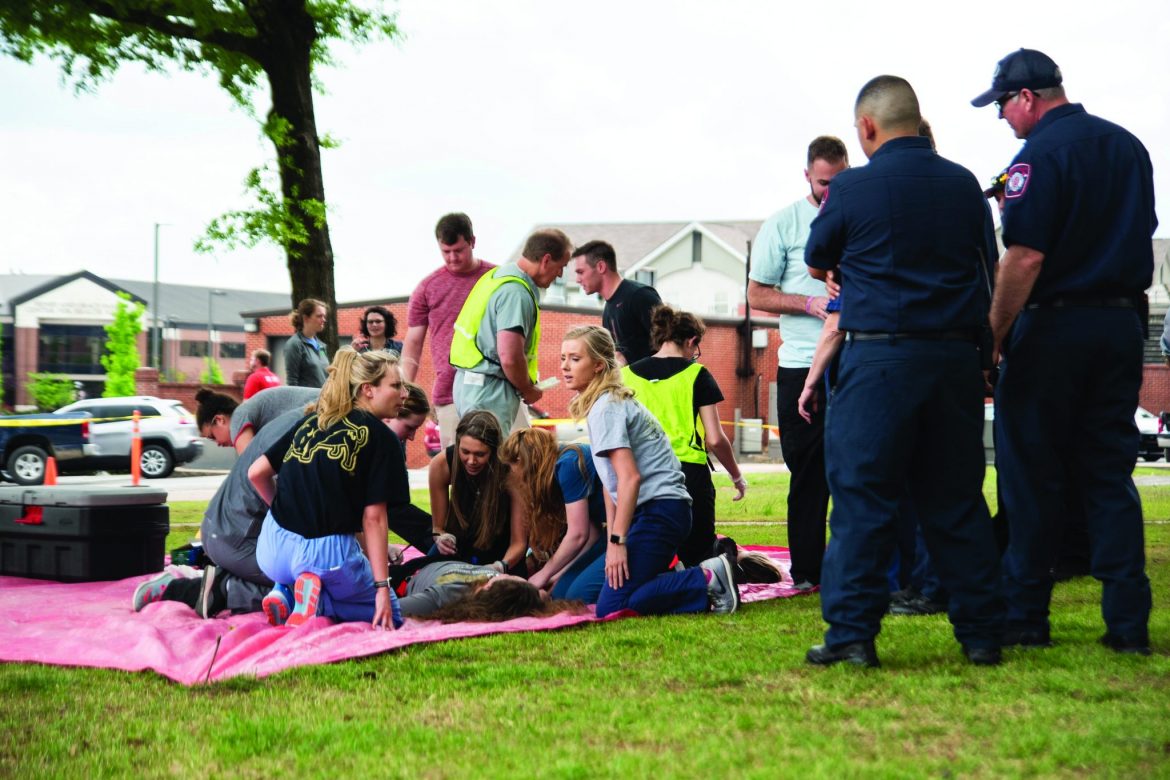 Students from the College of Allied Health simulate a triage on the lawn in front of the Ezell Building on April 24 during an active shooter drill. Members from the Searcy fire department and police department also participated in the simulation. | Photo by Emily Griffin

The Department of Public Safety held an emergency disaster drill on campus on April 24 with campus and community officials and first responders to simulate an active shooter situation.

This year’s drill involved a few new aspects, including a campus-wide lockdown, according to Craig Russell, director of Public Safety.

Russell said Public Safety received feedback that some students received an email but not a phone call or text message warning of the lockdown drill, and the following day, he contacted Information Technology Services to ask for help to solve the problem.

Kevin Davis, assistant director of Public Safety, typically does a comprehensive review of the emergency management plan every summer.

“As far as specific protocols … everything that we’ve got in place worked, and that’s one of the reasons why we conduct the drill — just to make sure we don’t need to make any tweaks,” Davis said.“It all worked as it was supposed to,so that’s good.”

Around 200 people get involved in a drill like this, including people both inside and outside of Harding, according to Russell. The Searcy police department, fire department, hospital and emergency medical services participate in the annual drill. More recently, a Life Flight helicopter has been added to the rotation. Inside of Harding, Public Safety, Information Technology Services, Physical Resources, University Communications and Marketing, the Office of Human Resources and the Business Office engage in the simulation. Some participants in the College of Allied Health played roles as victims and responders.

“It’s an exercise where those that would really respond in an emergency on and off campus get involved, but we also use it as an academic exercise,” Russell said.

Kelley is a member of the Harding Emergency Management Committee, and she coordinates the academic departments.

“They’re going to have to work together in the event of an actual disaster, and so it’s important to practice that together and learn,” Kelley said.

Senior nursing major Ashley Collins played the role of a victim with a gunshot wound, and she said she started out in the Ezell Building, and the police escorted she and other victims out of the building to the triage area.

“They did the gunshots and everything inside,”Collins said. “I knew it wasn’t real, but it was kind of scary just to be in there and hear all the screaming.”

She started out on the yellow tarp, and then her simulated condition grew more severe, so she moved to the red tarp. Collins said the simulated victims were given slips of paper with their vital signs and how they would change over the course of the simulation.

Senior nursing major Tori Hurt played the role of a nurse to help with the simulated triaging and assessed the patients as they left the scene. Hurt worked on the red tarp, which was the designated area for emergency care and severely wounded patients who needed transported to the hospital as soon as possible.The black tarp meant deceased patients,the green tarp meant walking wounded and the yellow tarp meant injuries that could wait before going to the hospital.

“It’s a great experience and helps us as a Harding community,” Hurt said. “We haven’t had this scenario before, and so that way, we can better prepare for that in the future.”

There are two phases to the drill, according to Jana Rucker, vice president of university communication and enrollment. The first phase continues as long as there is an active threat, and once the area is secure, phase two begins.

“This is the first time we’ve done anything of this scale,” Rucker said. “Unfortunately, it’s relevant. … We all want to feel that we’re prepared.”

Harding held the first emergency disaster drill in spring 2002 and continued every year since. According to Rucker, other organizations and universities send representatives to Harding to observe and learn from the drill.

“We prepare for the worst and pray for the best,” Rucker said. “We hope we never have to do it, but there’s also some comfort in saying, ‘I know what I would do.’”

Uplift camp inspires some to return