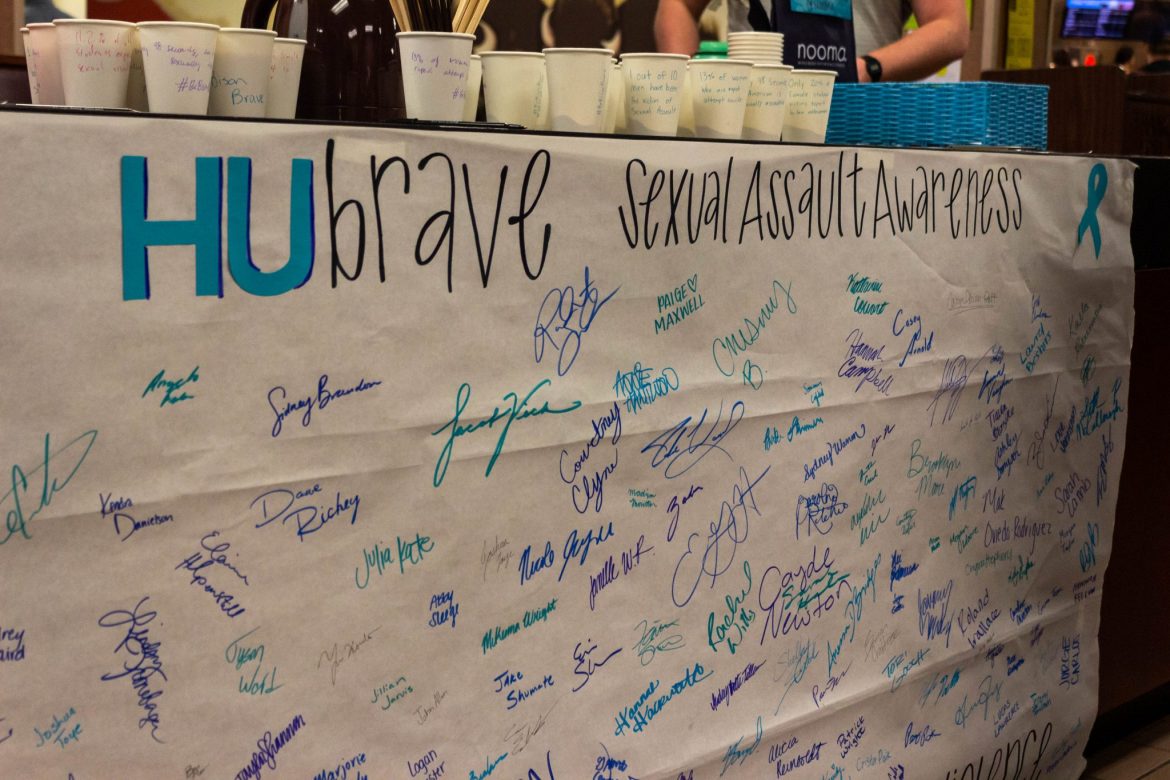 April is sexual assault awareness month, and HUbrave is taking the opportunity of increased awareness to further their campaign against abuse and assault by giving students opportunities to be involved in the fight.

Every year for a week or two during April, HUbrave sets up a booth in the student center to offer information, activities and prizes. Last week, they held drawings for gift cards, vouchers and other prizes sponsored by local businesses who support their cause. They also plan to spread facts about sexual assault in ways like writing statistics on Kibo Midnight Oil Coffee House coffee cups.

Senior Paige Maxwell, president of HUbrave, said one way students can get involved this month is to buy stickers or participate in a Tacos 4 Life fundraiser on April 24.

“Tacos 4 Life will be giving us 20 percent of their proceeds from 5 – 9 p.m.,” Maxwell said. “One hundred percent of those funds are going to be donated to the women’s domestic violence shelter Hope Cottage. It’s a great way for students to participate in sexual assault awareness month and to support a worthy cause.”

April 24 is also recognized worldwide as Denim Day. Denim Day began in 1998, when a case of rape was dismissed by the Italian Supreme Court, who said that the girl’s tight jeans implied consent, as she must have assisted in their removal. The next day, all women employed in the Italian Parliament came to work wearing jeans in support of the victim.

“Faculty is usually only allowed to wear jeans on Friday,” O’Brian said. “So the fundraiser we’re doing is that faculty will pay $5 to wear jeans on Denim Day, which is a Wednesday, and those proceeds will go toward Maple House.”

O’Brian said all students are encouraged to wear jeans as well on April 24 to help raise awareness for sexual assault. Students are also welcome to attend the last meeting this semester for HUbrave on April 23.

“Some students think they have to be a survivor to participate in HUbrave, but that’s not the case,” O’Brian said. “HUbrave is about spreading education and awareness, and anyone who has a heart for that cause is welcome.”

Alternately, students who are assault survivors and who are searching for counseling and community are welcome to O’Brian’s SASSY (Sexual Assault Surviving Sisters You-nited) group. SASSY is meant to be a safe space for survivors and a place of healing for those who share the experience of being assault survivors.

Senior Sarah Brister, communications director for HUbrave, said there is a great deal of importance for Harding students to show support and raise awareness for sexual assault.

“All students should be educated on what sexual assault is and how it affects people around us,” Brister said. “Everyone knows someone who has been affected, whether they are aware of it or not. As a student body, we need to approach awareness holistically and show our support. It’s so important to do our best to erase the stigma surrounding sexual assault and to show God’s love to survivors.”