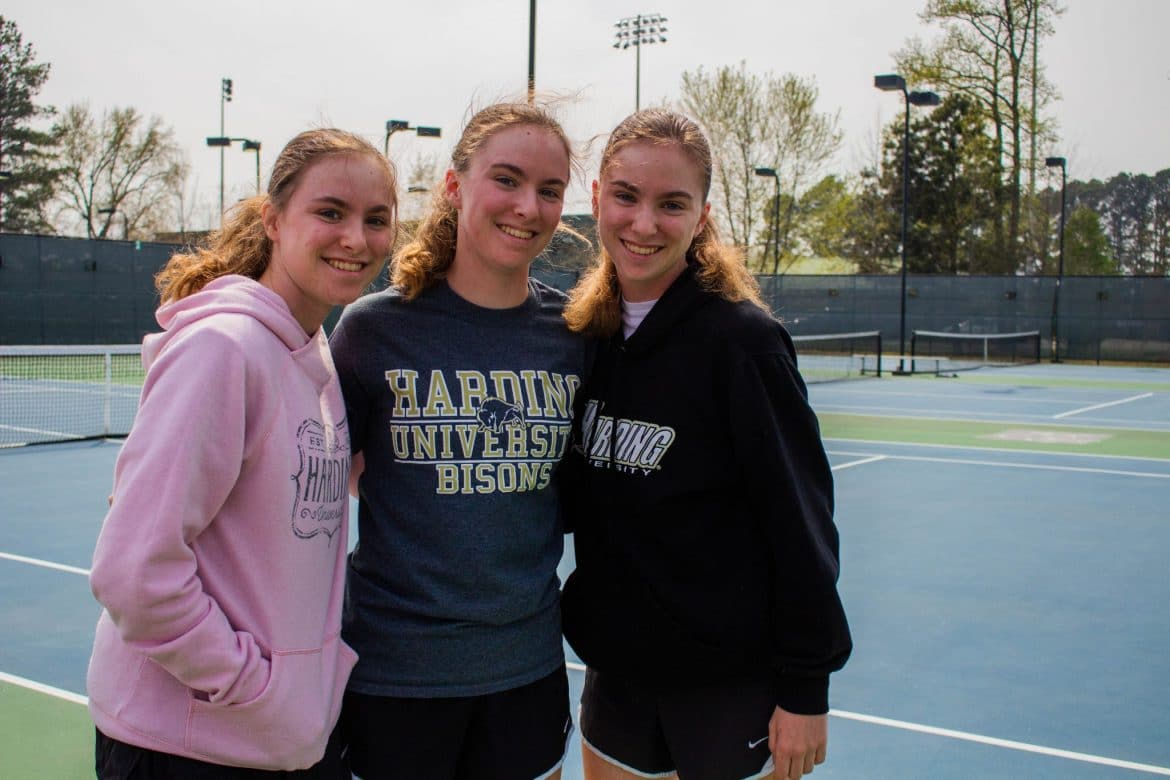 For the last nine years, the Carpenter triplets have gone to practices, matches and tournaments together. Now, their journey has made its way to Harding, where the sisters each feature prominently on the Lady Bisons tennis roster.

The three started playing tennis together at the age of 10. Graduating from an online school, Allison, Emily and Lindy played at the John Newcombe Tennis Ranch, a premiere tennis academy in New Braunfels, Texas.

Head Tennis Coach David Redding recalled that during the fall of their senior year of high school when they were visiting Harding, they told him they wanted to go to school together.

“So right then and there I told them I would love to have all three of them, and they would really help our program and they made a verbal commitment,” Redding said. “I was very, very pleased to be able to get all three of them at the same time. That is just unheard of. You hardly even see twins go to the same place and play the same sport. But with triplets, I just do not know where you would have triplets play at the same sport, the same school.”

The Carpenters said having all three together has made the transition to college much more enjoyable, both on and off the court. Lindy said having her sisters with her throughout this school year has been helpful. Off the court, she said it is nice for all three of them to experience freshman year together.

“Especially in the beginning, we did not really know very many people,” Lindy said. “So, you already had somebody that was also going through whatever you were, like being new here and everything. And then playing tennis, I guess because we have grown up doing it together, we know what it is like, especially if you are having a bad day and we can always be there for each other.”

The sisters agreed that even though they are all competing on the same team, it has never been about competition with one another, but more about helping each other practice and improve their game.

Lindy said that while having her sisters on the team does not affect her play, she thinks it is fun just having them there. Emily added that as roommates and teammates, they always have someone to practice with.

“On the weekend, if I need to hit, I just ask them because they’re right there,” Emily said. “And then we sort of know how we play, so we know if it is off, I can say, ‘Hey, something is wrong with your shot.’ Then I can ask for advice if they see something.”

Women’s Tennis Student Assistant Coach Brandon Hogland said an advantage of having triplets on the team is that their play is very consistent with each other, so they always know what to expect from each of them during practices or matches.

Redding said the team’s dynamic has changed, which can be partially accredited to the Carpenters and their presence on the team.

“They are very smart so it changes the grade point average of the team for sure,” Redding said. “They are all very disciplined players and they bring a very strong work ethic with them. I would say that the dynamic of the team has changed this year, and they are a part of that.”

Emily and Lindy, management majors, and Allison, an electronic media production major, have not only loved having each other as teammates and roommates, but classmates too. As incoming freshmen, college was intimidating, but with similar classes, the trio has been able to study together as well, according to Allison.

Hogland and Redding agreed that the Carpenters are very solid on the court but still have room to grow. Redding added that they are very disciplined, and he is hoping to be able to push them out of their comfort zones in the coming seasons.