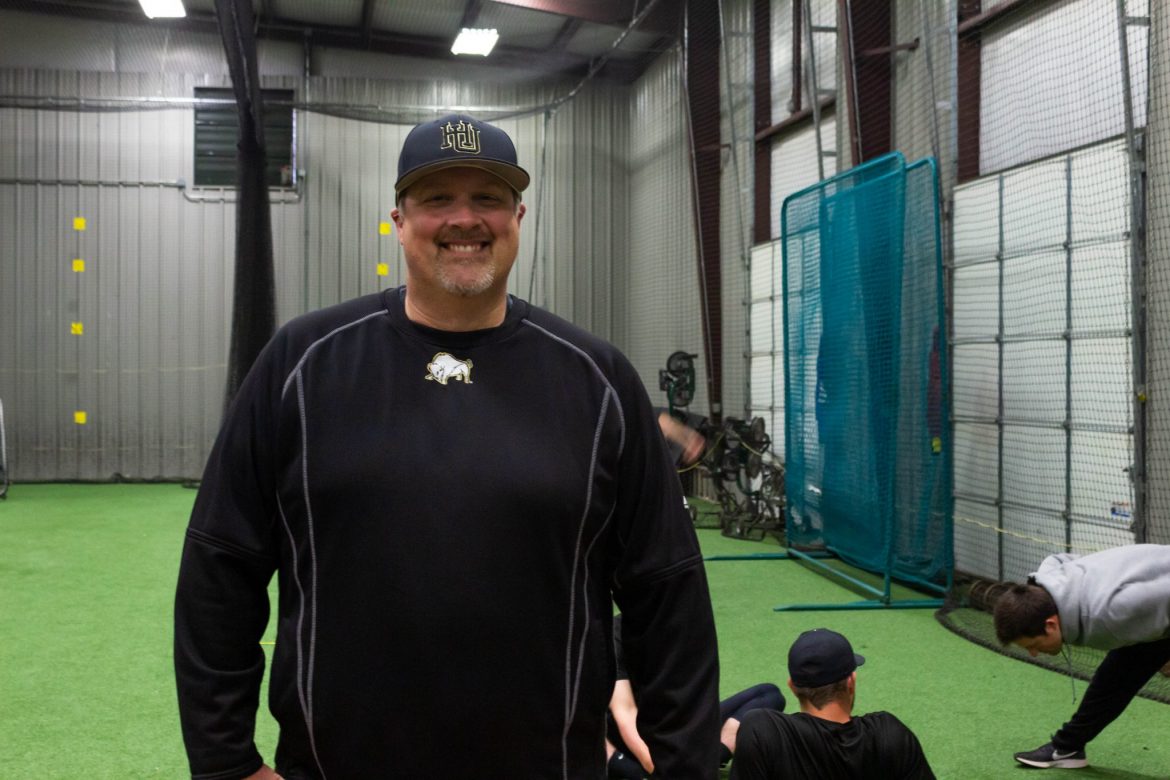 On March 20, Harding Head Baseball Coach Patrick McGaha earned his 500th career win as a head coach when the Bisons defeated Union University 10-9 in 12 innings. The milestone victory for McGaha was also one of his boldest since taking over as coach in 2005.

Harding held a three-run lead heading into the bottom of the ninth inning before Union scored three runs on four hits.

After two scoreless innings, Harding found themselves with runners on first and third base with two outs. That was when McGaha and assistant coach Andy Schatzley decided to make something happen on the base paths.

Junior infielder Connor Kelly ran halfway between first and second and stopped, forcing the Union pitcher to throw the ball to second and catch Kelly in a rundown. As Kelly found himself in a pickle, junior infielder Luke Van Dover broke for the plate and stole home to score the go-ahead run. Harding held on in the bottom of the inning to give McGaha win No. 500.

“When you get to a milestone like this, it means you’ve done it for a long time and you’ve had a lot of good players and assistant coaches that have come through,” McGaha said. “You remember that more than the wins.”

McGaha came to Harding in 2005. He said he remembers very little about his first win coaching the black and gold. He said all he remembers is helping the team shovel snow off the field for six hours before the game.

“I just remember our guys were dead tired and they somehow found a way to win,” McGaha said. “I remember the snow way more than anything about the game.”

In the years since, McGaha has seen mixed results on the field for the Bisons. He remembers the 2017 season in which the Bisons struggled to a 23-29 record as well as the 2011 season, when Harding won 42 games and the Gulf South Conference Tournament. McGaha recalls watching his team turn four double plays in the program’s first win in the NCAA Tournament that season.

Defense has been one major area of success for the Bisons under McGaha. The Bisons have fielded over .955 every year since 2011. In 2015, Harding led all Division II schools in fielding percentage.

“Coach is always pushing us to trust our process,” senior outfielder Ben Brauss said. “Teams that are successful are the teams that do not get bogged down in the routine, but are able to find motivation every day to be better.”

As his win total has changed over the years, so has his perspective on coaching. As a young coach in Missouri, McGaha said he was obsessed with wins and losses. Now, he focuses more on forming relationships with his players and building them into strong Christian men.

“Coach McGaha has taught me that life is about more than baseball,” junior pitcher Tanner Smith said. “He is preparing me to be a man of character one day in the workplace and as a husband and father.”

With the win, Harding now has a record of 16-11 (8-7) heading into what McGaha calls the easier half of the conference schedule. McGaha will look for win No. 501 when the Bisons take on Southern Nazarene University in a three- game series this weekend at Jerry Moore Field.