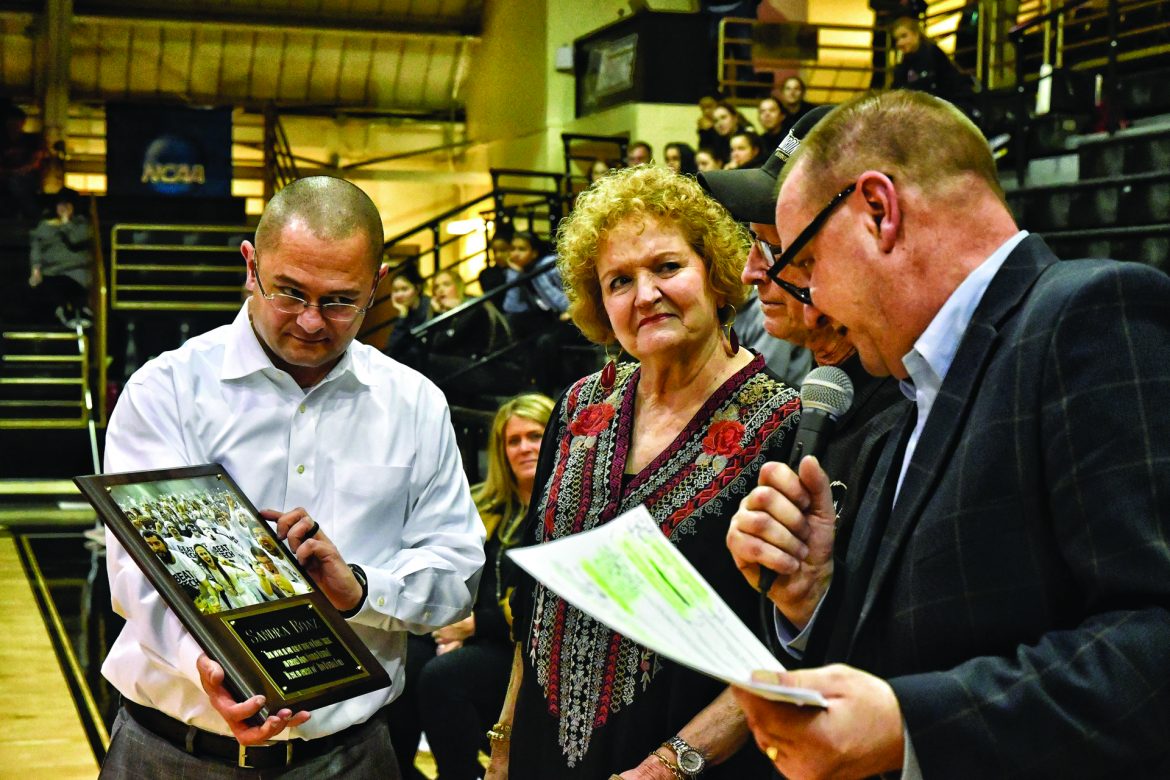 After 32 years, Sandra Boaz has decided to retire as the volunteer bookkeeper for the men’s basketball team.

In 1964, Boaz and her family moved to Searcy, Arkansas, so that her and her three other siblings could be enrolled at Harding Academy. Boaz’s father, Bill Harris, was a life insurance agent and officiated track and football but was an instrumental volunteer at both Harding Academy and the university.

Boaz and her husband, Ned Boaz, met at Harding University where he played basketball for the Bisons. After he graduated, he kept playing for a different team, and Boaz figured out the bookkeepers were cheating their team out of points. She then decided she was going to keep a book too so that she could keep the other bookkeepers honest. This is how her love for bookkeeping began.

She started out just substituting for the bookkeeper, Joe Pryor, in 1983. She said she was a nervous wreck when she would sub for him. The job requires a lot of concentration and what the bookkeeper has in their book is the last line of defense for the referees.

In 1987, she started doing the book full- time. She said for the first few years she was still a nervous wreck, and one of the fastest lessons she has learned while on the job was to always screw the lid back on her drinks because the basketballs fly around everywhere.

Becoming friends with the referees and the other table members has been a highlight for her; she said the referees are not happy about her retirement.

“It’s really a team effort,” Boaz said. “I don’t do anything on my own. This isn’t all about me. If I miss something, someone is always there to help me figure it out.”

Boaz’s spirit for volunteering was passed on to her from her father. Harris was the Bison Booster Club president in 1965 and was instrumental in starting the Harding Athletics Hall of Fame. She said keeping the book is mind-intensive and that she never knew the importance of a sharp pencil until she started bookkeeping. When women’s basketball started at Harding, she did both of the books until 20 years ago since the job takes so much concentration.

She said she will miss the camaraderie she has built with the referees and the people at the table. As bookkeeper, she said she is supposed to be unbiased, but the referees all know she is not.

Over the years, Boaz has become the No. 1 fan for the basketball teams. She watches practices and her and her husband always travel to the Great American Conference Tournament. She started making both the teams chocolate cakes in 2000 for their birthdays.

“She makes a chocolate-on-chocolate cake for us a couple of times a season, and they are always really good,” junior Jenni Nadeau, a guard for the women’s basketball team, said.

In 2015, she had to cut back on the amount of cakes she made because she was diagnosed with breast cancer. She planned all of her surgeries around the season. She thought she was going to have to quit that year but she pushed through and made it through the season. She has struggled in health some this year but said the only thing that would have caused her to miss a game was being put in the hospital.

She has been a dedicated fan and bookkeeper for both of the teams for 32 years and said she will not ever lose contact with them.

“It won’t hit me until the basketball season starts back up again,” Boaz said. “It’s just been my honor to serve.”