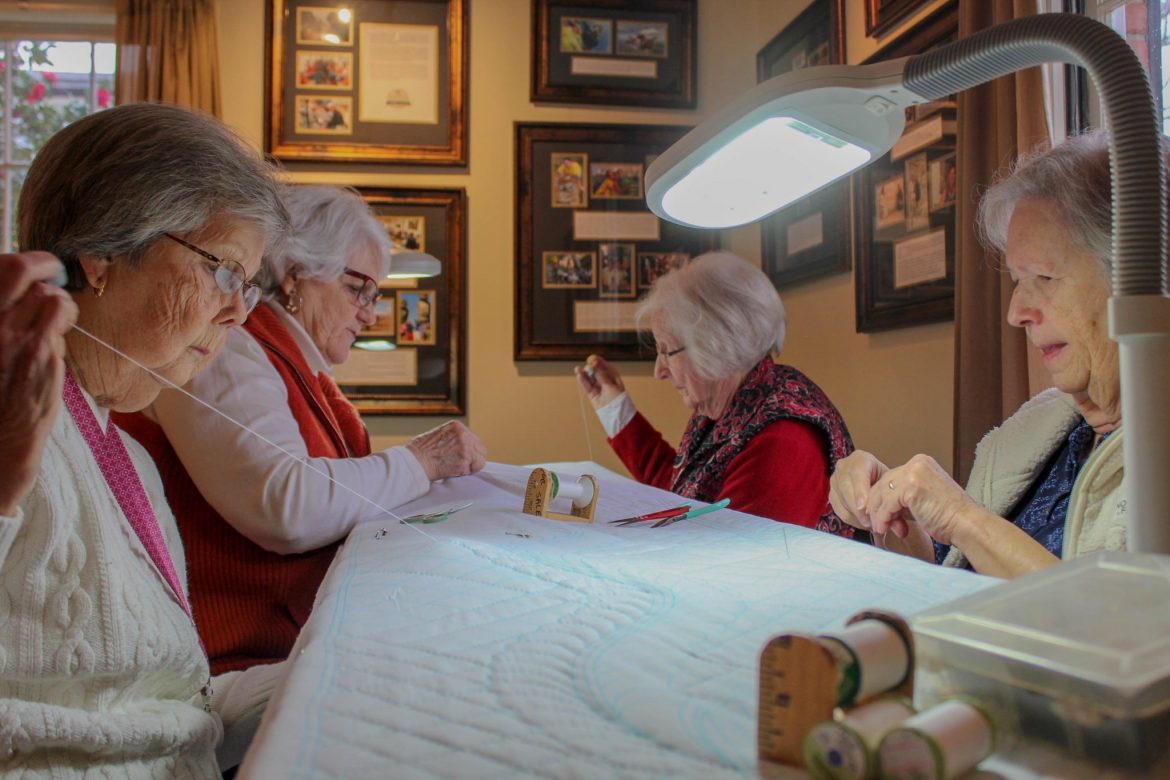 Intertwining their skills with their passion to help others, the tight-knit group People Interested in Service (PINS) raises money for Harding student scholarships by making and selling quilts. | Photo by Loren Williams

Intertwining their skills with their passion to help others, the tight-knit group People Interested in Service (PINS) raises money for Harding student scholarships by making and selling quilts.

The women of PINS have been using their crafting abilities for more than 15 years and work in cooperation with Women for Harding. Although the group does not exclusively quilt for Harding, they cherish their seamless relationship with the university. According to PINS member Billie Boustead, the group has raised more than $25,000 for scholarships.

In recent years, Harding has shown appreciation for the PINS group by offering them a place to meet and craft at the Harding History House. Former member, the late Charlotte Pigg, originally hosted the group in her home. They then moved to several different locations before finally settling at the History House.

“Through the years we’ve helped make a lot of money for Harding, so [they] thought we deserved a room,” Boustead said.

Meeting almost every Tuesday for four or more hours, the group has made over 25 different quilts, the majority of them tailored for a queen-sized bed. Each quilt that the PINS group creates takes roughly a year to finish, depending on the size and difficulty.

On top of this, most women in the group also work on quilting projects at home. Irene Crouch, who started quilting more than 40 years ago, refines her skills by constantly working on new projects.

“It’s just in and out like sewing, but it takes a lot of practice,” Crouch said. “You can’t just sit down and do it perfectly your first time. The more practice you get, the better you are.”

The quilting group not only offers a creative outlet for the women involved, but it also encourages camaraderie and fellowship. When the women of PINS gather, they share stories, experiences and skills to improve their work. PINS quilter Ruby Lane said that when the group was established, one of the first rules enacted was that there would be no negative discussions about other people. Instead, a fun and positive environment would be encouraged.

“We don’t gossip,” Lane said. “We solve the problems of the world.”

In total, eight-10 women make up the PINS group, each with years of experience and individual stories. Many of the women in the group also participate in other volunteer work at locations including the Barkin Barn, His House and the Carti Cancer Center.

The quilt the PINS group is currently working on will be finished in time for the Women for Harding’s luncheon in April. The luncheon will serve members of Women for Harding, scholarship students and the PINS quilters. The quilt will be displayed at the event and later on sold, with the proceeds all going toward scholarships. Soon after, the women of PINS will get back to work and start a new quilt stitched with love and hard work just like each one made before.

Making the ‘imaginary’ a reality

The State of the SA: Expressing our voices